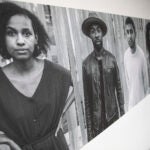 When Kristen Roupenian’s short story “Cat Person” went viral 14 months ago, the Harvard alumna (Ph.D. ’14 in English) and young author found the experience much like the topics she likes to write about: “disconcerting and anxiety-provoking.”

A little more than a year later, Roupenian has published “You Know You Want This,” a collection of short stories that examine themes of gender, girl-into-adulthood, violence, and power. Roupenian, who grew up outside of Boston, received her M.F.A. from the Helen Zell Writers’ Program at the University of Michigan.

She spoke with the Gazette in advance of appearing at the Harvard Book Store at 7 p.m. Thursday.

GAZETTE: You dedicated the book to your mom for teaching you “to love what scares you.” How did she do that?

ROUPENIAN: She modeled it, really. She is a huge cult horror fan and had a real spooky side underneath a perky demeanor. She was a big Stephen King fan. I’d steal the books off her shelf. She liked scary stories and she told them. Halloween in our house was the best. There was a form of entertainment about it. She was enthusiastic about it in a way that I didn’t realize had shaped me until I started writing.

GAZETTE: What kind of kid were you?

ROUPENIAN: At 6 or 7, I was unusually morbid. I was very bookish. I had giant glasses, and I was messy and my hair was everywhere, and I lost everything all the time, which I still do now. I was a wandering, daydreamy kid, but I did love scary stories. She had “Pet Sematery,” and the cover had the most gothic screaming cat’s face. I saw the cover and had nightmares just about the cover. Not that long after, at 10 or 11, I stole the book and I had nightmares again. As I got older, it became a solid point of contention between my mother and dad and me. He was more strict about what I should read and watch. I refused when they tried to tell me I couldn’t watch rated-R movies or read the books. We were always fighting about it. She was caught in the middle. I do remember a bad fight. She had bought me another Stephen King book, “Dolores Claiborne.” My dad was furious.

GAZETTE: Growing up to be a writer can be scary. How linear was your path?

ROUPENIAN: I wrote a lot in high school, then I took a break in college, when professors didn’t immediately recognize my genius. After Barnard [undergrad], I went into the Peace Corps in Kenya for two-plus years. When I got back, I had this deep desire to write about it. I was working 50 hours a week as a nanny in Cambridge, exhausted with writer’s block. I wanted to go back to Kenya, and wanted to read books about it. I worked for a time as a research coordinator in the endocrine unit of Mass. General Hospital, scheduling appointments and drawing blood, but I wanted to get the hell out of jobs I didn’t like and back to reading and learning so I ended up in grad school. I was frustrated with myself those early years in grad school. I had the most punishing imposter syndrome. I felt everyone else knew what they were doing. I couldn’t ask a question to learn anything for a long time. The place I was comfortable was talking about Kwani?, the literary magazine in Kenya, the project that would become my dissertation. It’s a contemporary magazine that came into existence at end of the dictatorship that I had experienced, and it used a mixed language called Sheng — Swahili and English, which captured being young and modern in Kenya. When I returned from Kenya in 2007, a violent presidential election shut down the hope and that flowering moment.

“Viscerally, the response of it going viral was disconcerting and anxiety-provoking.”

Glenda Carpio [professor of English and of African and African American Studies] was one of my advisers, as was Marc Shell [Irving Babbitt Professor of Comparative Literature and of English] and Biodun Jeyifo [professor of African and African American Studies and of Comparative Literature]. They let me go off on my own. I would disappear for six months and return with what I did. I just followed my own curiosity.

During my fellowship year, I realized I wasn’t suited to be an academic. I didn’t have the commitment or skills to get through that gauntlet. I seriously considered the State Department and turned down an invitation there to finish my dissertation. Then the government shut down and that was my off-ramp. It was also during the fellowship that I was able to finish a draft of a novel set in Kenya that drew on my dissertation research. I got an agent for it, and it went out to editors and got rejected, but it gave me a sense that this was something I could do if I committed to it. So I taught for a year in History and Literature and applied to M.F.A. programs.

GAZETTE: A little over a year ago, your short story “Cat Person” went viral. How did it happen?

ROUPENIAN: I did a ton of submitting in 2017 and got nowhere. I kept a famous spreadsheet of rejections. Well, I had a few tiny successes. I won a prize for a horror story, but everything had largely died down. When I finished my M.F.A., my agent connected with my professor, asking if I had a novel. I didn’t, but I gave her two stories. She took “Cat Person” out to all the literary mags and got rejections. The New Yorker held onto it for the longest. [When they later accepted it,] that phone call from my agent was one of the purest moments of joy in my life. It was so far beyond anything I had been anticipating. Even if it hadn’t gone viral, [being published in The New Yorker] changed my life overnight. There was a lull, and I had a faint feeling of “Huh, is that all it is?” Later that week the story went viral, and it had a life of its own.

GAZETTE: Your viral status dovetailed with the burgeoning #MeToo movement. What was that experience?

ROUPENIAN: Viscerally, the response of it going viral was disconcerting and anxiety-provoking. I felt like something was happening to me and my name, to words I’d written, that I had no control over. At the same time, in the tenuous future-fearing position of a graduate student, it gave me money and time and space to write what I want to write. That was grounding, and that was real and immediate.

One thing that’s hard to convey is the change in scale in my life. Over a year ago, the highest stakes of my work was my professor liking it or a small prize. Then to have the consequences of people liking or hating it, and thousands of tweets, I can’t wrap my head around it. It’s not a story I can tell yet. Not a lot of other people have experienced this, so I am feeling my way forward with my hands in front of my face.