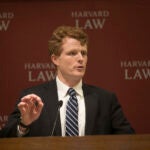 How do you regulate a business you don’t understand?

It’s a problem the U.S. government has not resolved or even faced, said experts at a Harvard Kennedy School forum, and until it does, big technology’s power “to shape our politics and even our public policy” will continue to grow unchecked.

“Anyone who’s been paying attention to news in the past year or so has woken up to the power of digital platforms and large technology companies,” said Nicco Mele, director of the Shorenstein Center on Media, Politics and Public Policy and moderator of “Big Tech and Democracy” on Wednesday evening. Just as bad, “if you asked members of Congress to articulate the problem, you’d get a wide range of views,” he said.

Harvard Law School Professor Susan Crawford said the largest tech companies are already powerful enough to have their own infrastructures, from Amazon’s private internet service to the health care systems now in the works at Amazon, Berkshire Hathaway, and JP Morgan Chase.

“And at a time when the U.S. subway system is falling apart, Amazon is building a heliport. Health care, transit, communication … these are all essential for America, yet these giant companies can build around them.” It illustrates something “profoundly wrong” with American government, she said.

Digital communication, especially, is “the most powerful and pervasive platform in the history of this planet,” said Shorenstein senior research fellow Tom Wheeler, the chairman of the FCC from 2013 to 2017. But currently the companies controlling it “are making the rules in their own best interest,” he said.

“We’re not talking about bad people, but [tech companies] are being presented with the opportunity to make their own rules, and nobody has repealed the laws of human nature.”
— Dipayan Ghosh

“If you have this underlying infrastructure that is essential to the operation of the 21st century, shouldn’t the public be represented in the rules of its operation?” Wheeler asked. “So far we have been letting it take care of itself, feeling that we will break the magic if we touch this. Well, it is time to touch it.”

Significantly adding to the government’s hands-off attitude has been the fact that digital savvy is scarce among members of Congress, the panelists pointed out. Only about 15 percent of the current Congress is technically trained, said Laura Manley, director of the Technology and Public Purpose Project at the Belfer Center, and when they need to make decisions on technological oversight, their staff members are likely to go to tech lobbyists for information.

Dipayan Ghosh, the Pozen Fellow at the Shorenstein Center, pointed out that many tech companies make money selling data about their customers’ use patterns, and have questionable records of respecting privacy rights. He noted that although Apple has said that it doesn’t collect data from customers in the U.S., it has no qualms working with the Chinese government to collect data on its citizens.

“It’s not as though they follow human rights values consistently through all their business practices,” Ghosh said.

People don’t even have to go online to have their data collected, said Ghosh, a former global privacy and public policy adviser for Facebook. When customers walk into a car dealership in Boston, he said, what they look at is tracked from the moment they come in, and their contact information is used to sign them up for a newsletter and then sold to a major data broker.

“I would argue for a policy regime that treats those areas in a way that protects the American consumer,” Ghosh said.

The panelists said there are no easy fixes: pricey lawyers can find loopholes in regulations, and even without those, effective competitors to the major digital companies aren’t likely to appear soon. “We’re not talking about bad people,” Wheeler said. “But they are being presented with the opportunity to make their own rules, and nobody has repealed the laws of human nature.”

But responding to an audience question about how government can keep up, Crawford did have one solid recommendation: “The older people need to leave. It really is a generational issue at this point.”

“Big Tech and Democracy” was sponsored by the Institute of Politics at the Harvard Kennedy School.