Yes, you can change the world, says Bryan Stevenson 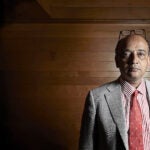 Doing so is both a responsibility and a possibility, he tells Kennedy School audience

When lawyer and social activist Bryan Stevenson, founder of the Equal Justice Initiative, spoke at Harvard Kennedy School Tuesday evening, his topic was nothing less than changing the world, something that he urged the capacity crowd to think of as both a responsibility and a possibility.

The audience for Stevenson’s Edwin L. Godkin Lecture, “Justice and the Power of Narrative,” included newly elected members of the House of Representatives in town for the Kennedy School’s bipartisan governmental insights program.

“I see you as people interested in solving problems,” Stevenson, M.P.P./J.D. ’85, told the audience at the JFK Jr. Forum, as he recalled his own experiences at Harvard. “This is surreal because I went up and down these same stairs so many times as a student, not sure I was in the right place. To see you students still at it is incredibly exciting.”

Stevenson began by citing a few sobering statistics. The Real Justice PAC projects that one in three newborn black males, and one in six Latino males, will go to prison in their lifetimes, and the percentage of women in jails has increased markedly. “We just seem to be comfortable with that statistic, and almost nobody was talking about this in the midterms,” he said. Yet he promised to use his hour at Harvard to speak of solutions, rather than problems.

Stevenson’s Equal Justice Initiative is the nonprofit organization behind the recently opened National Memorial for Peace and Justice in Alabama, which is dedicated to the victims of white supremacy in this country through history.

If someone really wants to change the world, Stevenson said, there are four guidelines to keep in mind. The first is that you need to commit yourself to, and stay “proximate” to, the poor and marginalized in society. “You can’t change the world by staying on Harvard’s campus,” he said. “When you get close enough to the poor that you can wrap your arms around them, that’s when you’re in a position to make a statement about their humanity.”

“When you get close enough to the poor that you can wrap your arms around them, that’s when you’re in a position to make a statement about their humanity.”
— Bryan Stevenson

Stevenson cited one of his early career experiences, working on death row at a Georgia prison. At one point, he had a long talk with a condemned prisoner, who was then accosted by guards because the talk had run overtime. “They put the shackles around his ankles and slammed him against the door, and the man did one thing I will never forget: He threw his head back and started singing a hymn. You could hear the chains clanking as they pushed him down the hallway, and you could hear him singing about higher ground.”

This experience, Stevenson said, was what brought him to Harvard. “I realized my journey was tied to his journey. I came to Harvard and you could not get me out of the Law School library. If I have ever helped anybody, it is because I got proximate to a condemned man, and I heard him sing.”

The second requirement, he said, is a willingness to change the narratives that underline society. “We have mass incarceration in this country because of a misguided war on drugs. We said that addicts were criminals instead of saying they had a health problem. That’s what I call the politics of fear and anger.”

Another lingering narrative, he said, is the one that created slavery. “We still live in a time when racial difference is everywhere. I hate to tell the black and brown students here that it doesn’t matter that you have a Harvard degree. You will still be going to places in this country where you will be considered dangerous because of your color.”

Finally, he said, students and world-changers have the twin responsibilities to stay hopeful and to do things they find uncomfortable and inconvenient. “I tried to research my way out of that one,” he said. “I tried to find an example where justice prevailed, equality triumphed, and nobody did anything. But there weren’t any.”

He cited another story as reason for hope. He once represented a boy who had accidentally shot his mother’s abusive boyfriend. The boy was tried as an adult and sent to prison, where he was raped and beaten. “We got that little boy to a family that embraced him, and now he’s getting a master’s in engineering.”

But until more people work on changing the narrative, he said, such victories may be the exception to the rule. “I’ve had my moments of great joy, but also anguish and difficulty. That’s because we still live in a society that treats you better if you are rich and guilty than if you are poor and innocent.”