The mystery of the medicine man 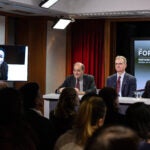 The names may vary — medicine man, witch doctor, holy man, prophet — but the notion of the shaman, someone who uses trance to commune with the supernatural and effect real-world change, is one that crosses virtually all cultural boundaries.

The question of why is among the central puzzles of anthropology.

At least part of the answer lies with the way humans — from hunter-gatherer tribes in the rainforest to people living in a modern city — are wired to think about the world and other humans, contends Manvir Singh, a graduate student in the Department of Human Evolutionary Biology in the Graduate School of Arts and Sciences, whose paper was published in Behavioral and Brain Sciences.

Singh’s paper, along with more than two dozen commentaries from researchers in a host of fields, argues that shamanism develops as specialists compete to provide magical services to their community. The outcome is a set of traditions that hacks people’s psychological biases to convince them that they can control the uncertain.

“The theory is that there are important things we really want to have control over — calling rain, summoning animals, healing illness,” he said. “All around the world, people believe that these important, uncertain outcomes are influenced by invisible forces — gods, witches, their ancestors, fairies, and more. But a shaman says, ‘I can control that. I can talk to fairies. I can see signs of witches. I can be possessed by a god or speak to them.’”

To understand how shamanism emerges, Singh first had to address a nagging question in anthropology — what exactly is a shaman?

“It’s a hugely debated and contested idea,” he said. “But in the most general terms, a shaman is a person in a group who enters a type of trance — a very foreign behavioral and psychological state — to provide services to the community.”

Those services, Singh said, could range from healing disease to exorcising evil spirits to telling fortunes, or even changing the weather.

The key to the community’s trust that a shaman has those abilities, Singh said, comes from the belief that the shaman is transformed into something more than human, and able to interact with supernatural forces. That transformation can be permanent, like the supposed acquisition of new organs, or temporary, as when shamans dance for hours and enter exhausted trance states.

“There are several lines of research that show people believe other people have different powers when those people diverge from humanity,” he said. “One great example of this is the superhero narrative. In those stories, the reader has to believe this person has powers normal humans don’t, so the writers often include an origin myth — this person was bitten by a radioactive spider, or they have some genetic mutation, or they’re actually an alien.”

In different societies, shamans may claim that they create a new skeleton, are devoured and resurrected, or magically alter their eyes so they can see spirits.

“To become one of these people who can oversee these uncertain events, you have to undergo this transformation. That creates two classes of individuals — those who have been transformed and those who have not,” Singh said. “This creates a separate class of individuals where there is an entry requirement, and where they have near-exclusive jurisdiction over these services.”

That professionalization, Singh said, is different from the loose specialization that often appears in small-scale societies. While some members of the community might have a talent for making canoes or bows, there is no social barrier that prevents another person from making his or her own canoe or bow.

“Meanwhile for shamans, it quickly develops into a system where, to become a shaman, you have to undergo a transformative ritual — there are these entry requirements,” he said.

Going forward, Singh said he hopes to explore the variety of powers shamans claim and how those alleged supernatural abilities translate to power in their communities. He is also working on understanding why other near-universal cultural practices develop, including music and belief in witchcraft.

“Shamanism is only one of countless cultural practices that emerge nearly everywhere, yet exhibit very particular and odd features,” he said. “These social and cultural universals — punitive justice, dance music, witchcraft, initiation ceremonies, and so on — are among the most fundamental puzzles of anthropology. Given how much we’ve come to know about human psychology and sociality, now is an exciting time to investigate why human societies everywhere look so strikingly similar.”