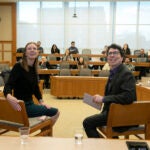 A professor of philosophy and law at New York University and the “Ethicist” columnist for The New York Times Magazine, Kwame Anthony Appiah will touch on themes from his new book, “The Lies That Bind: Rethinking Identity,” when he visits Harvard Medical School Thursday to deliver this year’s George W. Gay Lecture.

The Gazette spoke to Appiah about how misconceptions have skewed our understandings of ourselves, and how a more constructive approach to identity could help foster greater harmony.

GAZETTE: In your new book, you argue that the collective identities that help define us are almost all rooted in false assumptions. What are some examples you like to cite?

APPIAH: I think race involves usually mistaken or misleading ideas about biology. It involves the idea that the social identity of black, white, Hispanic, Asian-American, and so on refers to some important biological property, and that isn’t true. More importantly, perhaps, it isn’t true that people of any particular race have nearly as much in common as I think people often assume. We are susceptible with race, and with almost all identities, to what psychologists would call essentialism, the thinking that just because people share a label they share some deep kind of inner properties which are very important in explaining how they behave and who they are. And in general I don’t think that’s true. It’s not true about race, it’s not true about gender, sexual orientation, religion, class, and so on. All of these groups are internally quite diverse. One of the reasons they’re diverse is that people have mixtures of them. Even when you’ve specified all the social identities that define a person for practical purposes in their society, you won’t have fixed exactly who they are.

GAZETTE: You say even the idea of Western civilization is misguided.

APPIAH: One reason it’s misguided is that the range of people who encompass what people call the West is astonishing. There is astonishing diversity from Hungary to Iceland to the United States. We’re all supposed to be Westerners. I also think it’s a mistake because people think when they talk about Western civilization, they’re thinking that all those people not only have something deep in common but that the deep thing they have in common has something to do with the high civilizations of Greece and Rome and Western Europe. So they think there’s some kind of bond among all these people that has something to do with Plato and Aristotle, Dante, Kant, John Stuart Mill, Hegel, and on and on. And that’s not true either because vast numbers of people in the West historically were not literate, did not know about any of those things. And so saying they’re all Westerners doesn’t really tell you very much. And finally, people tend to think of the West as involving certain kinds of values, like democracy and toleration and respect for science. And none of those things is either uniquely Western or universally endorsed in the West, especially in the past. Toleration is a relatively modern invention. Most of the West was not democratic at all for much of its history.

So I’m in favor of democracy and toleration, but I don’t think it’s a good idea to think of those as things that are particularly tightly connected to being what we call Western. And if we want them to be, we need to strive for them. We didn’t inherit them. And India was a democracy before Spain was. There are parts of Europe identified as Western that haven’t been democratic for almost all of their modern history. And given the current set of attitudes to global warming in parts of the North Atlantic world, I wouldn’t say we are particularly a civilization that is respectful of science.

“The world is more interesting because people are not all the same.”

GAZETTE: Why are people so willing to embrace identities built on flimsy foundations — why do they remain attractive even today?

APPIAH: Identities are associated with bad things, not just intellectual errors but moral disasters — racism, religious bigotry, sexism, homophobia. But we should remember they also can be the basis of useful things. One reason trans people ought to be able to be recognized as trans men and trans women is because they find being a man or a woman useful categories for them. And national identities, though they involve all kinds of misunderstandings, are also the basis of strands of solidarity that bring countries together to do difficult things. The nation is a community of strangers, and so is the Catholic church, so is Europe, so is the West. And strangers will do anything together if they have to do it by way of an identification.

Fortunately, we’re sort of built to do it. For whatever reason we came out of our evolution capable of forming solidarities with large numbers of people we don’t know on the basis of these forms of identity. Unfortunately, part of that psychological package includes a tendency to find it easiest to form solidarities by demonizing outsiders; we have a kind of in-group, out-group psychology. But providing we can tamp down the dangerous side of the out-group part of it, we can use the in-group part of it to do lots of good things. And we are going to be psychologically drawn to the in-group side of it, because that’s the kind of social creature that a human being is. Human beings spontaneously form identifications and identities without much difficulty. That’s one reason I think it would be a bad idea for us to try to live without identity, because it’s a bad idea to do things that are psychologically impossible.

GAZETTE: How do we as a society put shared identities to work in a productive way?

APPIAH: One way you can get people to mobilize around shared identities is for them to spend time together — not with everybody of that identity, because all of these large identities and communities are strangers to each other. Spending time together with your fellow Americans doesn’t mean spending your time with 330 million people. It means spending your time with the people in your town, or your community, doing things with an eye to the good of the nation.

With politics, people divide using identities. And at the moment some of those political divisions are very poisonous, and have been made so by the deliberate policies of political leaders. That’s a bad thing and we should condemn them for it. And we should try in our own lives not to think of people [from other parties] as demons and devils but as fellow Americans with different views about some things, and think about how we can do things together. That requires us tamping down our partisan identities and ramping up our national identity. Our psychology allows for that because it allows solidarity on the basis of identity as well as division. The enterprise of the republic is that we are supposed to be looking out for it together. Religious identities can also be used as the basis of solidarity across party lines.

GAZETTE: Another theme in your work is that we need to emphasize our common humanity, but do not have to reject our differences.

APPIAH: It’s a simple idea, and I think we can do it. Each of our identities contains internal diversities, but humanity is also diverse. From the point of view of a cosmopolitan like myself that’s a terrific thing. The world is more interesting because people are not all the same. I wouldn’t want to listen only to music composed in one place at one time. I wouldn’t want to only read novels written in New York City. I think of that sense of humanity as drawing people together not so much by the fact that we’re all the same but by the fact that we’re all different. In recognizing your humanity I don’t have to think of you as identical to me. I can value the fact that when we’re both human we’re also different in interesting ways, and that those differences can be a source of excitement and pleasure as we interact.