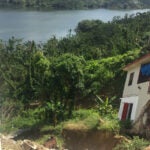 History books are filled with accounts of the past, shaped by the perspectives of those who wrote them. A reader’s imagination may conjure events across the miles and millennia based on those accounts, but their own life experiences and interests may influence their sense of history.

A fuller picture is guided by scholars in classrooms where lessons are shaped by a lifetime devoted to study. And few historical events are as widely studied — and discussed — as those found in the Bible.

Bringing biblical history to life is exactly the goal of Harvard Divinity School (HDS) Professor Giovanni Bazzana. That’s why he sought to add a unique component to his course “Historical Jesus.” Bazzana knew that traveling to Magdala to trace the places Jesus of Nazareth is believed to have walked during his lifetime would be an invaluable experience that his students couldn’t get inside the classroom. Thanks to generous philanthropic support, he was able to travel to Israel with 12 of them last summer.

The goal was to consider who Jesus Christ was as a man beyond — and before — the writings of the New Testament, and to consider how the place and the times may have shaped those accounts. Bazzana is cognizant that most of the conversation surrounding the life and times of Jesus is dominated by text, so tilting the lens to give students a fresh perspective adds another dimension to their studies and how history is constructed.

“There is this longstanding conversation in New Testament studies about who Jesus really was. All we have are accounts by other people,” said Bazzana, referring to what he calls the scribe perspective. “How reliable are they, and what is the relationship between the accounts and the historical figure? With students, the goal of the course is to think about this problem.”

Bazzana said the main feature of the trip was attending an archaeological dig in the ancient city of Magdala, situated along the Sea of Galilee. It had been the site of Jewish ritual baths, according to Bazzana, and workers were in the process of excavating beneath granite pavement set in the first century. As the team members, assisted by the students, went deeper, they discovered a swimming pool dated to the time of Christ — a place Jesus may have been.

“It’s another interesting wrinkle,” said Bazzana. “Obviously, archaeologists would love to say they retrieve the past as it was, but in truth, how much of an intervention has there been about the diffraction of Jesus? In a sense, when they have to give an account, there’s a diffraction or interpretation of who he was.”

The lens through which history is relayed is a focus of much of Bazzana’s class, one that student Judy Beals learned to appreciate more fully following the class trip to Israel.

“The class was wonderful,” said Beals, “but the trip brought it to life.”

A former prosecutor who works part-time at Harvard Divinity School, Beals said the class challenged her assumptions about what history knows and can relay.

“I came away from the class convinced the quest for historical Jesus is largely unattainable and isn’t important, that there are few facts and little is actually known,” said Beals, an M.Div. candidate. “But then I had never been to Israel or an archaeological site. I think, for me, it turned my skepticism toward discussion and imagination. There’s something to being in an archaeological site and unearthing coins and it coming to life.”

Another student, Britney Foster, had traveled previously to Greece and Turkey with HDS, but participating in an archeological dig in Israel expanded her intellectual imagination.

“I had read the Bible in black and white before. Now I read the Bible in color,” said the M.Div. candidate. “This trip brought the Bible to life in ways I couldn’t have even imagined. It connected the Hebrew Bible and the New Testament.”

The class and Bazzana were able to explore beyond Magdala. They went to other dig sites in Galilee that are now largely tourist attractions, and traveled to Jerusalem, where they attended a conference of mostly Hebrew and Palestinian scholars, said Bazzana. The goal was a multifaceted presentation of ideas, “which is not easy to have in Israel,” he said.

Beals said among the greatest lessons of the trip was understanding how stories are told within the construct of time and place, and how they evolve over time. But the best part, she said, was hunkering down in the earth, wilting in the heat, with the whiff of nearby salt water giving her a true sense of history — and the belief that the present is simply a continuation of the past. Seeing firsthand pottery and coins unearthed, objects touched by those who had lived thousands of years before her, had a profound effect.

“It was bounded by material evidence,” said Beals. “It was bounded by discipline and scholarship. I could imagine this person. Jesus did live, he did die. He came alive to me in a very different way. I was thrilled.”

While Bazzana said he doesn’t plan another trip for the current school year, he may for the next. Given that his goal is to encourage his students to consider perspective when it comes to scribing history, Bazzana sees the opportunity as enhancing the classroom experience.

“It’s great for them to get to touch with their hands how continuous concerns are shaping even the space today, even the spaces of the past,” said Bazzana.