Finding perspective in the unexpected 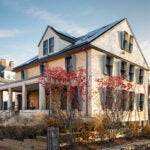 A model of efficiency

Midyear graduates share lessons learned, both at Harvard and during time away

When first-year students enter the gates of the Yard, most expect to walk out four years later as graduates. But, of course, life doesn’t always go as expected. Plans change as unforeseen challenges and opportunities arise.

For many of the 117 students honored at Friday’s Midyear Graduates Recognition Ceremony, unexpected circumstances meant taking off a semester or more from Harvard before returning to finish their studies, while others were graduating early due to advanced standing. All were joined by faculty, friends, and family for a ceremony and reception at the Student Organization Center at Hilles, which included remarks by Danoff Dean of Harvard College Rakesh Khurana and lecturer on organismic and evolutionary biology Andrew Berry.

Three of the graduates spoke with the Gazette about their Harvard journeys and what they learned from their time away from campus.

As a child in Portland, Ore., Hanaa Masalmeh would often search in her family’s pantry for “normal” food instead of the eggplant pickles and other Syrian delicacies her immigrant parents kept stocked. Her desire to fit in was in constant tension with her parents’ insistence that she learn Arabic and go to Islamic school every Sunday. But in time she came to embrace her cultural heritage and find great strength in her identity as a Syrian-American Muslim.

“I realized that, being visibly Muslim, my very presence is an unofficial ambassadorship. For better or worse, I’m influencing people’s perceptions of Muslims and Arabs. That’s a lot of pressure to deal with, but ultimately I learned how to turn that external pressure into internal motivation,” she said.

At Harvard, Masalmeh took advantage of opportunities to learn about different cultures, both in her personal relationships and through her studies. She concentrated in anthropology and learned Hebrew, continuing an affinity for languages that began with Arabic and that grew to include Spanish, French, and German. She studied abroad in South Africa, Italy, Israel, and Turkey, among other countries.

This past year, Masalmeh put her Arabic and German to use when she spent a semester in Germany studying Syrian refugee integration there, which eventually became the topic of her senior thesis. “I wanted to see how these things worked for myself,” she said. “I have a lot of family who escaped Syria and fled to Europe, and I felt that news coverage wasn’t doing justice to their experiences.”

Another highlight of her time at Harvard was stand-up comedy, a talent she discovered in high school and rekindled in college.

“I’ve never had to make up a story for stand-up because my life is full of crazy situations that are perfect for comedy,” Masalmeh said. “Our society has conditioned us to think that being a minority is an inherent disadvantage, but I see my identity as an incredible advantage. It gives me a unique perspective and, more importantly, it gives me empathy for those who don’t fit in. That’s ultimately what makes good comedy — and a good life philosophy.”

While she hopes to continue writing and performing comedy, Masalmeh is clear about her professional goals: attending law school and eventually working for the U.S. government, possibly in Middle Eastern and European relations.

Looking back on her time at Harvard, she considers her stay a period of tremendous personal growth. “Experience is nothing more than making mistakes and learning from them. It’s like the Japanese proverb: If you fall down seven times, you stand up eight,” Masalmeh said. “I pushed myself every second to be a better friend, a better scholar, and a better citizen of the world.”

For Carolina Brettler, the things she didn’t do at Harvard ended up being among the most defining.

Eager to get involved in student life on campus, she attempted to join several organizations only to be rejected during the highly competitive application (or “comp”) process. Hearing no, and hearing it often, was not easy.

“That was a huge learning experience for me, and in the process I ended up joining groups that I might not have thought of at first,” she said.

Brettler ultimately found her niche as a member of the Crimson Key Society and a tutor for the public-speaking course “Expos 40.” Her work as a peer speaking tutor led to another defining moment: giving the Ivy Oration at Class Day last spring, a speech she infused with both humor and wisdom about learning to cope with rejection.

But the experience that changed the trajectory of her time at Harvard came after her first year, when an illness forced her to spend 18 months away from campus. Searching for ways to keep her mind busy while home in New York City, she began taking film classes, watched hundreds of movies, wrote scripts, and filmed and edited what she could using only her phone and computer.

“When I got back to Harvard, I studied economics, which I absolutely love, but I also decided to explore my passion for film and directing — so in that sense it was a blessing in disguise,” she said. “It also gave me a new appreciation for being at Harvard. I feel grateful in a way that I don’t think would have been possible without having to step away from it.”

Brettler will soon start a job in asset management and plans to continue pursuing film whenever she can. “It’s something that I don’t want to push aside because it balances out the way I think about things. And it also just makes me really happy.”

Family is everything to Audria Amirian. Growing up in a tight-knit Armenian community in Glendale, Calif., she was surrounded by scores of aunts, uncles, and cousins who lived within a few minutes of her house.

Amirian’s parents both emigrated from Iran. Her father fled to the U.S. around the time of the Iranian Revolution, but it was five more years before her mother could join him, only after establishing refugee status in Austria.

“I can’t even wrap my head around everything they’ve been through,” she said. “Thinking about where they’ve come from, it’s meant a lot for me to have had the luck and privilege to come here.”

Amirian struggled initially to adapt to her new home at Harvard, but she eventually found community through friendships formed at Thayer Hall and Mather House, and purpose through involvement in extracurricular activities. She learned Latin dance, joined Harvard Undergraduate Women in Business, helped revive the defunct Armenian Students’ Association, and became chair of the Education Policy Group at the Institute of Politics, building on an interest that was sparked as a student member on her school district’s board of education.

But Amirian had to put everything on hold during her senior fall, taking a leave because of health issues. While it wasn’t easy to pause her life at Harvard, she found comfort in the support of her family and her Harvard community, particularly her House resident dean.

“My dad has always said it’s your health, your education, and your family — in that order. That’s how you should live your life, and that’s how I’ve done it,” she said.

Like Brettler, she is grateful for the time off, which helped crystallize what she wants to do with her life. “I figured out that you’ve got to do what you love, and for me that’s economic development.”

Amirian is applying for jobs in Los Angeles and hopes to work in local or county government, where she can help solve infrastructure problems, particularly as the city prepares to host the World Cup and the Olympics. While she’s excited to begin the next chapter of her life, she’s not ready to fully turn the page on Harvard.

“I don’t think about it as being done,” she said. “I want it to be woven throughout my life.” 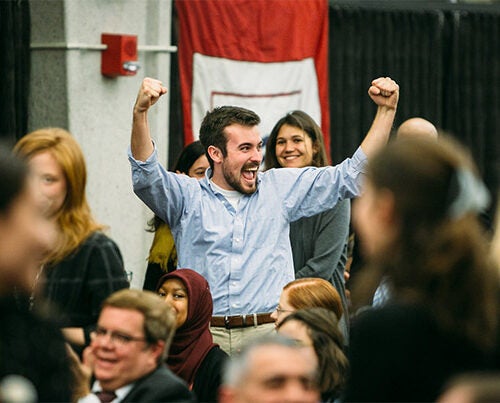