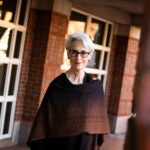 A new chief at Center for Public Leadership

A plan designed by a team of Harvard University students to create a reliable source of renewable, affordable electricity for a Puerto Rican community hammered in 2017 by Hurricane Maria has moved a step closer to reality.

The proposal calls for revitalizing three nearby, long-neglected hydroelectric units to generate inexpensive, reliable electricity that emits virtually no greenhouse gases. The students’ vision is that a community-based electric cooperative would own the power facility and ensure that local residents control new jobs and other benefits created by the project.

The project began in January 2018 when Jacobs dispatched one of six students on the team, Alyssa Curran, M.U.P. ’18, to the island. Curran toured Puerto Rico, including the storm-ravaged inland community of Utuado, and observed the destruction of homes and commercial buildings, roads, and electric infrastructure. She also connected with Unidos por Utuado, one of many community groups mobilizing disaster relief on the island. At the time, “Climate Solutions Living Lab” was considering several projects in Puerto Rico, and Curran, in consultation with Jacobs, decided one of those should focus on Utuado because of the barriers it faced to storm recovery.

Hurricane Maria decimated Puerto Rico. A Harvard T.H. Chan School of Public Health study found that the number of deaths related to the September 2017 storm was much larger than the official estimates, and there were 4,645 additional deaths in the three-month period following the storm, which is believed to have caused more than $90 billion in damage. Electric service was only recently restored to the entire island. In Utuado, an isolated mountain community of approximately 30,000, about 30 percent of households were without electricity and safe running water seven months after the storm struck.

Back at Harvard, the students participating in the spring 2018 class who were assigned to the Utuado project proposed that rather than build a new power source for the community, they would recycle an old one.

The plan was this: Utuado would create an electric cooperative to acquire and refurbish three legacy hydroelectric units on lakes Dos Bocas and Caonillas and install a pumped solar system. In addition to providing reliable energy, the facility would save money. Puerto Rican’s electric bills are the highest in the U.S. next to Hawaii, the students’ research found, and they believed that adopting their plan could slash electric rates to about 8 cents per kWh, compared with the approximately 20 cents per kWh they now pay.

The benefits to the climate were also clear, according to the students. Currently, 98 percent of Puerto Rico’s electricity is generated by fossil fuels. However, the students estimated the hydroelectric plants would generate approximately 26.5 megawatts of clean energy, with a potential offset of about 115,000 tons of carbon dioxide equivalents in year one and an average of 105,000 tons of offsets per year over a 20-year time period. Reducing that amount of emissions annually is equivalent to taking more than 22,000 vehicles off the road, or the average energy use of more than 11,000 homes.

The Puerto Rico project is one of nine projects developed in the course since its 2017 launch, as part of Harvard’s ambitious climate action goals and Living Lab initiative.

The innovative course is a partnership between the Office for Sustainability and Harvard Law School and was developed to engage multidisciplinary teams of graduate students in working together to test innovative solutions or renewable energy investments — such as the Puerto Rico project — that achieve actual emissions reductions beyond the Harvard campus while also achieving other social, economic, and health benefits.

Under Jacobs’ leadership, the Climate Solutions Living Lab engages with senior faculty experts from across Harvard’s professional Schools as well as outside experts, and operates like a professional project development team. The teams of six students are comprised of master’s and doctoral students from Harvard Business School (HBS), Harvard Chan School, John A. Paulson School of Engineering and Applied Sciences (SEAS), Law School, Harvard Kennedy School (HKS), Graduate School of Design, and Graduate School of Arts and Sciences.

Because the students are addressing a real problem, Jacobs said, their proposals have to work in the real world.

“The real problem we’re addressing is climate change,” Jacobs said. “The task before the students is to develop projects that will accomplish quantifiable greenhouse gas emissions reductions, as well as quantifiable public health benefits.”

The proposals also have to be innovative, replicable, scalable and most of all, feasible. They must be “implementable for a large organization or business that has set an aggressive climate goal and is looking to offset its emissions,” Jacobs said.

Curran, who now works for a planning and development firm in New York, called the course “a perfect combination of research and implementation” that prepared her for life after Harvard. The Puerto Rico team had to work collaboratively to find the solutions to each legal, engineering, design, and public health problem on the fly, just as they would have in the real world.

The multidisciplinary team approach turned out to be key to arriving at the implementation plan. The team required the expertise of all of the students, Curran said, to recognize the potential of the underused hydroelectric assets, lay out the steps to revitalize them, and create the electric cooperative to operate the assets.

Even though the semester is over, the project continues. Curran has taken a seat on the board of Unidos por Utuado and Jacobs’ Environmental Law & Policy Clinic is continuing to perform research and provide advice to the community to help move the project forward.

Unidos por Utuado will be responsible for raising funds to develop and implement the students’ ideas. Executive Director C.P. Smith praised the Living Lab model and the Puerto Rico team’s work. He said the project team’s research, financial analysis, and business case for the electric cooperative and its power assets laid the critical groundwork.

“It’s vital for us getting out of the gate, with a message that is not only compelling but has sufficient research behind it to allow other stakeholders and supporters to go in with confidence,” Smith said.