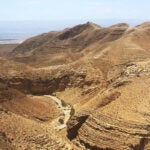 Last spring, while other students were getting ready to relax and recharge during their College break, Seokmin Oh ’21 and Susie Clements ’19 were on a plane to Jackson, Miss., the first stop on their journey to trace the history of the Civil Rights Movement.

With different reasons for making the journey, Oh and Clements both said the experience gave them a new perspective on their place in the world.

Oh, whose family immigrated to Southern California from South Korea when he was 9 years old, described the South as “something that strikes in your heart and your soul.” Both he and Clements were deeply affected by the people they met — including Elizabeth Eckford, a member of the Little Rock Nine — and the places they saw, such as the seemingly endless plantations that can echo as remnants of segregation and slavery.

“What really stuck with me was not so much the timeline of events we learned about, but meeting the people involved in the Civil Rights Movement and connecting with them on a human level — listening to their experiences and the way they spoke, but also what they didn’t say,” Clements said.

“This experience taught me that every human being could make a difference as long as they have the determination to do so. Going forward, I know that I can start doing little things that might seem insignificant at the moment but become bigger when I live them out day by day,” Oh said.

Oh and Clements were sponsored on their journey by the Harvard Alumni Association (HAA), which offers undergraduates several opportunities to travel during spring break. They joined more than 20 alumni for the weeklong trip through Mississippi, Arkansas, Tennessee, and Alabama, stopping at Bryant’s Grocery, the 16th Street Baptist Church, the Lorraine Motel, the Edmund Pettus Bridge, and other locations that played critical roles in the Civil Rights Movement. At many places, they met with activists who had worked with Martin Luther King Jr., Medgar Evers, and other rights leaders in the 1950s and ’60s. They also visited with representatives from organizations continuing to drive Civil Rights work, such as the Southern Poverty Law Center, the Emmett Till Interpretive Center, and the Equal Justice Initiative.

One stop was Little Rock Central High School, a flashpoint for Civil Rights 61 years ago when the nine African-American students enrolled in the all-white school were met with violence when they tried to enter the building. Clements and Oh arrived at the school on March 14 — the same day as a national school walkout organized by the student survivors of the Marjory Stoneman Douglas High School shooting.

“It was powerful being at Central High during the walkout,” said Clements. “We arrived just as the students were leaving the building and got to walk out with them. It was a moment that brought out a lot of emotions, not only from the high school students, but for a lot of the travelers too.”

Clements grew up in St. Andrews, Scotland, where her father introduced her to jazz performer Louis Armstrong on their regular drives to her clarinet lessons. As a history and literature concentrator at Harvard, she said she has been challenged “to think about race in a way I’ve never done, but going to the Deep South did something different.”

The cross-generational nature of the trip also led to new perspectives and a deeper understanding of America in the 20th century. “Because most of the group were alumni who had lived through this era, there was more of an effort to talk about and reflect on everything we saw,” she said.

Oh ranked the trip as the most meaningful experience he has had at Harvard. “This is learning that you just can’t do unless you go out and experience it, and doing it now will change the rest of your life,” said Oh. “When you’re 70, you can still make a difference, but how much more could you have done if you had this experience in your 20s?”

On the Road to Civil Rights will be one of three spring break trips offered by the HAA in March 2019 and will be led by Harvard lecturer Timothy Patrick McCarthy.

In addition, the popular annual journey for students and alumni in Greece with Professor Gregory Nagy will explore the nation’s famous archaeological sites, museums, and ancient history. And on a trip to Egypt, Professor Ali Asani will take travelers through Islamic Cairo and the pyramids of Giza.

Interested College students should submit applications by Jan. 7 to be considered for scholarships.