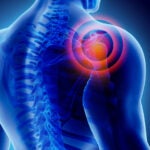 Scientists have discovered that irisin, a hormone released by muscles during exercise, directly acts on key regulatory cells that control the breakdown and formation of bone. The researchers say this insight raises the prospect of new treatments for bone-thinning disorders such as osteoporosis.

Reporting in Cell, Bruce Spiegelman and colleagues at Dana-Farber Cancer Institute say they have for the first time identified a molecular receptor for irisin, which Spiegelman discovered in 2012. The receptor allows irisin to bind to and activate osteocytes, the most abundant cell type in adult human bone.

Spiegelman, the Stanley J. Korsmeyer Professor of Cell Biology and Medicine at Harvard Medical School, and others have proposed that the irisin hormone serves as a link between exercise and its beneficial effects on health, including burning fat, strengthening bones, and protecting against neurodegenerative diseases.

Until now, however, researchers hadn’t identified a specific molecular receptor for irisin — in effect, a docking structure allowing irisin to bind to cells and tissues. They are now reporting that the irisin receptor is a group of proteins called integrins situated on the surface of osteocytes. Osteocytes are cells that act as the “command and control unit” for bone remodeling — that is, the loss and replenishment of bone that occurs both normally and in pathological states, said Clifford J. Rosen, director of the Center for Clinical and Translational Research at Maine Medical Center Research Institute. Rosen, a co-author of the report, is a leading expert in research on bone development and diseases.

Some research previously found that intermittent injections of irisin increased bone density and strength in mice. Now that Spiegelman’s group has shown that irisin targets the osteocyte through a specific receptor, the irisin-bone connection can be explored more mechanistically.

Some experiments reported in the Cell article were designed to explore the potential role of irisin in treating osteoporosis, the thinning and weakening of bone that occurs with age, as well as in women with the loss of estrogen production.

Osteocytes — the master bone regulator cells — gradually die off with age, and their loss is believed to be a cause of age-related osteoporosis. In cell culture, the scientists observed that treating osteocytes with irisin protected them from being killed by hydrogen peroxide — a simulation of age-related death. The experiments also showed that treating osteocytes with irisin increased their production of sclerostin, a protein that triggers bone remodeling, and injecting irisin into mice raised their sclerostin levels. Sclerostin actually triggers the breakdown of bone, which might seem harmful rather than helpful. However, Spiegelman explains that “intermittent breakdown of bone seems to be interpreted as a signal to remodel and build bones.”

Mice whose ovaries have been removed, depriving their bodies of estrogen, normally develop bone loss, the hallmark of osteoporosis. In the new research, the scientists showed that mice lacking the gene for irisin were protected against bone loss when their ovaries were removed. “These results are incredibly striking,” said Rosen.

So how could manipulating irisin be used therapeutically? Some form of intermittent irisin treatment might work, Spiegelman suggested. “Proof of this concept exists already,” he said, “in that parathyroid hormone — despite being a bone breakdown factor — is used to treat osteoporosis. On the other hand, a neutralizing antibody or some other antagonist of the receptor-irisin binding might mimic the effects shown here by the genetic knock-out.”

Now that the receptor for irisin has been identified, Spiegelman said the next steps will be to optimize different versions of irisin and antibodies to irisin “so we can manipulate its effects in in vivo settings through protein therapeutics. We are examining effects in bone, fat, and in the nervous system as well.”

The research was supported by National Institutes of Health grants 4 R01DK54477-19 and DK61502, and the JPB Foundation.