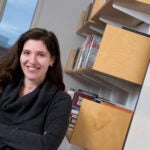 Honored for his role and accomplishments in soft robotics

The prestigious prizes, which are funded by the German Federal Ministry of Education and Research (BMFT), recognize extraordinary scientists with outstanding future potential.

As an electrical engineer and roboticist, Wood has made numerous critical contributions to the field of robotics, and specifically to the subfield of soft robotics that focuses on the design of robots using highly compliant materials. Inspired by the ways in which living organisms move and adapt to their surroundings, soft robots have the potential to be used in many real-world applications for which rigid robots are not suitable.

Wood and his team at Harvard’s Wyss Institute for Biologically Inspired Engineering and the Harvard John A. Paulson School of Engineering and Applied Sciences (SEAS) have worked out some of the basic engineering principles for the construction of soft robots at different scales and with different functionalities. These are key to creating soft robots with a much broader range of abilities in the future, including devices that can grasp and manipulate items with dexterity resembling that of the human hand, or that carry out a variety of tasks at different scales or in challenging natural and unstructured environments.

Wood is a founding core faculty member of the Wyss Institute and a leader of its Bioinspired Soft Robotics Initiative. He is also the Charles River Professor of Engineering and Applied Sciences at SEAS and a National Geographic Explorer.

With a highly multidisciplinary team, he has already developed soft robots that, for example, function as artificial muscles, able to grip and lift objects many times their own weight; small soft endoscopic devices for potential use in surgeries and industrial micromanipulation; and soft gripping devices for deep oceanic research that can be operated remotely to collect fragile specimens. His team increasingly integrates soft robots with new sensor technologies to make them responsive to different control or environmental stimuli, and actuator technologies that rival the remarkable abilities of muscle. To complement these efforts, Wood’s group has developed new fabrication approaches to monolithically integrate new functionalities into soft material architectures, often at scales well below other demonstrations of soft robots.

For the 2018 awards, Wood and his two fellow recipients were selected for their unusual ability and future potential to carry out innovative and high-risk research, and to develop new research areas in the natural and engineering sciences. As an additional criterion, the committees also considered researchers’ interest in a research residency or close collaborations with established research groups in Germany. Future awards will also go to researchers from the human sciences and life sciences.

“I am deeply honored to have been awarded the Max Planck-Humboldt Medal and I hope this will help to establish close collaborations with German robotics groups who have complementary research interests in the field of soft robotics,” said Wood.

“For example, we hope to work with the group of Professor Oliver Brock at the Technical University of Berlin, a leader in soft robotics and specifically in robotic manipulation using soft hands. Forming a collaboration could help us formalize device and algorithm designs that may enable soft robots with human-level dexterity across a range of objects.”