The machinery to drive ed reform 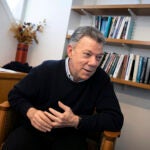 Paul Reville explains goals of conference that invites mayors, school officials, and community leaders to discuss how to make changes that boost students

Paul Reville knows that education reform must reach beyond the classroom to achieve its goals. For the Education Redesign Lab’s inaugural Leadership Institute symposium, to be held at the Harvard Graduate School of Education (GSE) Monday through Friday, the former Massachusetts Secretary of Education is bringing together mayors, school superintendents, and community leaders from 21 communities to discuss how to leverage government, nonprofits, and the private sector to battle key issues, such as income disparity, that can hold back students.

In advance of the conference, Reville, the Francis Keppel Professor of Practice of Educational Policy and Administration at GSE, discussed the educational needs involved.

GAZETTE: How did this initiative begin?

reville: I founded the Education Redesign Lab in 2014, shortly after I’d returned from a stint in state government. I had been really involved at that time, for about 25 or 30 years, in crafting systemic education reform for the Commonwealth of Massachusetts. And while I was very proud of our comparative achievement in Massachusetts, I was very dissatisfied that we had deep pockets of underachievement. And so I designed the lab to address that question, to begin to change the conversation on education reform to a much broader, holistic conversation about the lives of children, the impact of poverty on schools, and their capacity to educate young people.

GAZETTE: How did this symposium come about?

reville: We felt, at the time that we were building the lab, that we were at a particular moment in history where this holistic, 360-degree interagency collaborative approach to child development and education had an opportunity to become center stage. So we brought together Communities in Schools, Promise Neighborhoods, StriveTogether, Coalition for Community Schools, Say Yes to Education, and we sat down together, checking swords and shields at the door, and said, “OK, what is it that we can conceivably work on together to advance this field? Because our time has come.”

GAZETTE: How were the participants for the upcoming symposium chosen?

reville: We invited mayors who share this concept. In other words, these mayors had a baseline of belief that “My city can’t be successful unless my young people are successful. In order to get my young people to be successful, it’s going to take more than just a quality school system, and therefore I’m willing to invest some of my political capital.” Oakland, Calif., Louisville, Ky., Providence, R.I., and Salem and Somerville, Mass., [had previously worked] with By All Means. And we’ve just brought in the city of Chattanooga, Tenn. [Other communities will also attend.]

For example, children who have access to high-quality summer learning tend to surge ahead each fall in their studies, and those who don’t tend to fall behind. So looking at that, most people feel, well, summer ought to be a third semester, if you will, in the education of the child, not an optional accident of birth where if you’re lucky you get access to summer camp or summer school or travel or music lessons or recreation of various kinds. Rather, every child should be guaranteed at least six weeks of high-quality summer enrichment. So a mayor might — and, for example, the mayor of Providence has done this — focus on making more of those opportunities available to a higher percentage of young people, particularly disadvantaged young people in the community.

GAZETTE: You are also taking health and nutrition programs into account?

reville: If you have a chronic toothache that nobody’s taking care of because you can’t afford to go to the dentist, then there’s no chance you’re going to be able to concentrate. So those things need to be attended to. If we’re serious about preparing all of our young people for success, which we argue both from an ethical standpoint as well as from an economic standpoint is imperative, then you’re going to have to make sure that these things get attended to.

The number one challenge that I hear from superintendents these days is mental health problems that their students bring into school. This has nothing to do with the school itself, but it has to do with conditions of life outside of school. But unless there’s attention and support and mitigation to those challenges, they become impediments to student learning.