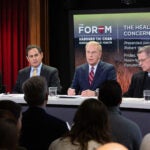 U.S. Supreme Court Associate Justice Sonia Sotomayor made an impassioned plea Tuesday afternoon for “serious thinking” among judges to find ways to come together more often, and to fight the effects of partisan polarization.

“For decades, the court has always managed to maintain the public’s respect, in large part because the public has perceived it as less partisan than other institutions,” Sotomayor said in a conversation with Andrew Crespo, assistant professor of law at Harvard Law School (HLS) before a room filled with law students.

“If we, as an institution, don’t find the way to find that middle, we stand a chance of going the way that our other branches of government have gone, and losing the respect that is at the core of our institution.”

Appointed by President Barack Obama in 2009, Sotomayor became the first justice of Hispanic descent and the third woman to serve on the court. A Yale Law School graduate, she is one of the four liberal justices in the nine-member court.

Sotomayor spoke to the students before she judged the final round of the Ames Moot Court Competition, held every year at the School to test students’ skills in appellate brief-writing and advocacy.

Some observers have called Sotomayor the “people’s justice” because of her efforts to leave her chambers to communicate with the public. She has spoken openly about her journey from the housing projects in the Bronx to the high court, and the rule of law, and her role as a justice.

With characteristic candor, Sotomayor spoke about the changes in the court since she took her seat a decade ago, and the efforts to keep a sense of collegiality among the justices. Three justices have since been appointed: Elena Kagan in 2010, Neil Gorsuch in 2017, and Brett Kavanaugh in October.

“My first seat was at the very end of the rectangular table in the conference room, opposite to the chief, and now I’m seating next to him,” said Sotomayor. “And every once in a while, I look at him and say, ‘I just didn’t expect this to happen so fast.’”

As new justices are appointed, the court changes the same way families change with the arrival of new children, said Sotomayor, and everybody has to adapt and learn to be a new family.

A crucial tradition that keeps the justices together is sharing lunch, during which they talk about everything but court business. That takes place every day, including the days when a majority opinion and dissents are announced. “Those are the hardest,” Sotomayor said. “But that simple tradition of eating lunch together has a great impact. You get to know about each other’s families, we learn about vacations, hardships, books they’re reading, movies they’ve watched. It humanizes us to each other.”

Asked for her opinion about the Senate confirmation hearings for Supreme Court nominees, which have become more contentious, Sotomayor said they have been “a bit more of a charade,” with something “unseemly” about them. She would prefer that senators meet with the nominees in private meetings without television cameras.

Sotomayor said she would also like to see nominees who have differing legal backgrounds, such as Civil Rights lawyers, public defenders, or criminal defense lawyers. She noted that the last Civil Rights lawyer appointed was Associate Justice Ruth Bader Ginsburg, named in 1993. Sotomayor is a former prosecutor.

“If we’re going to talk about such fundamental questions as criminal law, criminal procedures, Civil Rights law, and Civil Rights procedures, it’d be useful to have justices with some experiences in those areas to enrich the conversation and ensure that we’re capturing as many perspectives as possible,” she said.

Since Sotomayor published her best-selling 2013 memoir, “My Beloved World,” in which she shared stories of her personal life, from being raised by a single mother to experiencing poverty to growing up with juvenile diabetes, she has kept a high public profile. She has made appearances on book tours, at baseball games, on talk shows, and even on “Sesame Street.”

Most justices keep a lower profile, and when they take part in public events, they take the questions from their seats. On Tuesday, Sotomayor got out of her chair, descended from the stage, and walked among the audience, saying she wanted to say hello to everyone. She encouraged the students to ask more questions, saying, “Who is brave? I don’t bite.”

Tynan Jackson ’20 was one of two brave students who got to ask questions. When Jackson asked Sotomayor how she, as a  judge, finds the balance between voting along her beliefs on what is right and voting on the rule of law, Sotomayor had a strong response.

Sotomayor urged students to engage in civic participation to create better laws to build a more just society, and to focus on not only what is legal, but what is moral and fair.

“Too many of us live in a world where we accept being bystanders, that laws are happening to us, and that we can’t do anything about them,” she said.

“Laws are made by men and women, and men and women can change them when the laws are wrong. I can’t do this as a judge, but I spend most of my public time speaking to young people because I believe they are the ones I have to motivate to go out there to change the laws they don’t like. We’re here to make a more perfect union, and the only way we can do this is by engaging.”

For Marvellous Iheukwumere, J.D. ’21, the talk was inspiring. “It was very stimulating, as a woman of color, to hear Justice Sotomayor,” said Iheukwumere. “It motivates me to keep focusing on my goals in the legal field.”