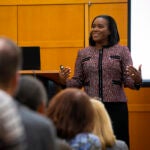 Bacow, Faust, colleagues laud Michael Smith, who has stepped down from his FAS deanship

At the beginning of last week’s faculty reception that celebrated Michael D. Smith’s deanship of the Faculty of Arts and Sciences (FAS), Harvard President Larry Bacow joked about the long line of presenters — “47 of them” — prepared to offer praise and appreciation for the former leader.

Though the group actually taking the podium would in fact number only six, their shared stories resonated deeply with an audience who responded with extended applause and heartfelt laughter.

Bacow led the program with an anecdote about first meeting Smith at an honorary-degree dinner at Annenberg Hall, where the former FAS dean complimented Bacow, then a member of the Harvard Corporation, on his cufflinks. When Bacow later gifted him his own set, Smith replied, “Thank you for very much, Larry, for helping to hold me together.”

“Now it’s my turn to say thank you for helping to hold us together for the past 11 years. It was always about the School, about your faculty, colleagues, and staff,” he said. “You are the essence of what a servant leader is about.”

Former Harvard President Drew Faust followed, noting that she felt nostalgic saying goodbye in the same room where she had introduced Smith as dean more than 11 years ago.

“How can it be this many years later and how come it’s not 100 years later?” she asked. “From the outset, Mike took on such an enormous sense of responsibility for making it right for FAS through the financial crisis and staying on top of all of those issues and making really tough decisions — unpopular decisions — but things he knew he had to do for the good of the institution.”

The accolades covered all aspects of his deanship, from his commitment to changing faculty culture related to teaching and diversity to his launch of House renewal.

Jim Waldo, the Gordon McKay Professor of the Practice of Computer Science, who for 11 years has co-taught with Smith, the John H. Finley Jr. Professor of Engineering, praised his colleague’s innovative teaching while dean. (Their students mapped campus surveillance cameras in one class). Mahzarin Banaji, the Richard Clarke Cabot Professor of Social Ethics and chair of the Department of Psychology, said Smith provided her “most meaningful” role at the University when he appointed her senior adviser to the dean nine years ago.

“He was committed to every discipline and its unique history. He cared to get it right, and so he asked hard questions and he asked to be persuaded,” she said.

Henry Louis “Skip” Gates Jr. brought equal parts humor and admiration to his words for Smith. Joking about his earliest impressions, Gates recalled that he wasn’t sure the two spoke the same language (“budget cuts”). Even Smith’s commitment to daily 5 a.m. swims confounded Gates, who was at that time “turning over for the last three or four hours of sleep.”

“Damn, I thought, this is going to be a long deanship. This guy is a machine.”

But then Gates turned serious, calling Smith’s support of the 2014 opening of the Cooper Gallery and his effort to promote and recruit faculty of color “unparalleled” and “extraordinarily productive.” He ticked off a partial list that included Glenda Carpio, Danielle Allen, Teju Cole, Sarah Lewis, Isaiah Andrews, Braxton Shelley, and Tiya Miles, and ended by revising engineer James Kip Finch’s quote: “The engineer has been, and is, a maker of history.”

“Engineers do make history,” said Gates, “but I’ll add, in some instances, they do make culture.”

Claudine Gay, Edgerley Family Dean of the FAS, closed with a gift for the honoree. The Mark Steele painting featuring all 20 FAS deans showed Smith standing in his dean’s office with House renewal shovels and his dog, Cosmo, by his side. Gay thanked him for being a challenging, supportive, and inspiring boss.

“Mike really sought out diverse perspectives, embraced them, really, and knew how to make every member of his team feel valued, and I know I’m not alone in feeling that way,” she said. “You’re part of a long line of distinguished deans, but I hope you never forget that you were a one-of-a-kind boss.” 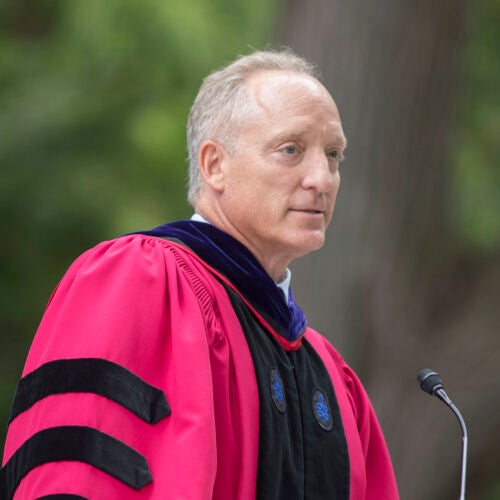 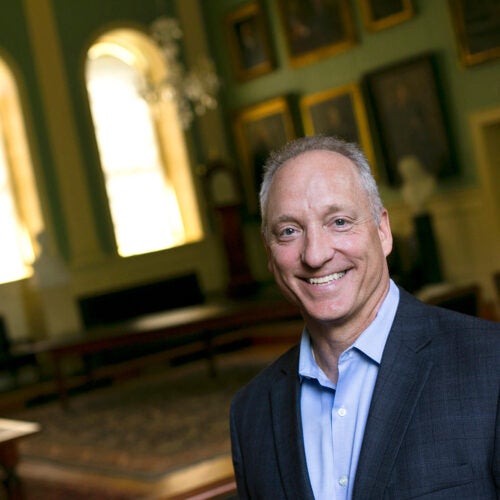 Mike Smith recalls his road traveled, and outlines path ahead