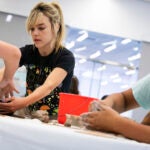 A season for exploration

“Mike made faculty who invest in teaching believe that they were being recognized for it,” said Banaji. “The value of teaching in the tenure decision is more deeply established because he prioritized it.”

Dedicated to strengthening a world-class faculty, Smith, who steps down this month as dean, invested in the Faculty of Arts and Sciences (FAS) with attention and resources, and a vision for innovative classrooms that welcomes interdepartmental teaching as well as artists and writers from outside academia. From 2007 to 2018, the FAS grew from 709 to 738 ladder faculty.

“We’ve hired truly extraordinary scholars, and our offers have been roughly at parity or 50/50 (men and women) over the last five years,” said Nina Zipser, FAS Dean for Faculty Affairs. “Not only are these people incredible researchers, but Mike has made sure we are hiring from the most diverse pools with the best search practices. He developed new practices and policies to support the tenure track. He also put in place a program to give research funds, especially in fields where it’s hard to get funding, or where there is there is need for seed or discretionary funding.”

In recent hires and promotions such as those of Lauren Kiyomi Williams (math), Philip Deloria (history), Robert Reid-Pharr (studies of women, gender, and sexuality), Matt Leibmann (anthropology), and Ju Yon Kim (English), Smith defined being a “modern dean in the true sense of the term,” said Banaji.

“Harvard, like any ancient institution, has had implicit (sometimes explicit) notions of what a Harvard professor must look like, sound like, act like. Mike let all those superficialities fall away, and brought a laser focus to the work. He understood the social pressures that lead us to favor irrelevant features — the packaging, if you will — over the hard facts of actual achievement,” she said. “He left behind older ways of thinking about social categories and who looked the part of a Harvard professor. In his thinking, there was no place for false indicators of talent. And because of this, he fostered a way of thinking on the Committee on Appointments and Promotions and elsewhere that prioritized the integrity of the process, from how we recruit and select to how we nurture and promote.”

Smith’s commitment to diversity is felt across FAS, but perhaps nowhere more acutely than at the John A. Paulson School of Engineering and Applied Sciences (SEAS), which came into existence shortly after he became dean.

“Mike’s been absolutely in lockstep with our shared priority of diversity in recruitment of faculty,” said SEAS Dean Francis J. Doyle III. “He’s been an enthusiastic partner in helping to create a more culturally rich community, not only in hiring and promoting women but in thinking of how we support them with mentoring and moderating demands of their time. When I was appointed, we didn’t have student organizations for the Society of Women Engineers, National Society of Black Engineers, or Society of Hispanic Professional Engineers on campus. I worked with Mike to find ways to get chapters installed to create affinity groups to retain a diverse student body. He was dedicated to that effort.”

In the division of arts and humanities, Smith focused on faculty innovation with support for arts lectureships and professors of the practice (PoP) in English and music. He also oversaw creation of a new interdisciplinary concentration in Theater, Dance & Media (TDM).

“At times, the humanities have been organized too much into separate silos. Mike really encouraged us to get better at working together,” said Martin Puchner, chair of TDM. “In TDM, as a new concentration, this was relatively easy to do, since we were drawing our faculty from all over the University. We had to collaborate to survive, but we also did it because we believed in Mike’s vision of working across departments, of sharing resources, and working together.”

“Students have direct contact with these artists,” said music chair Suzannah Clark. “As a scholar who used to perform, it’s given me a whole new life. It’s also a statement that the University has long wanted to make: We are a liberal arts institution, and the arts are a real part of the liberal arts.”

Dean of Arts and Humanities Robin Kelsey said, “Finding new ways to attract artists who can excel both here and out in the world gives students better ways to imagine and pursue their own creative lives.”

“Harvard has long struggled with the fact that Cambridge is off the beaten path for artists. It’s not New York or Los Angeles or London or Berlin,” Kelsey said. “These part-time PoP positions have made it a destination for world-class artists.”

In thinking about the lifecycle of FAS faculty, from hiring to retirement and the milestones in between, officials said Smith created an atmosphere that encouraged experimentation and openness, and that valued ingenuity. He ran pilot programs that, when successful, would be launched in full form.

“He has always pushed me on my thinking and my assumptions, and through these dialogues we always came to a better answer. He has high standards. He is never satisfied with the first answer you give him,” Zipser said. “He is also genuinely interested in people’s experiences and in what the quantitative data could tell us. He has a big heart. It wasn’t always obvious to people, but when faculty came with issues, he was very sympathetic.”

“Anybody who knows Mike Smith knows that he is a man of few words. What Mike does well is: act. He has started many sentences with ‘What do I know? You tell me,’” she said. “He has an abiding belief that faculty, if given the right physical and psychological environment, and left alone, do their best work.”