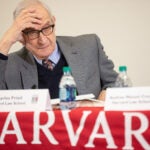 Study suggests the cultural practice was driven by economics, not sex and beauty

Depending on whom you ask, foot-binding was everything from a bizarre cultural fetish that placed male ideas of beauty ahead of women’s health and well-being to a brutal tradition intended to keep women subservient to men.

But a new study led by Melissa Brown, the managing editor of the Harvard Journal of Asiatic Studies, suggests that its real underpinnings may have been economic.

Based on interviews with thousands of elderly women who experienced foot-binding, the study suggests it was used as a way to keep girls — in some cases as young as 5 — on task producing handicrafts, such as spinning thread or weaving cloth, which could be sold to support their families. The study is described in a September paper published in PLOS ONE.

“One thing this paper shows is that foot-binding wasn’t an exotic custom about sex and beauty,” Brown said. “That’s important because it’s often used in high school and college text books as an example of the way in which ideas of sex and beauty can override economic interests. Well, this shows that’s not true.

“But the bigger story I’m interested in … is how families managed the labor and earnings of wives and daughters,” she continued. “The fact is that Chinese daughters contributed a whole lot more economically than they’ve ever been given credit for. They were feeding themselves and more than one family member in addition. In doing so, they contributed enormously to their households.”

Believed to have begun around the 10th century, the practice ended by the mid-20th century. A girl’s feet were usually bound when she was between 5 and 6 years old, when cloth strips —usually applied by either her mother or grandmother — were wrapped tightly around the foot.

Over time, the smaller toes, which were forced to fold under the foot, often broke, and in the most extreme cases, the arch of the foot was broken, resulting in a dramatically arched foot that in some cases could be as small as just 10 centimeters — only slightly larger than a standard credit card. If the arch was not broken, then the foot could eventually be unbound.

When they set out to document the practice, Brown and colleagues — just like many of the women who suffered through it — believed it was likely connected to marriage.

“Mothers bound their daughters’ feet because they thought it would help their daughters have a better marriage … which meant they’d be able to eat regularly.”
— Melissa Brown

“It was clear that the women we spoke with believed the purpose was marriage,” Brown said. “And I think that’s probably what their mothers believed as well. Mothers bound their daughters’ feet because they thought it would help their daughters have a better marriage … which meant they’d be able to eat regularly.”

The evidence, however, suggested otherwise.

“About two-thirds of the women we interviewed had ever had bound feet, and only about one-third were still bound at the time they were getting married, but 99 percent of them got married,” Brown said. “So they didn’t need bound feet to marry. Of the 28 counties we looked at in our 2012 paper, there was a correlation between foot-binding and marrying up economically in only two. For the vast majority of women, foot-binding didn’t make any difference — it didn’t mean they couldn’t marry and it didn’t mean they married better, but that’s what they believed.”

So why did families keep binding their daughters’ feet? And why did the practice persist in some rural, inland areas for so long? Brown said that the current study suggests one of the central reasons was probably economic.

By the turn of the 20th century, opinions on foot-binding had begun to change, with many Chinese and Western reformers pointing to the practice as a symbol of China’s backwardness or arguing that it undermined the nation’s economic strength.

The custom ended 100 years ago in China’s coastal and urban regions, and people have long assumed that its demise was due to reform-minded efforts. But the current study raises questions about that assumption.

“Foot-binding ended in China’s urban and coastal areas at the same time that textile mills were being built in these areas, and thread and cloth were being produced industrially,” she said. “So it’s not clear whether urban Chinese stopped binding because people were telling them they shouldn’t do it, or because machine-spun thread and cloth were underselling hand-produced goods, and girls had to stop making home-based handicrafts and find a different way of contributing to the household income. For women who wound up doing heavy labor — either agricultural or factory work — where they were going to be standing for long periods of time, foot-binding was problematic. It’s not that they couldn’t do it. Most foot-bound women we interviewed did some agricultural labor, but it was more painful.”

In rural areas, however, the economics were reversed, and the practice persisted for decades, continuing even into the 1950s in a few isolated areas.

“The areas where we were interviewing women were inland, rural areas,” Brown said. “One of the sites I visited had been two days’ walk from the nearest textile mill during the 1930s, and it was toward the mountains, so there wasn’t any kind of railroad that went there.

“That meant machine-produced cloth and thread had to be carried in on someone’s back, on a shoulder pole,” she continued. “That made machine-produced cloth more expensive than hand-spun, so in those rural areas it was still economically viable for people to have their daughters spinning thread or weaving cloth.”

Girls producing handicrafts for sale or exchange were more likely to have been foot-bound than girls who were not. “In the current study, we looked at cotton spinners more closely. We found that Chinese girls, working in their homes for commercial sale or exchange, spun more cotton than Chinese girls spinning only for domestic use (within the household). We also compared the Chinese spinners with African-American girls and women enslaved at Thomas Jefferson’s plantations, using similar technology. In some counties, foot-bound Chinese commercial spinners spun more cotton than the average amount spun by the enslaved Americans, who were pushed to produce as much as possible.”

What stopped foot-binding in rural areas, Brown suggested, wasn’t social pressure, but the construction of a road or railroad that brought cheap, machine-produced goods, which could be sold for less than handmade items.

“That sounds crass, but you have to remember that most of the families we interviewed were people who had struggled to put enough food on the table,” Brown said. “If you look at agricultural societies, kids don’t usually produce enough to feed themselves until they’re in their teens. For hunter-gatherers, they don’t produce what they eat until they’re around 20.

“By comparison, the Chinese commercial handicraft producers we interviewed were probably feeding themselves by 8 years old. And many girls contributed much more. There was one woman I interviewed who would weave hemp into grain bags,” she continued. “Her uncle would walk them into Wuhan (a major city in central China), where he sold the bags for enough money to bring back about 100 pounds of rice. She was feeding her entire family.”

Chinese families held onto commercial spinners longer, waiting later to arrange marriages. The woman who made grain bags was married six years later than average. “These girls were putting food on the table. These contributions may have been the difference between the family eating meat once a month instead of three times a year.”

This research was supported with funding from the National Science Foundation, Stanford University, and the Radcliffe Institute for Advanced Study at Harvard University.