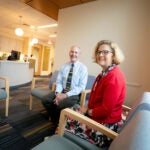 “No two games of chess are alike,” Jason Yoo ’21 muses. “It’s always different. I like to see it as drawing or painting with a stranger that you just met.”

Yoo was one of dozens of chess lovers who bonded and competed over the 14 new tables lining the plaza of the redesigned Richard A. and Susan F. Smith Campus Center in a recent weekend tournament.

Community Chess Weekend, organized by Harvard University’s Common Spaces Program in partnership with the Harvard Chess Club, featured open play, exhibition matches against a grandmaster, and a qualifier tournament, all building up to the Collins Cup Invitational Blitz Championship from which Harvard Chess Club’s own Varun Krishnan ’19 emerged victorious.

“It brings together people of all ages,” says Holger Droessler, Ph.D. ’15, from Germany. “If you play football, you can’t do that when you’re 80. Chess you can still play when you’re older, and you can start when you’re very young. … It’s ageless.”