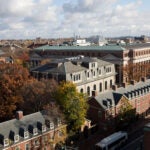 Patience and compassion: Even in an age of electronic media moving at breakneck speed, these old-fashioned virtues are essential to getting the story — and getting it right. That was the message conveyed by Ofeibea Quist-Arcton, NPR’s all-purpose Africa reporter, Thursday at the Radcliffe Institute for Advanced Study.

Delivering this year’s Rama S. Mehta Lecture, the Ghanaian journalist spoke about her in-depth efforts to amplify the voices of African women.

“African women, African girls — what they have to say is important, and we don’t hear enough of it,” she said.

As Quist-Arcton related the development of various stories to the audience, what came up repeatedly was her method, a mix of careful journalism and shared humanity that has elevated the Peabody and Edward R. Murrow-award winner’s work.

“We as reporters don’t dig deep enough,” she said. Finding interview subjects in the open-air markets of Dakar or Accra isn’t difficult, she said. What takes more work is uncovering the stories of those who aren’t always heard.

“You have to cut through the lines of eager young men who zoom in when they see a microphone,” said Quist-Arcton, who has also worked for the BBC and PRI’s “The World.”

“You have to push back the masses, part those clamoring to talk, to go to the back — and that’s where you’ll find the women.”

Quist-Arcton talked about the rewards of making the effort to capture the diverse viewpoints offered by local women, who may be caught up in cooking or commerce or childcare. “They have to work and they have families to provide for. They don’t have time to rush up to reporters, but they know what’s going on,” she said.

The effort may be as simple as spending a few hours in an area or exchanging small talk before an interview. In the field, she said, she often focuses on market women, even just to chat about clothes or jewelry. Meeting interview subjects for the first time, she’ll take a few moments to inquire after their families — to ask questions that don’t immediately relate to the assignment and to show empathy with their situations.

“It makes such a difference when you have met the person with whom you are talking,” she said. “Some of the examples that have stayed with me — I gravitate toward them because there are so many untold stories.”

As an example, she detailed her reporting on the Boko Haram kidnapping of 110 schoolgirls in the Nigerian town of Dapchi in February. A month later, 104 of the girls were released (five had died), and that development was the banner headline.

But Quist-Arcton found another story, that of the last girl, 15-year-old Leah Sharibu. One of the few Christian girls at the majority Muslim school, Leah had refused to renounce her religion and had not been released with her surviving classmates. Quist-Arcton was there and was able to get Leah’s mother to open up for an intimate and heart-rending story. They key, she said, was to “take the time to talk. You will make contacts that prove invaluable,” she said. Leah remains in captivity, and Quist-Arcton is still in touch with her parents.

“If you give people time to get to know you, even for a day, people get more comfortable and hopefully they can trust you,” she said. “We owe it to such people who are sharing such intimate, difficult details to give them such compassion.”