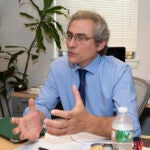 Panel discusses the rulings that took the most effort, biggest toll

It’s uncommon for judges to speak publicly about their hardest cases, the ones that tested their impartiality and independence and exerted an emotional toll.

In the new book “Tough Cases,” 13 trial judges from criminal, civil, probate, and family courts wrote candid and poignant firsthand accounts of the trials they can’t forget, giving readers a rare glimpse into their chambers. The book was the subject of a lively discussion at a panel sponsored by the Harvard Law School Library, which drew a packed house in the Wasserstein Center on Wednesday. The book’s stories help demystify the process by which judges make decisions, panelists said.

“I don’t think I had ever really heard judges speak or write publicly about their thought processes and their tough cases the way this book captures,” said Andrew Crespo ’05, J.D. ’08, an assistant professor of law at Harvard Law School (HLS) and one of the panelists.

“Something that comes through in a lot of the chapters is the emotional toll of the work, the challenge of having to deal with sadness and anger, and yet needing to present the face of justice, devoid of emotion,” he said.

Charles Fried, the Beneficial Professor of Law, said trial judges bear a heavy burden, not only because their work is lonely but because they have to steer their way through all facets of the human condition.

“A trial judge is dealing with real people; they are not abstractions,” said Fried. “They’re completely concrete. And the person whose life the judge is about to change one way or the other is looking right at the judge, and you’ve got to have the ability to look right at somebody and perhaps say, ‘You’re going to go to prison for the rest of your life.’ ”

For retired judge and HLS lecturer Nancy Gertner, “Tough Cases” reveals the challenges judges face and the need for the public to learn about them. The accounts show the judges as human beings talking frankly about the difficulties of the job, including the agony of deciding people’s fates and, in high-profile cases, enduring outside interference.

“Judges are being attacked, and the question is whether the best response to that is to continue to be above it all, or whether to give people a window into the difficulty of the job, as this book does,” said Gertner. “It’s a better way to enhance their legitimacy.”

Most of the stories deal with the rule of law and judicial independence, but stories of judges who presided over high-profile cases also offer a warning about political interference. The judges who ruled on Terri Schiavo’s “right-to-die,” Elian Gonzalez’s refugee status, and the perjury charges against former presidential adviser Lewis “Scooter” Libby highlighted how they resisted political forces trying to influence their decisions.

“Not too many people have to stand up to their president, their Congress, their legislature, and their church,” wrote Judge George Greer, who ruled that Michael Schiavo had the right to disconnect his wife’s feeding tube after a heart attack left her in a vegetative state. The decision ignited the wrath of conservative forces across the nation. “And I would have never known for sure if I had the strength to do that if not for that case. I walked out with my head held high,” Greer wrote.

District of Columbia Superior Court Judge Frederick Weisberg, one of the book’s editors, joined HLS professors on the panel. The book was born from informal conversations among Weisberg and Judges Russell Canan and Gregory Mize, who serve on the same court.

Weisberg, who also teaches annually in the Law School’s Trial Advocacy Workshop, said the cases that attract national attention are problematic, but would pose greater threats in countries with less-independent judiciaries.

“The beauty of our system of justice is that once you figure out what the right decision is, it’s not that hard because there is no other decision one can make,” he said. “That’s true because we’re here. In Kosovo, China, and many other places, it’d be less true in terms of resisting the pressure from outside.”

But even when the decisions are just, they can leave scars. A New York judge still grieves for an autistic child she met while presiding over housing court, where the child’s father was fighting eviction. Sensing something wrong, the judge ordered an evaluation from Adult Protective Services and a home inspection from Children’s Services to make sure that the boy was safe, and  the reports came back that he was. But years later, she learned that the father had slashed his son’s throat and “left him in the bathtub to die.”

“We, judges, do our best to ensure that justice is done,” wrote Lizbeth Gonzales, an associate justice on the New York State Supreme Court Appellate Term. “Rest assured that, like litigants and lawyers, we too suffer when things go wrong.”