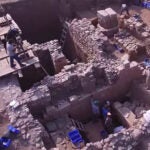 The cases are harrowing, and they keep accumulating. El Salvadoran women and girls who give birth to stillborn babies are originally charged with abortion, and then ultimately sentenced to decades in prison for “aggravated homicide.” To date, Jocelyn Viterna, a Weatherhead Center faculty associate and professor of sociology at Harvard, has collected 51 such cases. Most are destitute young women who live far from medical care — women who didn’t even know they were pregnant, many the victims of rape. Another 20 cases involve young women incarcerated and charged with “abortion.”

Viterna learned about the first cases in the mid-2000s when she was doing research for her book about female guerilla fighters, “Women in War: The Micro-processes of Mobilization in El Salvador,” and she said she couldn’t turn away. When she looked closely at the evidence presented in each case, it was clear that gender bias was rampant in the judicial process: women were accused of murder without any forensic evidence suggesting violence to the fetus; girls who didn’t even know they were pregnant were accused of attempted murder for accidentally birthing their babies in their home latrine. Why, she wondered, was there automatic presumption of guilt when there was no evidence of violence?

Consulting with doctors, psychologists, pathologists, and forensic examiners, Viterna educated herself about the science of abortion, miscarriages, and stillbirths. She then started submitting briefs to the court — including statements from medical professionals — about what was known in the medical literature. Could a young woman, in fact, not know that she was pregnant? As it turned out, yes, a traumatized woman can suffer from a dissociative disorder that psychologically disconnects her from her body. Can a woman first learn of her pregnancy by giving birth in the latrine? Again, the medical literature supports this. Could an umbilical cord break on its own from a fetus’s fall into a latrine? Yes, according to medical experts. All of this she aggregated and reported in a series of amicus curiae, or “friend of the court,” briefs.

“I’m not an activist. I do have my personal views, but I try strongly to keep them separated from these cases and really focus on the science and what we can know versus what is assumed based on implicit gender bias,” said Viterna. To date, she has submitted briefs for five cases.

With high rates of murder and domestic violence, El Salvador is already known as one of the most dangerous Latin American countries for women. But its severe anti-abortion laws have become a point of national pride — a defining identity for this Catholic majority country about the size of Massachusetts. While abortion has long been illegal in El Salvador, and throughout Latin America, in the past the laws were almost never enforced, and certainly not to point of incarceration. This all changed in El Salvador in 1997 with the establishment of new laws that repealed all existing exceptions to abortion — those for rape, threat to the mother’s health, and fetal deformities incompatible with life.

After the new law took effect, women began to be arrested on suspicion of abortion and aggravated murder regardless of whether the baby survived, or the mothers had been raped, or their own lives were threatened by the pregnancy. Once convicted, they faced long prison sentences: two to eight years for abortion, and 25 to 50 for aggravated homicide.

“Not only did they take out the exceptions, they increased the penalty for abortion. They also made a new crime that people commonly refer to as ‘accomplice’ for an abortion. Doctors were specifically told if you do not report a suspected abortion you could go to jail as well,” said Viterna.

A few years later, the Legislative Assembly passed a constitutional amendment saying life should be protected from the moment of conception. It was a tremendous victory for the Catholic Church and the international pro-life movement. Only one other country in Latin America, the Dominican Republic, has a similar amendment.

Viterna studied 25 years’ worth of newspaper articles to better understand the shift in public sentiment that resulted in widespread support for criminalization.

“In 1990, you see a newspaper article about a woman who was very pregnant who went to the latrine and accidentally birthed her baby there,” she said. “They got the baby out, it was alive and healthy and everybody celebrated. It was a positive human interest story. Eleven years later, a woman in a similar situation was arrested and thrown into jail for an abortion charge that later escalated to ‘attempted aggravated homicide.’ The judge based the guilty verdict exclusively on testimony from a neighbor who said she thought the woman tried to throw away her baby. The woman finally got out of jail after serving her full 12½-year sentence.”

Today that baby is 16 years old and perfectly healthy.

As a sociologist, Viterna wanted to understand the cultural and transnational forces behind such an extreme, institutionalized response. What gave rise to such a dramatic reversal of rights? (Today, for example, in El Salvador, a woman whose life is threatened by fetal deformities is required to stay in the hospital until she gives birth and cannot get needed medical intervention even when her life is on the line.)

To find out, Viterna conducted dozens of interviews with activists on both sides of the issue, as well as doctors, legislators, and law enforcement figures.

She said she believes the political climate in El Salvador changed after the 1994 UN International Conference on Population and Development in Cairo, which called for, among other goals, global education, family planning (i.e., birth control), and improvements in reproductive health. The Vatican feared that the message advocated population control, and responded by lauding countries that had abortion bans, singling out and praising El Salvador for its tough laws.

“They had some powerful language at the time,” said Viterna. “They talked about how this was the first world’s attempt to have fewer brown babies so that we didn’t have so much immigration to the rich countries, and so on.”

Viterna said her scholarship in the area of social change led her to a key insight: All social movements need a target. She argued that in El Salvador, when the right wing won its total abortion ban and constitutional amendment, it no longer had a focal point.

The new target became the poor, marginalized women, she said: “This is when you start to see newspaper articles appear about women accused of abortion, described as ‘horrible’ or ‘perverse’ mothers.” In a country with a strong norm of maternalism, the rhetoric played well, fomenting public antipathy against so-called “evil mothers.”

Viterna called what happened in El Salvador is a perfect case study of “moral panic.” A term first coined by sociologist Stanley Cohen in 1972, Viterna described moral panic as “a kind of collective hysteria that can erupt, especially when societies undergo a period of upheaval that threatens to transform traditional power relations. Moral panics work to reimpose a traditional social order by targeting as ‘villains’ or ‘folk devils’ the very marginalized group that appears to be gaining power in the transitional moment.”

Perhaps most fascinating to Viterna are the transnational forces underlying this major political and social shift.

“There is an incredible system behind the pro-life movement; they are highly organized and they work at many levels of society, such as college campuses, and their recruitment techniques are shared internationally,” she said.

Viterna believes that bringing objective medical information to the court will help prosecutors become aware of bias in the system. She counts seven women to date who have been released from jail or had their sentences commuted, and an eighth who was just awarded an appeal. The recently freed women advocate on behalf of those still in prison.

On the other side of her research, she interviews as many pro-life activists as she can.

“I respect them, because they believe they are fighting for the rights of babies and they are very consistent in what they believe,” Viterna said. “But I think they could be more open to seeing what’s really going on in the courts, and in these girls’ lives.”

This article was edited for length. To read the full article.