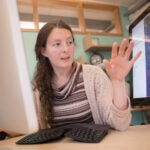 A measure of success for groundwater storage

Electrons are almost unimaginably small, but their tiny size doesn’t mean they can’t be used to poke holes in theories of how the universe works.

Working in a basement lab at Harvard, a group of researchers led by John Doyle, the Henry B. Silsbee Professor of Physics, has been part of a team to make the most precise measurement ever of the shape of the field around an electron, and the results suggest that some theories for what lies beyond the standard model of physics need to return to the drawing board. The study is described in a recently published paper in the journal Nature.

“This measurement is an order of magnitude better than the last best measurement, which we had also made,” Doyle said. “What this means is these theories of what is beyond the standard model, they may have to be revised.”

The findings are the latest to emerge from the Advanced Cold Molecule Electron Electric Dipole Moment (ACME) Search, a decade-long project hunting for evidence of exotic particles that fall outside of the standard model. A description of how the basic building blocks of matter interact with a handful of fundamental forces, the standard model is the key theory of particle physics, Doyle said, but it’s also incomplete.

“There are at least two fundamental observations we can make that are not explained by the standard model,” Doyle said. “One is the matter-antimatter asymmetry in the universe. The universe started off as a very small, hot place, where matter and antimatter were balanced. But as the universe expanded and cooled, at some point matter was favored, and that’s the normal stuff we see now in the universe — stars, the earth, the sky, etc. There is a general theory about how that took place, and that theory requires a property called ‘time reversal violation’ (which states that microscopic physics can tell which way time is flowing) … but the standard model does not have enough.”

“Dark matter is also not explained by the standard model,” he continued. “We can see dark matter based on how the direction of light is changed as it passes through galaxies. And based on the rotation frequencies of galaxy discs, we know there must be some other matter there, but we don’t know what it is.”

While scientists have advanced a number of theories that would address the gaps in the standard model, Doyle said, it remains unclear which — if any — may be supported by the scientific evidence.

“There are fairly generic theories that predict new particles, and with them predict enough ‘time reversal violation’ to describe the matter-antimatter asymmetry,” Doyle said. “In addition, some of these predicted particles are thought of as dark matter candidates.” Though massive facilities like the Large Hadron Collider are taking part in the search for those particles, Doyle and colleagues have been leaders in that hunt, and are doing it using a device that is the size of a large office.

What the ACME team is searching for, Doyle said, is something called the “electron dipole moment,” a telltale sign that the field surrounding the electron is spontaneously transforming into new, predicted particles.

“The electron is just a point particle, but the electrical field around it contains energy … which can spontaneously turn into a particle for a short time, including these beyond-the-standard-model particles,” Doyle said. “So there is a dance that goes on constantly, where the field is being converted into a particle, which decays back into the field.

“The trick is observing the effect of the process,” he said. “We refer to these particles as being ‘virtually created’ particles, and the theory is that because of them, the electron will actually look somewhat like a molecule, with a small positive charge on one end and a negative charge on the other.”

The result is an electron with a field that is not perfectly spherical, but slightly squashed. It’s that slight deformation that Doyle and colleagues were trying to find.

The device they used to do so works by firing a beam of cold thorium-oxide molecules into a relatively small chamber, where lasers select specific quantum states, orienting the molecules and their electrons as they pass between two charged glass plates inside a carefully controlled magnetic field.

Another set of “readout” lasers targets the molecules as they emerge from the chamber, causing them to emit light. By monitoring that light, the team can identify whether the electrons twist or tumble during flight, as they would if the shape of their field was squashed. “We didn’t see any electron dipole moment, which means these new particles would have to have different properties than were predicted,” Doyle said. “What this says is that these beyond-the-standard-model theories may have to be revised.”

The finding doesn’t, however, close the door on theories of what lies beyond the standard model, Doyle said.

“There were reasons to think there were particles at this mass at this energy scale, but we are not finding them,” he said. “Some of those theories look very unlikely to be correct. But there is room for some other very reasonable theories that predict particles just above where we are now, so it’s definitely worthwhile to keep pushing.”

Going forward, Doyle and colleagues may not be alone in that effort.

“This field is growing,” he said. “Most of the people who did the ACME experiments were students and postdoctoral fellows, who, together, deserve most of the credit. They have now become the next generation of scientists in the field and have, along with scientists from other labs, come up with exciting new ideas on how to do these measurements even better … So we expect this to be a very vibrant area for at least the next 10 years as people use new quantum tools to make these types of measurements. The big physics mysteries of the universe remain, and this community aims to keep trying to figure them out in our basement labs.”