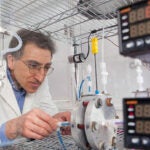 Precise computations of their shape support Standard Model of physics

Though it was hailed as a triumph for the “Standard Model” of physics, the reigning explanation of fundamental forces and particles, physicists were quick to emphasize that last year’s discovery of the Higgs boson still left gaps in understanding the universe.

But in making the most precise measurements ever of the shape of electrons, a team of Harvard and Yale scientists, led by Harvard’s Gerald Gabrielse, the George Vasmer Leverett Professor of Physics, John Doyle, professor of physics, and their Yale colleague David DeMille, has raised serious doubts about several popular theories of what lies beyond the Higgs boson. Their study is described in a December paper published in Science Express.

“We are trying to look for the effect of new particles beyond what is within the Standard Model, which we know is an incomplete theory of nature, similar to what is being attempted at the LHC,” the Large Hadron Collider, Doyle said.

“It is unusual and satisfying that the exquisite precision achieved by our small team in its university lab probes the most fundamental building block of our universe at a sensitivity that complements what is being achieved by thousands at the world’s largest accelerator,” Gabrielse said. “Given that the Standard Model is not able to explain how a universe of matter could come from a big bang that created essentially equal amounts of matter and antimatter, the Standard Model cannot be the final word.”

To hunt for particles that might fall outside the Standard Model, the research team precisely measures how such particles affect the shape of electrons.

Under the Standard Model, scientists have thought electrons to be almost perfectly round, but most new theories of what lies beyond that model predict that electrons have much larger — though still extraordinarily tiny — departures from perfect roundness.

Known as the ACME team, the Harvard and Yale researchers recorded the most sensitive measurements to date of electron deformation. Their results demonstrate that the particle’s departure from spherical perfection, if it exists at all, must be smaller than predicted in many theories that include new particles. This includes many variants of the theories known as supersymmetry.

Supersymmetry posits new types of particles that augment those in the Standard Model. It may help to account, for example, for dark matter, a mysterious substance estimated to make up most of the universe. It may also help to explain why the Higgs particle’s mass turns out to have the value seen at the Large Hadron Collider. These and many other facts about the universe cannot be explained by the Standard Model.

“It is amazing that some of these predicted supersymmetric particles would squeeze the electron into a kind of egg shape,” Doyle said. “Our experiment is telling us that this just doesn’t happen at our level of sensitivity.”

To test for electron deformation, the ACME team looks for a particular deformation in the electron’s shape known as an electric dipole moment.

“You can picture the dipole moment as what would happen if you took a perfect sphere, then shaved a thin layer off one hemisphere and laid it on top of the other side,” DeMille said. “The thicker the layer, the larger the dipole moment.”

Team members measured an electric dipole moment using electrons inside the polar molecule thorium monoxide, which amplifies the deformation.  They also diminished the possibility of spurious effects that might hint at the deformation of an electron when none exists.

Importantly, the tests were more than 10 times more sensitive than any previous search for the effect. This improvement was made possible by a new source of molecules invented at Harvard, by the selection of a special molecule, and by development of several experimental methods.

To get a feel for the precision, DeMille said, “Imagine an electron blown up to the size of the earth.  Our experiment would have been able to see a layer 10,000 times thinner than a human hair, moved from the southern to the northern hemisphere.”

Though the ACME researchers did not see evidence for new particles yet, the result greatly constrains the understanding of particle physics. And they will continue the search.

“We are optimistic that we can probe 10 times more deeply in the next several years,” said Gabrielse.  “If so, the ACME experiment will remain a strong contender in the race to find the first particles that lie beyond the Higgs boson.”