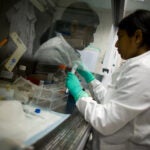 Lexi Smith ’18 is this year’s Harvard Presidential City of Boston Fellow, marking the third fellowship since the program debuted in 2016.

Smith, from Atlanta, is an environmental science and public policy major at Harvard. She said she always knew that she wanted to be involved in environmental issues.

“My dad is a veterinarian, and when I was growing up we raised a lot of wildlife, many of which had been affected by human interventions in the environment. I think that made me care about how much humans can — and do — affect our environment, and what the consequences of that can be,” said Smith, who works Boston City Hall.

Smith said she first became interested in the Presidential Fellow program after learning about the opportunity through Harvard’s Public Service Recruiting Day, held on campus every fall.

Smith said she wanted to serve at the city level because that’s where she sees tangible action.

“There’s not much going on at the federal level on environmental issues right now,” she said. “I think a lot of environmentally minded people are choosing to work at the municipal level, and that cities are stepping up to maintain climate leadership in the U.S. Boston signed on to the Paris Climate agreement, and a lot of other cities have, too. We’re working together to stay committed to the ideals we previously affirmed as a country.”

The Harvard Presidential City of Boston Fellowship program continues to encourage Harvard students to make a difference through public service. It also creates a pipeline to civic-oriented career-development opportunities in hopes that more recent graduates will gain a deep understanding and passion for public service, and will continue to serve in similar capacities throughout their careers.

Smith works on various projects at City Hall, and is part of the group writing the city’s Climate Action Plan Update, which implements the mayor’s goal of citywide carbon neutrality by 2050. She’s also helping with municipal aggregation — a means by which the city negotiates with third-party suppliers to give Boston residents more access to renewable energy.

She’s part of a team working on the Family Led Stability Pilot, which aims to house homeless Boston Public School families and provide them with integrated public services. She’s also working with the the Boston Advisory Council on Ending Homelessness, through which currently or formerly homeless individuals advise the city on issues such as shelter policy.

Smith, who will serve in the position through next summer, says one of the thing she likes most about it is its flexibility. “I came in with a certain set of interests,” she said, “but I think no matter what your background is, you could find city projects that would be of interest to you.”

Harvard and the city of Boston recently agreed that the pilot program, now in its third year, will be extended for an additional three years.

“I am thrilled that the fellowship will continue for an additional three years, and I am confident that Lexi and her successors will contribute to our city, our community, and our society in meaningful ways,” said Bacow. “Harvard students and alumni are eager to put their knowledge to work, and helping them advance the public good is one of my priorities — and a worthy goal that can be shared by colleges and universities not just here in Massachusetts but across the country.”

“The Harvard Presidential City of Boston Fellows are important contributors to the work we do here in the city,” said Mayor Martin J. Walsh. “The city has benefited tremendously in the three years of the program, while the fellows gain experience shaping and informing important city programs and policies. I look forward to continuing this program in partnership with Harvard.”

Harvard has a long history of a robust commitment to public service. Smith credits, among other things, her work at the Phillips Brooks House for helping her land the fellowship.

“I was very involved with the Phillips Brooks House when I was at Harvard, and many of the programs that I participated in helped prepare me for this job. I led the Environmental Action Committee, which introduced me to the activist and nonprofit environmental communities in Boston and Cambridge,” she said.

“I also participated in the civics program, which gave me a great introduction to the city. I was teaching civics to fifth- and eighth-graders in Boston and Cambridge Public Schools so I got to know a lot of different neighborhoods that way — I think that community-based knowledge was instrumental as I was applying for the job.”

The program provides funding for a recent Harvard College graduate to spend one year working as the mayor of Boston’s public-service fellow. The full-time position reports directly to the mayor’s chief of staff and is responsible for managing and executing projects in various issue areas. The fellow also works closely with city officials, cabinet chiefs, and department heads to design a wide variety of policy initiatives, and engages city residents through a range of community-based efforts.