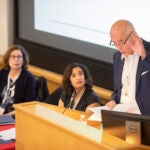 U.S. questioning of longtime ally may be leading to productive shifts, diplomats say

Two years ago, relations between the U.S. and Europe were on terra firma, just as they had been since the end of World War II. But after the seismic shift of the U.S. presidential election, that bond appears to be on thinning ice.

Nicholas Burns, the Roy and Barbara Goodman Family Professor of the Practice of Diplomacy and International Relations at Harvard Kennedy School (HKS) and a former U.S. ambassador to NATO and Greece, calls the situation “a crisis, because of what’s happened” since the start of the Trump administration. The changes include U.S. withdrawal from the Paris climate accord and the Iran nuclear deal, sanctioning of European companies that continue to do business with Iran, criticizing NATO, and questioning U.S. defense obligations to NATO members.

During a JFK Jr. Forum Monday evening, Burns, who also directs the new Project on Europe and the Transatlantic Relationship at HKS, asked European and American foreign policy experts whether the U.S. and Europe are experiencing a momentary rift or something far more serious.

“The fabric of our relationship … is much, much deeper and more resilient than just governments. Our people, our businesses, our cultures, our ideas, our values — they are completely integrated, and I don’t see any of that changing,” said Kurt Volker, a former U.S. ambassador to NATO during the George W. Bush and Obama administrations and currently the U.S. special representative for Ukraine negotiations, where he is working to resolve the ongoing territorial conflict with Russia.

Unlike past crises between the U.S. and European Union (EU), the debates happening in European countries around national identity, religion, populism, and other issues are shaking nations from the inside, not the outside, he said.

Still, there’s more common ground than may appear. Perhaps surprisingly, President Trump has helped create more consensus around policies in Europe — whether on increasing U.S. troop deployment in Europe, enacting tougher measures on Russia, or pushing back on the use of chemical weapons in Syria — than existed during the Obama administration.

“There’s a lot more convergence, and, in many cases even, people are happier with policies than where we were previously,” said Volker.

The rift may turn out to be a good thing for Europe.

“Let’s not waste a crisis like this,” said Wolfgang Ischinger, a former German ambassador to the U.S. and the Britain and now chairman of the respected Munich Security Conference. Europeans must recognize that the EU can no longer “outsource” its conventional security defense to the U.S. and must do more to bolster NATO, which is still “indispensable” to Europe’s nuclear defense.

“We need to do more for ourselves and try to make ourselves as Europeans a more respectable and more relevant partner for the U.S. That doesn’t mean break the relationship. On the contrary, I think we should try to engage, engage, engage, but by doing more, not by giving up,” he said.

Driving much of the tumult is the Trump administration’s sometimes up-is-down, black-is-white perspective and approach to foreign policy, one that veers from the careful language of diplomacy and respect for historical precedent toward a style that embraces provocation, surprise, and even chaos.

Trump’s “great powers” world view, one in which he tends to praise the strongmen leaders of Russia, China and North Korea while denigrating the EU as a mere trade “foe” and insulting its most powerful official, German Chancellor Angela Merkel, is radically different than those of recent U.S. presidents. His speech before the U.N. General Assembly last week touting “American sovereignty” was in line with Trump’s transactional attitude toward power and people.

“He’s a bilateral man in a multilateral world,” said Susan Glasser ’90, a staff writer for The New Yorker who has covered U.S. politics and foreign policy for Politico magazine, Foreign Policy, and The Washington Post for three decades. “And the consequences, we don’t know yet.”

Given some of the inconsistencies between Trump’s fiery rhetoric and his administration’s actions on the ground, it can be tempting to downplay the significance of his remarks and offbeat framing of issues. But that would be a grave error in judgment for anyone assessing U.S. policy, she said.

“If your whole analysis of the world right now is ‘Don’t pay attention to what the president of the U.S. says over and over and over again’ … that doesn’t end well,” said Glasser, who likens the current status to the dynamic that was at play in Russia a few years ago when Russian leader Vladimir Putin began taking a more authoritarian turn.

Despite considerable criticism of Trump for his stance toward Europe, Burns noted that many smaller countries are quietly pleased with his tough stance on trade with China. Volker praised Trump and his administration for its actions in response to Russia’s military intervention in Ukraine and annexation of Crimea, saying it had done more than the Obama administration did, such as stepping up sanctions against Russia, increasing military exercises on the eastern border of Ukraine, selling arms to Ukraine, and shutting down the Russian consulate in San Francisco.

“There’s no question President Trump has been courageous on Ukraine, he’s pursued the right policy, it’s a tough policy, and he deserves credit for it,” Burns countered. “On the sanctions, the president did not favor sanctions … he was pushed into it” by Congress.

But in the end, the basis of any good relationship is trust, and with Trump supporting some of the anti-democratic, nationalist, and populist forces that many Europeans see as the greatest threat to the EU now, much of the trust in the U.S. at an all-time low, said Ischinger. 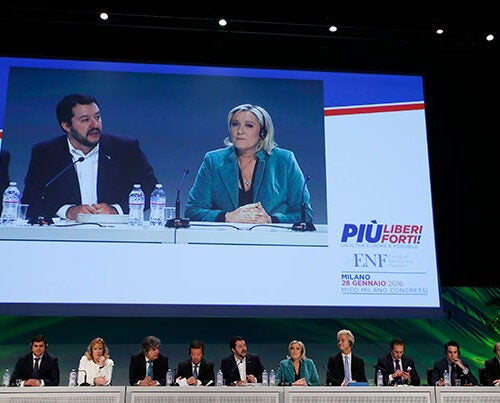 After the triumphs of Trump and Brexit, right-leaning parties see paths to political power

“There are probably more Germans today who think they can trust Putin than who believe they can trust Trump,” he said. So even if the U.S. wants to re-engage with Europe and work together again under a new president, it will be “much harder” to create parliamentary consensus in Europe because of what’s been said and done by the Trump administration. And that will deeply affect the U.S. ability to find willing partners and form strategic alliances.

Asked by a student whether the EU might turn to China as a future partner since the U.S. appears to be pulling back, Ischinger said that although Europe needs to work with China, he doesn’t see it being a close partner like the U.S. and the rest of Western Europe would be.

More importantly, he said the EU needs to develop a single “coherent European strategy” for dealing with China on global policy issues, like its activities in the South China Sea. Right now, there is a collection of individual national strategies, many of which emphasize commercial interests, he said.

If Europe is able to do that, he said the next challenge will be to establish the closest possible coordination with the U.S. to ensure that Europe’s interests are protected. The Chinese presence in Europe is such that China “could probably prevent a decision in the European Union” that went against China’s interests, said Ischinger.

“The leverage that China has been able to establish in certain European countries is already significant,” he said, so trying to create a partnership with the U.S. to manage the situation with China will be “an interesting, new challenge.”