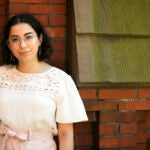 When her life is over, she’ll have lived

In the first week of her College life, Eva Ballew ’22, who grew up in a rural town of 3,000 in southern Wisconsin, promised herself always to stay grounded and to do everything she could to blaze a trail for others.

Ballew was admitted to 10 colleges, including Dartmouth, Princeton, Johns Hopkins, Georgetown, and Northwestern. To decide among them, the first-generation college student displayed a maturity and perspective beyond her years.

“When I was accepted to Harvard, I felt it was the first step to the rest of my life,” said Ballew, the daughter of a Native American man and a Hungarian-American woman. “I thought about all the doors that could open not just for me and for my family, but for the Potawatomi children.”

A descendant of the Pokagon Band of the Potawatomi tribe, Ballew feels strongly tied to her indigenous heritage. Among her dearest memories is attending pow-wows in southwestern Michigan, where the tribe of 5,000 has had its headquarters since it was federally recognized in 1994. On her cellphone she has an app to learn the Potawatomi language.

While Ballew credits her family and her high school academic adviser for supporting and inspiring her to do well in school, she recognizes that her path is uncommon given the high dropout rates among Native Americans. According to the U.S. Department of Education, only 67 percent of Native American students graduate from high school. “College is not an outlet for most Native Americans,” Ballew said. “Our high schools need to do a better job in helping native students think about college.”

“We’re seeing more Native American students applying to 12, 15 colleges, including top institutions, and that was never done before,” said Lowe. “The fact that Eva got admitted to 10 top colleges is remarkable and shows a shift in how families and students are thinking about college.

“There is a lot more information for Native American students, but also for high school counselors, tribal communities, and community members, who are being educated on how to encourage students to look at colleges,” she said.

Ballew hopes other Native American students follow in her footsteps and defy the statistics that show her peers lagging. Centuries of hardship and generational trauma have marked the lives of indigenous people in the U.S., and, “I don’t think our society recognizes that the trauma still continues,” she said. “Until it’s recognized, I don’t think we’ll be able to progress as a nation.”

Ballew’s family’s story is no exception to trauma. When Ballew’s grandmother was 4 years old, she was taken from her family and placed in a boarding school as part of the government’s attempt to assimilate indigenous children. At the federally run school, Ballew’s grandmother, who had been named Zada, was renamed Elizabeth. Years later, when Ballew’s older sister was born, her parents named her Zada to honor the matriarch.

“They suppressed the native side in my grandmother,” said Ballew. “My father never knew about his native heritage until he was 20 years old. There was a fear of being Native American, of feeling proud of your indigenous heritage.”

To some extent, times have changed. Over the past decade, there has been a revival of Native American culture and pride, which was galvanized by the 2016 protest movement to prevent the Dakota Oil Pipeline from being built on indigenous land. Tribes are pushing to reclaim and preserve their languages and to change the narrative that portrays them as victims, mired in poverty and despair.

“We have endured many hardships, generation after generation, and we’re still here, even though many people, including some of my high school mates, don’t believe we exist,” Ballew said. “We’re still here, fighting the good fight.”

In her high school in the town of Raymond, Ballew was the only Native American student, and many of her friends didn’t know about her background until she shared it with them. “People have a depiction of what a Native American person looks like,” she said. “When people saw me, they saw me as white.”

At Harvard, Ballew plans to concentrate on government or history, an interest sparked by a trip to Montenegro in high school. She hopes that her education will help her community, and Native Americans more broadly, find better educational opportunities.

“I want to help my community to get to a place where success is a possibility and education is a real opportunity,” said Ballew. “I want to be the same person that I am, but wiser and better prepared to take on the world and fix the injustices I see. I promise myself to never forget where I came from.”