Finding their place in the world 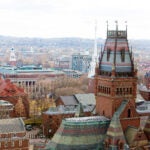 As part of Worldwide Week, students discuss how going abroad changed their lives

Before traveling to Russia over the summer, Sasha Shpitalnik ’19 feared that something might go wrong with her senior thesis research on nongovernmental organizations there, or with the trip in general. But it didn’t. After more than 100 interviews, lots of connections, and plenty of sightseeing in Moscow, St. Petersburg, and Novosibirsk, Shpitalnik realized the trip had enhanced her research and changed her outlook on life.

“I was scared, but I had to force myself to push through and explore the unknown,” said Shpitalnik, a government and Slavic languages and literatures concentrator. “I spent many hours in Gorky Park thinking about my place in Russia and in the world. All the things I learned about myself in Russia will stay with me forever. They have shaped the way I see myself in the world.”

Shpitalnik was one of 12 students who spoke Monday evening during Destination: World, which helped kick off Worldwide Week at Harvard 2018, a program that highlights the University’s global impact.

Students shared stories about the lasting imprint their trips abroad had on their career paths, their world views, and the way they see themselves, and they encouraged other students to get out of their comfort zones, explore the world, and find their passions during their time at Harvard.

For Ellie Underwood ’19, a neurobiology concentrator, trips to Japan allowed her to reconnect with her family roots — her mother is from there — to learn Japanese and to start a journey of self-discovery.

“I had the desire to reconnect more deeply with my heritage while at the same time figuring out what it meant to be both Japanese and American and finding my own place between these two countries,” said Underwood. “I know that my journey of discovering my own relationship to Japan will continue for the rest of my life.”

In other cases, students traveled to unfamiliar places. Maria Tirnovanu ’20, a social studies concentrator, went to South Korea without knowing the language, and fell in love with the culture.

“There are things out there for each and every one of us,” said Tirnovanu, who plans to return to Korea to do her senior thesis research on social and cultural changes in the country. “Many people say going abroad is going to change your life, and that’s what happened to me.”

In its second year, Worldwide Week features more than 50 events, including seminars and panel discussions, film screenings, exhibits and tours, and other programs from across all the disciplines that show the breadth of Harvard’s global engagement.

“Harvard is in the world, and meaning to be very much of the world,” said Margot Gill, University marshal and administrative dean for international affairs in the Faculty of Arts and Sciences, during her opening remarks. “Harvard’s interest in the world is about what we do globally, but it’s also about what happens here in Cambridge.”

Harvard’s international presence is represented both in the student body and the faculty. There are nearly 5,000 international students at Harvard, hailing from 200 countries. Harvard teaches nearly 100 languages. And 38 percent of the faculty is foreign-born.

The panel discussions cover topics from press freedom in Asia to gender and sexuality in Nigeria to Islam and race, from human rights and the post-1945 international order to environmental health in Latin America. The week will feature cultural performances as well as a healthy dose of entertainment at Thursday’s International Comedy Night with stand-up comic Hari Kondabolu and the Harvard College Stand-Up Comic Society.

The program is co-sponsored by the Office of the Vice Provost for International Affairs and several centers, institutes, and programs that foster research abroad. Among them are Harvard’s Asia Center, the Davis Center for Russian and Eurasian Studies, the David Rockefeller Center for Latin American Studies, the Fairbank Center for Chinese Studies, Harvard China Fund, the Korea Institute, the Lakshmi Mittal and Family South Asia Institute, the Program on U.S.-Japan Relations, the Reischauer Institute of Japanese Studies, and the Weatherhead Center for International Affairs.