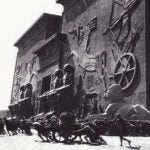 Accepting the inaugural Mahindra Award for Global Distinction in the Humanities, Nobel Prize-winning author J.M. Coetzee treated the audience filling Sanders Theatre on Wednesday to thoughts about his earliest reading and the concept of a mother tongue.

The ceremony, which included a panel discussion among 11 humanities scholars, opened with a performance of Bach by pianist Stephen Prutsman. Homi K. Bhabha, director of the Mahindra Humanities Center, then introduced the award, named after Anand G. Mahindra ’77 and his wife, Anuradha Mahindra, which “celebrates the work and vision of an internationally renowned public figure whose career has contributed significantly to the flourishing of the arts and humanities.”

Calling Coetzee a “foundational writer of the century,” Bhabha said, “What I have learned from Coetzee’s works … is that great classics glow with the slow fires of survival, their flint igniting again and again and again, rather than burning out in a showy blaze of genius.”

The award itself, designed (as was the color-washed logo of a jagged mountain range) by Sir Anish Kapoor, was presented by University President Larry Bacow. Referring to the award’s gold-toned peaks, Bacow thanked Coetzee “for seeking summits in your craft and for opening our eyes to vistas beyond our imaginations.”

Accepting the honor, the 78-year-old Coetzee began with a reference to his age: “You see a venerable gent nearing the end of his days.” But the two-time Booker Prize winner quickly transitioned to speaking about his “relations with the English language,” via his earliest reading.

The author related how, as a child in South Africa (he now lives in South Australia), he was given a copy of the “Children’s Encyclopedia,” a British book he cited as a formative influence. Even before he could read, he recalled, “I used to pore over the pictures and try to make sense of them, and by them make sense of the world.” Once he could understand the words, he would often reread the “green books” that made up the encyclopedia. Revisiting them as an adult, however, he found them somewhat less entertaining.

Published “shortly before the Great War” and revised shortly thereafter (Coetzee’s childhood edition was published in 1923), the book was very much a product of its time, he recalled, espousing British nationalism that promoted “unthinking obedience.”

“In particular, it was committed to the idea of patriotic sacrifice,” he said. With its teachings on race (defending the superiority of Anglo Saxons), sex (“simply absent”), and nationality, “it was not a good preparation for the late 20th century.”

Even as a child, Coetzee recalled, he felt a disconnect between the life he experienced and the one described in the green books he knew so well. “I could never quite associate myself with that world,” he said. That disconnect created a rupture with English itself.

“Only later did my commitment to the language begin to fade,” he explained. “As it faded, English began to look to me like just one language among many. Writing in English still came easily to me, but it did not come naturally. I no longer felt I had any duty to continue in it or sustain it.”

Returning again to the concept of a “mother tongue,” he asked, “Is ‘mother tongue’ just a locution, or are there people who feel enfolded in the language they hear as a child feels enfolded in a mother’s arms? Are there people who feel … motherless?” He said the question feels particularly relevant today, “an experience worth exploring in depth, or so it seems to me.”

Coetzee won the Nobel in literature in 2003.

The idea of a mother tongue was the first of several concepts picked up by the panel that followed his remarks.

While Golijov discussed learning English after hearing both Spanish and Yiddish at home, others spoke of unease with the language, stemming from their parents’ greater fluency in other languages, from French and Norwegian to Yiddish. Reacting to the honoree’s speech, Scarry noted that fluency is not always an answer. “If I have a mother language, it is English,” she said. “But I also recognize the feeling of not always feeling at home in it.”