A pioneering mind for the power of design 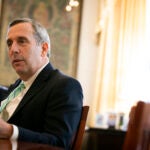 As a sophomore at Wellesley College, Adele Fleet Bacow was attracted to architecture and art. Soon, after enrolling in a course on urban sociology, she found a passion that combined her love for the arts with her desire to help enhance the vitality of neighborhoods and communities.

The only problem was that Bacow had to develop her own major, since the path she envisioned didn’t exist at her college. Fortunately, a cross-registration program had recently been established between Wellesley and the Massachusetts Institute of Technology. Creating a major in urban design, she was able to draw greedily from classes in the schools of architecture and urban planning at MIT.

The experience was not exactly new. Growing up as the fourth of five siblings in a close-knit family in Jacksonville, Fla., she was used to charting her own course.

“It was wonderful to be part of a large family,” said Bacow in an interview at Loeb House. “There is never someone doing things for you, for the most part. You learn to be fairly independent and forge your own way.”

Now, Bacow is looking forward to leaving her imprint at Harvard.

On a recent Monday morning, Bacow spoke with parents, helped carry boxes, and posed for photos as she and her husband, Harvard President Larry Bacow, welcomed first-years to campus. It was, in many ways, a continuation of the warm and personable style the Bacows demonstrated as first couple at Tufts, where they hosted senior dinners, served pancakes to students during reading period, and once performed a hip-hop dance with faculty that nearly brought down the house. In her new role, Bacow plans to stay connected to student life, but with limits.

“We have a lot of energy, but I’m not promising hip-hop,” she said, breaking into laughter.

A Wellesley College graduate with a master’s degree in city planning from MIT, Bacow feels fortunate to have built a career that combined her interests in community development and the arts, while also helping to raise two sons and supporting her husband’s pursuits as a scholar and higher ed leader.

At the helm of Community Partners Consultants, a firm she founded in 1996, Bacow’s work focused on urban planning, cultural economic development, and the arts. Throughout her career as a city planner and urban designer, Bacow has worked with cities and towns, state agencies, and community-based organizations focusing on economic and community development, design, and the arts. Her work in the public and private sectors led her to advocate for better public environments and to promote design that highlighted the revitalization of downtowns, urban spaces, and public facilities. Much of her work drew upon the symbiosis of arts and community development.

Design, said Bacow, is neither a “frill” nor merely “aesthetics.” It affects the lives of communities because it is closely tied to economic development. In 1995, she published “Designing the City: A Guide for Advocates and Public Officials” as a manual to inform efforts to improve “the way communities are planned, designed, and built.”

“People used to say, ‘Why should I worry about design when there are more important things, such as schools and education?’” noted Bacow. “When I wrote the book, many mayors said they wanted their cities to have a better design because it benefits their communities. It improves their living environment, which attracts workers, businesses, and increases property values and tax revenues.”

Bacow’s influence on urban design has left a mark, said Gary Hack, professor emeritus of urban planning at MIT, where he led the Department of Urban Studies and Planning. Bacow and Hack met at the school while she was taking a course in urban design and architecture.

“Adele was a pioneer in the field,” said Hack. “Back then, people thought economic development involved making industrial parks to attract companies to locate their offices or production factories. Not many people thought about the quality of design as an important tool to attract businesses to their communities. She made a career out of the intersection of design and economic development.”

As director of design and development at the Massachusetts Council on the Arts and Humanities, Bacow created a statewide program to advance the quality of design and planning. For her work with the council, she was awarded a Federal Design Achievement Award from the Presidential Design Awards program. She also served as deputy director of the Massachusetts Government Land Bank, responsible for the redevelopment of blighted properties and former military bases.

Anne Hawley, who as executive director of the Council on the Arts and Humanities hired Bacow, recalled the role Bacow played in helping government officials advance design in the public interest. Bacow worked with main streets and small towns that were struggling with runaway development. She also organized bridge design workshops for engineers at the Department of Public Works and brought in Swiss bridge designer Christian Menn to chair a bridge design competition. Menn would play an influential role in the design concept for the cable-stayed Zakim Bridge over the Charles River.

“Adele made people in government understand that design was an important part of everyday life,” said Hawley, who went on to direct the Isabella Stewart Gardner Museum from 1989 to 2015.

“The Zakim Bridge was a result of her work. She helped us understand that design could improve public places and public life. From rural Massachusetts to the bridges, she figured out a way to involve architectural designers in enhancing the
environment.”

To connect government officials to the ways design impacted their communities, Bacow commissioned Anne Mackin and Alex Krieger to write “A Design Primer for Cities and Towns,” which was distributed to planning, conservation, and historic preservation boards across the state.

“At that time, when the primer was published [in 1989], there was a growing concern about sprawling America and how it was becoming more suburban-focused at the expense of the quality of our towns and villages,” said Krieger, a professor in practice of urban design at the Harvard Graduate School of Design.

“Adele was determined, among others, to reinstigate a discussion about what makes good communities. She has been a great advocate for urban design and preservation and continuation of quality of life in our cities, small towns, and villages.”

Over the past two decades, as cities and downtown centers suffered blight and decay, Bacow began promoting the arts as a tool to spur economic and community development.

Some of Bacow’s favorite projects include strategic plans for Artists for Humanity’s EpiCenter in Boston, business plans for community development corporations working to create jobs for low-income people nationwide, a master plan and economic development strategy for the Worcester Arts District, and a plan for an arts and cultural district for downtown Beverly, Mass.

For Bacow, who grew up in a family that loved art, music, and culture, the role of arts is paramount to quality of life. Her father, a pediatrician, and her mother, a trained pianist and an active volunteer, would take their five children to local cultural events.

“I have art in my soul,” said Bacow, who plans to bring a baby grand piano to Elmwood, the Harvard president’s house.

Asked what she would have been had she not become an urban planner, Bacow said that she contemplated becoming a journalist or a high school art teacher, and that earlier in life she entertained the “fantasy” of being a ballet dancer. But becoming an urban planner was a perfect marriage of her love for the arts and her desire to help improve communities. It was a desire born in her teenage years when her work as a Head Start volunteer in Jacksonville took her across the railroad tracks on her bike and opened her eyes to segregation in her home city.

“I didn’t realize how important that experience was,” Bacow said. “But in college, while taking an urban sociology class, I went back to those memories and I became interested in issues such as inner cities, community, and economic development.”

As for her life at Harvard, Bacow said she relishes being surrounded by young learners and expects to maintain a healthy balance between her diverse interests and family life, which now includes Harvard students.

“I spent my whole adult life around college students,” Bacow said. “I think it’s the best age in the world. College students are so full of life and promise, optimism, and idealism. There is nothing better.”