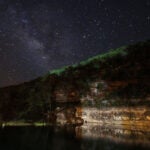 Writer, environmentalist reflects on lessons from being at the Divinity School

When author and environmental activist Terry Tempest Williams began the last academic year as writer in residence at Harvard Divinity School, she was prepared to be homesick. She had never been away from her native Utah for a whole year. But Williams found an intellectual home at the Divinity School, where she used her time to reflect on the ethics of climate change, the spiritual crisis over public lands in the West, and the ties between the environment and social-justice issues.

The Gazette sat down with Williams at her apartment on Francis Avenue, home of Center for the Study of World Religions, to talk about her activism, her craft, and the lessons recently learned. She will start her second year as writer in residence at the Divinity School in the fall.

GAZETTE: A year ago, you came to the Divinity School to reflect on the spiritual and ethical implications of climate change. What have you learned?

WILLIAMS: I have always believed that climate change is an ecological issue, but I believe first and foremost that it is a spiritual issue. If we do not recognize that this is our ethical challenge in the 21st century, then I think we will fail to respect and honor the future generations that would follow us.

GAZETTE: Why do you see climate change as a spiritual issue?

WILLIAMS: Because it has everything to do with an ethical stance toward life. It is a spiritual issue to extend our notion of power to include all species, not just our own. We’re very anthropocentric. We believe in the supremacy of our own species, that we live only for us. We don’t acknowledge other intelligences in the world, meaning animals, plants, rivers, birds, and everything that is alive.

GAZETTE: You have said that environmental issues are social-justice issues. Can you explain?

WILLIAMS: Right now, the environmental issue pressing on us is climate change. Fossil-fuel development in the American West is affecting our communities, especially regarding water quality.

It is happening in the most fragile of landscapes, and they also happen to be in public lands and sacred lands to the Navajo, to the Ute, Zuni, and Hopi nations. When President [Barack] Obama declared Bears Ears a national monument, he recognized that it wasn’t just a case of protecting wilderness but that it was a social-justice issue that was tied to the tribes as oppressed people. I see environmental issues as health issues, issues of social justice, especially for marginalized communities.

GAZETTE: I read that this is the first time you have been away from Utah for so long.

WILLIAMS: I had never been away from the American West for more than four months. When I first came here, I felt I was in exile because I had lost my job at the University of Utah because of political reasons. To have a year away from home, I had never done that. I’m physically, mentally, emotionally changed by it. I can see the American West more clearly because I am physically removed from my home ground, though I am still emotionally attached. Perhaps this is the definition of homesickness.

There is no dark sky of stars, no quiet here in Cambridge. My eyes keep bumping up against trees. I’m used to seeing the curvature of the Earth in an erosional landscape. On one hand, I feel the loss of my own home. On the other hand, I didn’t expect to find here an intellectual home that would hold me in other ways and give me courage of a different kind. I feel a wholeness I have not felt before. Maybe, I’m becoming a whole person by weaving the two worlds together. I feel liberated here.

GAZETTE: Liberated from what?

WILLIAMS: From trying to fit into a mold and having to find a language that doesn’t continually offend. I feel free here, I can say whatever I want to say, and no one cares. I love Utah, but growing up and working in Utah, I was always fighting against something, whether it was to find my own voice or to support the voices of others. Here I’ve seen the power of a caring community at the Divinity School, where people coming from different religious traditions work together to find a deeper meaning about what it means to be human.

GAZETTE: You said you see the West more clearly from Cambridge. How has your perception of the West changed?

WILLIAMS: I’ve lived in a pretty small bubble in Utah, which in many ways is dominated by the Mormon culture. We now in Utah are in a spiritual crisis over public lands. It’s been heightened over Bears Ears National Monument, which has created a tension between the community in rural Utah and the tribes. I see the American West in a civil war over land. There are those who want to exploit public lands and those who want to protect them. And with this administration, the tension has deepened in a place like Utah because of its conservative nature and religious supremacy, and the structural racism embedded in Mormon theology. At this moment, the tribes are driving the environmental conversation in Utah; the Navajo/Diné are legally recognized now as the majority in San Juan county, which is among the largest counties in the U.S., and the local people who are largely white and Mormon are not happy with that. For centuries, we have not acknowledged that the tribes are rooted here, and they’re saying, “We’re here, we’ve always been here.”

GAZETTE: Are you still a Mormon? What’s your relationship to the Mormon religion?

WILLIAMS: My background and my culture is Mormon, but I left the religion many years ago. I was not comfortable with the theology that [at the time] forbid African-Americans to hold the priesthood and that labeled Native people as cursed, as “Lamanites.” Nor was I comfortable with women not being allowed to hold the priesthood. It has been gender issues, race issues, the theology, and the politics of the patriarchy that have troubled me — even as I continue to honor my religious background that has given me a deep sense of community, family, and a people in place. You might say I was a radical born into a conservative religion, and it held me in place until it became too small.

“There is no dark sky of stars, no quiet here in Cambridge. My eyes keep bumping up against trees. I’m used to seeing the curvature of the Earth in an erosional landscape. On one hand, I feel the loss of my own home. On the other hand, I didn’t expect to find here an intellectual home that would hold me in other ways and give me courage of a different kind.”

GAZETTE: Let’s talk about your craft. You’re an environmental writer, you have written 18 books, and you have said that language and landscape are your inspirations. What does landscape say to you?

WILLIAMS: I write in the genre of creative nonfiction, but I’d like to think that there are elements of natural history, women’s issues, but also qualities inherent in fiction, poetry, and lyricism in my work. I view myself as a storyteller of place and of people in place. Landscape is bedrock; landscape shapes culture. I’m a woman who lives in the American West, and my perspective has been shaped by geography, gender, and culture. With a name like Tempest, there is a certain amount of anger that comes up in my writing when I see greed replacing generosity, when I see corporations shattering communities, when I see Native people’s rights being violated by my own people. I write out of love, a love of place, a love of people. For me, landscape, the ground beneath our feet, is what holds us upright.

GAZETTE: Besides being a writer, you’re known as an activist. You protested against nuclear testing in Nevada in the late 1980s and early 1990s. In 2016, you started an energy company, Tempest Exploration Company LLC, to buy leasing rights to federal public lands. Why?

WILLIAMS: I see myself as a storyteller, a translator, a disruptor, but more than anything I see myself as an engaged citizen. As citizens, we all have a voice. When my husband, Brooke Williams, and I heard that the Federal Bureau of Land Management was conducting an auction to sell leasing rights to oil and gas companies to drill for fossil fuels, we went there to protest. But we ended up buying leases, and we formed Tempest Exploration Company LLC. My father, who’s been in the oil and gas business laying pipes, is the CEO. We bought our leases to keep the oil and gas in the ground until science can prove they are worth more above ground than below, given the costs of climate change.

But our leases were revoked. We’ve appealed that decision. We’ll see how that goes, but what I can tell you is that through our Freedom of Information request, we found out that no one who has bought leases has ever been denied leases since the 1920 Mineral Leasing Act was created. Brooke and I are the first ones who have been denied leases. I would argue that it’s because we were publicly exposing and questioning the validity of leasing public lands for fossil fuels in this era of global warming, where 20 percent of America’s carbon emissions are coming from fossil-fuel development on public lands. If U.S. public lands were a country, they would rank fifth in the world for greenhouse gas emissions.

GAZETTE: You co-taught a course, “Apocalyptic Grief, Radical Joy.” What is your main takeaway from both the course and your year at the Divinity School?

WILLIAMS: I feel a deep affection for the Divinity School. I feel it’s where I belong, where I can ask in community the large questions that have to do with an ethics of place. In our class, we had 20 students. I love that in community we were able to grapple with what it means to live, love, and grieve in the epoch of the Anthropocene, where the press of humanity registers as a geological force on the planet.

Together, we explored uncertainty and uncovered practices of care, and learned to be open with our grief. We brought speakers such as Tim De Christopher, an environmental activist who served two years in prison for civil disobedience in Utah, and Jonah Yellowman, the spiritual adviser for Bears Ears, who is a Navajo medicine person. He had never been to the East Coast. He had told me that the first thing he wanted to do was greet the Atlantic Ocean as a gesture of respect because he is part of the Water Clan. We went to Revere Beach in a storm of pelting rain — not a soul around. He walked out to the waves and gave his offering of corn pollen from the desert.

It was a lesson for me on how we might approach the land and each other with respect and humility. He shared that story with the students. And for three hours, Jonah spoke in stories. He showed us that there is something deeper, wiser, and older than we are, and it’s called the Earth, and that it’s our responsibility to create a community of care and respect. This can the bedrock of radical joy.

This interview has been edited and condensed for clarity and length.