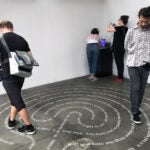 Former EPA administrator Gina McCarthy, now the director of the Harvard Chan School’s Center for Climate, Health, and the Global Environment (C-CHANGE), says that if we pull our eyes away from the federal government’s actions on the environment, we’ll see positive things happening in cities and states and among consumers.

We asked her about her vision for the center, her view of the current EPA, openings for environmental progress, and more.

GAZETTE: How are you settling in at the center? Will you be teaching or just focusing on getting C-CHANGE going?

McCARTHY: There’s so much going on. I taught during the fellowship that I had originally, but I’m not teaching again until next semester. I have to get the center up and functioning, get the new mission set, and get some funding opportunities. I’m excited about it.

GAZETTE: That excitement is one thing I wanted to talk to you about. It seems like in some corners there’s a woe-is-us attitude about the environment, but I don’t detect that from you. Why is that?

McCARTHY: First of all, I think it’s counterproductive. If I want to do nothing, that’s probably a really good strategy, but it’s never been my attitude.

I’ve seen ebbs and flows and I think that the challenges we’re facing now are extreme — I don’t minimize those — but if you don’t get up every day with a positive message and a can-do attitude, then you might as well have admitted defeat. And I’m not big on admitting defeat when I think that the futures of my kids and grandkids are at stake.

I also think there are lots of reason to be hopeful. The federal government is clearly stepping aside on many of the protections that we value, but it’s just a matter of time before people speak up. I think it’s our job to make it clear to them what we’re losing and how we need to move forward.

GAZETTE: Do we focus too much on the federal government? Do we forget all the things that are going on at the state level, and that, as you’ve pointed out, more people are putting solar panels on their houses and buying electric cars?

McCARTHY: We do, and we forget all the solutions that are available and that are already cost-effective.

There are many solutions for clean energy already in the marketplace. If we’re creative, with cities and towns and grassroots-level action, we can make those solutions available to everybody. You don’t need a federal government to regulate and you don’t need it to provide leadership. It’s better if it did, but if it doesn’t, that shouldn’t stop what’s happening in the U.S.

There are lots of really good things happening at a time when the federal government is asleep. People look at the eight years of the Obama administration, the work we did, but forget that it was built on a foundation of grassroots-level action, action at the city level, state level, regional level, and without all of that, wouldn’t have happened.

GAZETTE: It’s got to be hard to see a lot of the work you did at EPA being dismantled. Do you just put that out of your mind and focus on the task at hand?

McCARTHY: I’m working at C-CHANGE because it’s such a great opportunity to be at Harvard with young people — to motivate them and to see the information that they have available to them and the expertise they’re developing and to know they want the science to actually work, not just to provide information but activate people and government and policies and rules and actions. It’s so much fun.

That’s why I’m here. I divide that with the time to respond to what’s happening at the federal level, to try to have my voice out there in support of EPA and support of the science. I will not deny that I get angry at times when I see that science is being attacked and see some of the rules that are out there that I don’t think are based on science, the law, or even real facts.

It’s bothersome because I see it as a dismantling not just of EPA, but of science itself. And frankly, I’m getting calls from a lot of other countries to try to explain to them why the U.S. is acting this way, because it undermines science everywhere and it undermines the international efforts that have to happen, particularly on climate.

That’s hard. I’m not denying it and I’ll raise my voice on those issues. I will raise my voice in defense of science and scientists. So will C-CHANGE, because that’s what we do. But I’m not going to let it blind me to the more positive things that are happening or to the opportunities that are available today.

McCARTHY: These are areas where we think we have the capacity to make a difference right now.

Most of the world is going to be living in urban areas — up to two-thirds of the population — by 2050. How do we work with mayors to identify the best things they can do to invest their money to reduce impacts from climate? How do you do that in a way that improves health today?

Seventy-five percent of the buildings that are going to house those people are not yet constructed. If we don’t talk about buildings now, when are we going to? When we have to retrofit everything that we’re building between now and 2030? Or 2050?

We are absolutely cutting-edge in our understanding of how you do green buildings, but there’s been very little discussion as to what that means for indoor air quality. We think we have opportunities to talk about the impacts of indoor air quality on health and on the performance of that building: what it means for workers, what it means for individuals. There’s a great opportunity to connect with the business sector to move those issues along, as opposed to just talking to individuals about air quality in their homes.

We recognize that air pollution is one area where climate change has immediate and extreme health consequences. Air pollution internationally, as well as domestically, is going to be a huge driver of investment. And we have the best scientists in the world on air pollution.

But some of the biggest challenges associated with health are those that relate to nutrition — good nutrition and getting sufficient food and water. Climate change is going to disrupt food supplies across the world. We have folks in our Department of Nutrition who have understood this for a long time and will inform us not just about diet but also what that means in terms of a changing climate. Climate change can also result in large-scale migrations of populations, which can inundate both food and water systems in the places where they go. We have to start thinking more thoroughly about that.

GAZETTE: What is the biggest non-climate environmental problem that you see?

McCARTHY: That’s a really good question and how we answer it could change every day. But the attack on science itself is a fundamental problem.

There are two other areas that worry me a lot: the amount of chemicals that are in the marketplace today, and nanotechnology that has never been really looked at in terms of impact on people and health. There are all these nanotechnology advances that open up a world of opportunities in the health care sector. It’s terrific, but it’s totally unregulated. 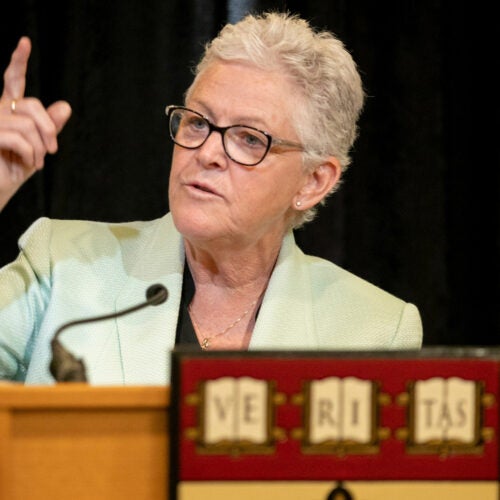 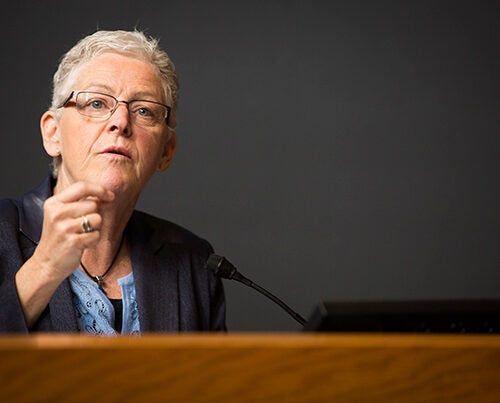 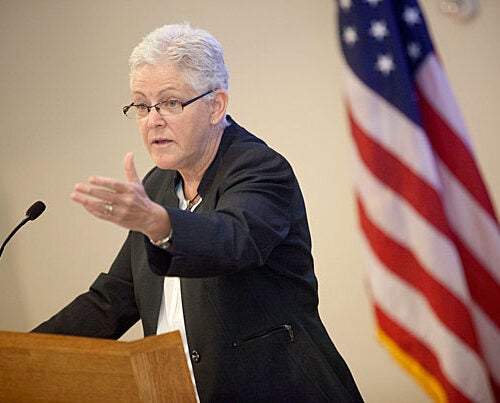 GAZETTE: I remember talking with a faculty member not too long ago about a class of chemicals that people don’t worry about because they don’t know about them — I think they are used in food-package lining.

McCARTHY: That’s what concerns me, in the U.S., emerging contaminants. I’m afraid that in our rush to make America great again, we’re going backwards on this.

You’re probably talking about PFAS, which are really pervasive. They are everywhere, it seems. And they are extremely concerning in terms of their health impacts at very, very low levels. It’s just one more failure in the system and I think these things are going to be mistakes that could have been avoided.

Probably directly related is aging water systems in this country. In the air world we’ve had great research and a continued push for innovation in terms of technology; in water we have not. I think that is where we’re going to see things like these chemicals getting into the system.

GAZETTE: The water pipes are buried, not like with air pollution: a big black cloud coming out of a smoke stack.

McCARTHY: That is why this center is hoping to get information out to people, to give them a good sense of what the science is saying, credible science that doesn’t require the kind of endless discussion that the federal government needs.

I know if I have a chemical in my system that tremendous science tells me is damaging, I don’t want it there anymore. That’s why a center that provides valuable information on science — without thinking that the sole audience is the EPA — is important today, because consumers are going to drive change in products, in drinking water, in their expectation for what is clean and what is healthy. They are going to have to stand up and I think they can. There have been expressions of that already that are really important to think about.

Walmart was the big driver in getting BPA, which is an endocrine disruptor, out of baby bottles. EPA was taking endless amounts of time — and is still working on its endocrine disruptor program because this administration doesn’t want to fund it. And Walmart overnight said, “This is ridiculous. We don’t need it. There are bottles without it, so we aren’t buying any with it.” Boom, the market changes.

That is what I want this center to think about: Where can science change markets and get them over a tipping point, simply by working with the public to enhance their understanding of the risks and working with the business community to make that change happen.