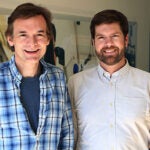 Speaking at Harvard this week, former EPA administrator Gina McCarthy urged an audience of climate scientists and health experts to stop sulking over the Trump administration’s anti-climate-science stance, to get to work, and to speak out.

“Get the mopes off your faces and pull up your big-boy pants,” she said.

The long-term nature of climate change ensures that the efforts of one administration will have little impact, McCarthy said, listing several reasons why momentum for addressing the crisis will be difficult to slow. Chief among those reasons, she said, is work at the state and local level.

McCarthy, who served as administrator of the Environmental Protection Agency from 2013 until January, addressed an audience of about 100 at Jefferson Hall as part of Climate Week at Harvard. In a talk that was by turns humorous, grim, and hopeful, she insisted that the country is in a different place than it was when President Obama took office eight years ago. More citizens — business leaders among them — accept climate science, and supporters of action on the issue are finding their voices, she said.

The average cost of wind power, meanwhile, fell 61 percent between 2009 and 2015, while that of solar declined 91 percent, meaning that clean energy has gotten cheap enough that even unfavorable government policies can’t kill it, McCarthy said. The real threat of such policies, she said, is that the U.S. risks losing a leadership position in the energy technology of the future.

“The clean energy train has left the station. It’s not going back,” McCarthy said.

To those scientists who fear politicizing their work, McCarthy warned that staying silent will make things worse. Recent proposals would add industry voices to the EPA peer review process and bar scientists who’ve received EPA grants in recent years. In effect, she said, opponents of climate action are moving beyond ignoring research and trying to block the science from even being conducted.

“Your only way of not being political is to get in the fray because what these bills do is make your world political,” McCarthy said, urging scientists to talk in their role “as a public citizen who is well informed.”

“Talk, as one human being to another, about what the science tells you and what you want to have done to protect your children and your children’s future,” McCarthy said. “If it’s important to you, it should be important to the person next to you who doesn’t know what you know.”

McCarthy, who is on campus for fellowships at the Kennedy School and the Harvard T.H. Chan School of Public Health, spoke at an event titled “Human Health in a Changing Climate,” sponsored by the Harvard Global Health Institute (HGHI) and the Climate Change Solutions Fund. President Drew Faust offered introductory remarks, calling skepticism about science in Washington, D.C., “unfounded” and “unwarranted.”

“This permeates public discourse across our country,???? Faust said. “Research that is essential to national and human progress is under assault, and the expansion and perpetuation of knowledge, for the first time in my lifetime, seems to be something that none of us can take for granted.”

In addition to McCarthy’s talk, the event featured panels on climate change and human migration, climate from a physician’s point of view, and ways to communicate the health impact of climate.

In the discussion on migration, Jennifer Leaning, the Francois-Xavier Bagnoud Professor of the Practice of Health and Human Rights, and Michael VanRooyen, head of the Harvard Humanitarian Initiative and a professor of emergency medicine, talked about ways in which climate effects — longer droughts, flooding, stronger hurricanes — force people to move.

Leaning offered Syria as an example of that process. Internal migration was prompted by a severe drought, one that scientists say was exacerbated by climate change. Farmers moved to a part of the country less affected by drought and already hosting refugees from Iraq. The subsequent strains led first to protests and then to the violence that drove millions of Syrians out of the country and into neighboring nations.

The president’s executive orders will have little effect on environmental rules that have been finalized, McCarthy said, as undoing those rules is as time-consuming as proposing them. In addition, she said, regulations that have been supported by sound science in the rule-making process can’t be undone without opposing science — and, if presented, that science will have to be explained in court.

“I know what it takes to put those rules together. They ain’t got it,” McCarthy said. “We have not lost, they have just set a stage for a battle in a different location.”

McCarthy acknowledged that Trump’s proposed EPA cuts would devastate significant functions of the agency. If adopted, the cuts would reduce the agency budget by a third, and the money for science by half. Though the rationale would be to return responsibility for regulating pollution to the states, the proposal would also cut state funding by 45 percent, McCarthy said. A possible bright spot, she said, is that Congress has a long history of ignoring presidential budget requests as it drafts its own spending priorities.