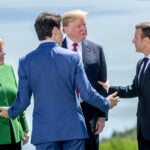 Evan Bernstein’s job has gotten increasingly difficult since he joined the Anti-Defamation League as New York regional director in 2013. Not only has the scope of his responsibility broadened — in June, the ADL merged two offices, adding all of northern and central New Jersey under his leadership — the urgency of his work has grown.

FBI statistics show that single-bias hate crimes increased from 5,818 in 2015 to 6,063 in 2016, or roughly two every three days, and multiple-bias hate crimes nearly doubled, from 32 to 58. More than half of those crimes targeted victims because of their race or ethnicity, and there were large increases in anti-Semitic (55 percent) and anti-Muslim (25 percent) crimes, as well as more crimes against members of the LGBTQ community.

Bernstein, A.L.M. ’11, believes the answer is a better understanding of the connected world in which we live. Since graduating from Harvard Extension School, Bernstein has toured all corners of his region listening to victims, speaking out against injustice, and visiting classrooms in an effort to build stronger relationships in his communities.

Bernstein sees technology as the most powerful tool in spreading, or stopping, the proliferation of discrimination and bigotry in America. The greatest hope, he says, is the younger generation.

GAZETTE: What’s different in this country now than when you graduated from Harvard Extension School (HES) that has precipitated this rise in hate?

BERNSTEIN: There have been many changes in the hate landscape since 2011. Politically, the U.S. seems to have moved further to the left or further to the right, with an ever-shrinking moderate middle that is so important in our society. With respect to technology, there have been even bigger changes. Twitter and Facebook have grown at rates that many never thought possible, and have given people a platform to breed hate at an alarming rate. Many years ago, the ADL was very influential in de-masking laws around the Ku Klux Klan. Once the members of the Klan had to meet unmasked, with their faces shown publicly, they lost some of their power and negative influence. Fast-forward 60 years and these groups are meeting online, masked behind technology. Now they are spreading their hate with millions of tweets and posts, which can spread to many more people, much faster.

GAZETTE: Why do you think the rise of hate in America has gained so much momentum? How was it allowed to spread so quickly before running into significant resistance?

BERNSTEIN: People can connect with other haters in ways they could not before. Doxxing has increased. This is the internet-based practice of researching and broadcasting private or identifiable information on people. Doxxing helps hate spread like wildfire on the web, so instead of small groups targeting people, tech now allows millions to target someone at one time.

The internet has also afforded normalization of hate and is making society numb to it. Most people now are very selective about who they follow and what type of news source they read. If a person does not like a friend’s stance or a news source’s position, they simply unfollow and then get only the news and information that plays to their values. This is dangerous and hurts people’s ability to understand the “other” in their community. This behavior leads to hate.

Also, it is impossible to fully filter what young people are seeing on the internet. Hate is a learned behavior, and children are learning to hate from what they read online. It is the job of parents, clergy, community leaders, and especially our elected officials to help push back on this new wave of hate. Our new national CEO, Jonathan Greenblatt, quickly opened an office in Silicon Valley in order to hold technology companies more accountable for their power and influence. These companies cannot just worry about their bottom lines, they must also be more aware and socially responsible. ADL is at the forefront of that movement.

GAZETTE: What are some of the lessons you learned at the Extension School that have helped you?

BERNSTEIN: The graduate management coursework I took at the Extension School is something that influences my everyday decisions. As part of my role, I analyze my region from many different lenses: operations/financial, resource development, human resource, and programmatic. To this day, I continue to reference the HBS nonprofit and for-profit case studies that we used to analyze and understand these areas.

The biggest lesson I learned from my program is that all of those areas are critical to organizational success. If one component is out of sync, then everything else is out of sync. Without strong programs one cannot raise money. Without great staff one cannot create or implement great programs.

Prior to my graduate experience at the Extension School, I only saw nonprofits through a resource development lens because my previous training only exposed me to that philosophy. The Extension School transformed the way I approach my professional decisions. I now see nonprofit organizations with a 360-degree lens, and not just in a limited silo. That is a gift and something that I appreciate every day.

GAZETTE: Was there a seminal experience or defining moment at HES when you knew that the path you were on would lead you to your current position?

BERNSTEIN: My childhood was the seminal experience that defined my path into my current work. My father was a nonprofit leader in Southeastern Connecticut for many years, and my mother was the head of special education in my elementary school. Both my parents believed in giving back to society and had a deep sense of social justice. Watching my father run his board of directors meetings and implement his community programs was exciting, and something that has stayed with me to this day.

I never considered a profession that would not afford me the opportunity to help society in some way. To be able to work for a 105-year-old anti-hate organization like ADL and run its largest office is a dream come true. When I meet with community leaders or elected officials in New York and New Jersey, I realize how lucky I am to be able to push back on hate and make a real difference.

From an HES perspective, a seminal moment for me was utilizing case studies about nonprofits, and when I was selected to sit on the Hauser Center for Nonprofit Organizations student advisory board at the Harvard Kennedy School. To be the only HES student with a group of many other current and future leaders of the nonprofit space was really special. The conversations the group had about Harvard and the overall space around NGOs was something that really solidified my love of this work.

“The most important tool to fighting the rise of hate in America is educating one’s self and peers.”

GAZETTE: What role can education play in stemming the rise of hate?

BERNSTEIN: Education is the key in fighting hate. Hate is a learned behavior and as a society it is our job to realize that fact and give children the proper tools to push back.

Children need to learn to respect others and not hate because they are different. Our signature education programs were started in the 1980s. Programs like No Place for Hate, Words to Action, and A World of Difference Institute reach hundreds of thousands of students in New York and New Jersey every year. As a result, ADL has reached millions of adults and youth through these anti-bias education programs. These programs have been widely recognized and peer-reviewed for their efficacy in promoting justice in schools and society. I have personally sat with students and witnessed schools that were once rampant with hate change their culture because of our educational team’s hard work. These are some the most gratifying moments I have had.

GAZETTE: A recent poll of Americans found that nearly two-thirds of respondents believed racism to be a major problem in the country. What are your views on how we are currently handling race relations?

BERNSTEIN: I am very worried about the divisions in this country and how fast they are growing. When top-level elected officials help increase the divide by using Twitter or speeches to push hate, society must demand better. Children watch what leaders do and say. We must be better role models inside and outside of our homes. It’s imperative that we do not read news with tunnel vision. We must expose ourselves to diverse opinions and news sources. That precious moderate middle I mentioned earlier is in serious jeopardy if society continues down the path it is on.

GAZETTE: What do you see as our best chance to move forward in a positive direction in the future?

BERNSTEIN: Young people give me hope for the future. I have the opportunity to work with many schools every year. What gives me hope is that students want their world to be a better place. They want a world without hate and are working so hard to change society. These young people will soon be adults and they will become the business leaders and elected officials who will change the world for the better. I believe in my heart that they will make our society more tolerant and moderate. It is our job to support them and give them the resources they need to fight hate.