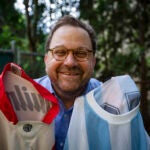 Supreme Court Justice Anthony Kennedy announced his retirement from the country’s top court Wednesday. Kennedy has long been a crucial swing vote on key Supreme Court decisions, and his replacement has the opportunity to significantly change the ideological makeup of the court. Maya Sen, associate professor of public policy at Harvard Kennedy School, has researched the political leaning of courts and is an expert Supreme Court watcher. The Ash Center for Democratic Governance and Innovation asked her about the impact Kennedy’s retirement will have on the court and the country.

Ash Center: What’s your reaction to the announcement that Kennedy is retiring?

Maya sen: Some surprise, but not entirely surprised. There were rumors going around for at least one or two years since Trump was elected, that Kennedy was considering retirement, and some of the things he’d written in some of the opinions in the last week had indicated as such. So I don’t think anybody who follows the Supreme Court closely was very surprised at the announcement. Even so, this is an earthquake for the Supreme Court. This is an institution that changes very slowly, and Kennedy is a really important player on the Supreme Court.

Ash Center: How could this alter the ideological balance of the court?

sen: This is why Kennedy’s retirement is such an earthquake. Kennedy occupies what we would call the median position on the Supreme Court. Colloquially, what that means is that he’s basically the swing justice. For the most part, he votes with the conservatives, but every so often he votes with the liberals. And he votes with the liberals in cases that are particularly important, and without Kennedy, liberals can’t win at the Supreme Court. The reason why he occupies this median position is that he’s the ideologically most moderate of the conservatives. Now, with his retirement, Trump controlling the White House and Republicans controlling the Senate, they can nominate and confirm a candidate that’s very much to their liking. We’ve seen this in the past, with candidates like John Roberts, Sam Alito, Neil Gorsuch — judges who are extremely conservative. So, we might assume that Kennedy’s replacement will be someone who looks quite similar to Neil Gorsuch. That would shift the court’s epicenter significantly to the right.

Ash Center: What were some of the areas where Kennedy sided with the more liberal judges?

sen: Probably the best example is LGBT rights. Kennedy had a particular reputation for being more supportive of LGBT rights and wrote a few of the influential opinions in that area. That will no longer happen moving forward. It’s likely that reproductive rights cases will also be impacted. I think the overall takeaway is that it would be very, very hard to expect a five to four majority in favor of the liberal side. On these highly politically charged cases where Kennedy was often the swing, it would be up to someone like John Roberts to side with the liberals. And he’s significantly more conservative than Justice Kennedy. So, in cases like gerrymandering, the best that progressives and liberals could have hoped for was a five to four opinion with Kennedy being the swing in favor of a kind of cracking down on partisan gerrymandering. That is no longer a possibility with Kennedy retiring. You know, if I were a progressive attorney, I would probably not want to see my case go up to the court. It’s not going to be a favorable court for voting rights sorts of cases.

Ash Center: How will this change legal strategies?

Ash Center: Who do you think President Trump is likely to appoint to the bench?

sen: I suspect that Trump is going to nominate someone very similar to Neil Gorsuch. Gorsuch is probably behind Justice Thomas, the most conservative member of the court, and I think his nomination made a lot of people who are Trump supporters and traditional Republicans very pleased. So, a well-respected but very, very conservative appeals court judge.