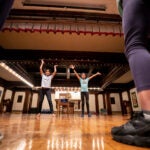 Harvard College roommates from varied backgrounds say their differences draw them together, broaden their education

This is the third installment in Learning from Difference, a five-part series on diversity at Harvard.

“We try to get together and make food once a month, or sometimes eat at restaurants,” said Wade. “They are pretty nice moments of exchanging pieces of our cultures.”

Learning about their different backgrounds through a shared love of food has been a joyful part of Wade’s time at Harvard, but also a critical aspect of a broad-based education that grows through small moments outside of the classroom. Wade, who is African-American and grew up in Miami, said his housemates’ diversity crosses race, geography, socioeconomic status, concentrations, and even extracurricular interests.

“I hoped and expected the environment to be a melting pot, but I didn’t expect it to be as celebrated as it is,” said Wade.

This enriching experience for Wade is how College administrators hoped residential life would unfold when they decided to implement random House selection for students who had chosen blocks of friends with whom to live. Harry R. Lewis is the former dean of the College (1995–2003) who co-chaired the Harvard structure committee’s report that prompted the change. Lewis, the Gordon McKay professor of computer science, said the mission of a residential college stems from the belief that education goes on 24 hours a day and, conversely, self-selection limits learning opportunities.

“As human beings, our natural inclination when we make a choice is that we don’t seek out the person we know least,” he said. “But a lot of the time that is exactly what we should be doing because it encourages us to learn something from people who can share stuff we don’t know.”

Angie Torres ’19, who lives in Lowell House, said the House environment often creates those opportunities. The rising senior studying integrative biology recalled, as an example, talking to a housemate from South Korea while studying one night in the dining hall.

“It’s a place I’d never thought about or considered, and I’ve never been to East Asia. But we had this long conversation about society and social norms in South Korea, where he was from,” she said. “Because of the community, I talk to people I never would have run into in another situation. There’s no class or club overlap, but everyone here is passionate about something or other, and I can still learn about them and broaden my horizons.”

Initially, Thomas Dingman, who was associate dean of the College when he helped implement the plan, said it had its skeptics. Dingman, who retires as longtime dean of freshmen later this month, remembered naysayers who feared that randomizing the process would “create bland, cookie-cutter images and ultimately reduce student satisfaction.”

“But the opposite happened. The Houses, filled randomly, did amazing things. They mounted their own dramatic productions, participated fully in intramurals, and had their own music societies,” he said. “If what keeps people from working together where there are pronounced differences is ignorance and fear, the more we can get them to understand people as human beings, the better shot we have for solving some of the world’s problems.”

The success of the current House model helped prompt Michael D. Smith, Edgerley Family Dean of the Faculty of Arts and Sciences, to support a sweeping campaign for House renewal, with one goal being a deepened sense of community. The completion of Lowell House’s reconstruction in the summer of 2019 will mean the College has renewed half a dozen Houses since Quincy reopened in 2013, creating residential spaces that are as accessible and welcoming as the communities flourishing inside.

“Students tell me all the time that it’s the people who most make their Harvard experience meaningful. House renewal was imperative because it takes 100-year-old buildings and aligns them with how students live and learn together today. That change has a powerful impact on the student experience,” said Smith.

Rising junior Michael Gao ’20 lives in Dunster, the first full House to be renovated, with friends he met through classes and clubs. Though they “lean STEM” in academic interest, they come from such diverse backgrounds as Vietnam and Ohio, and the 19-year-old molecular and cellular biology concentrator described the diversity he finds in Dunster as “osmosis.”

“You just get immersed in that kind of environment,” he said, adding that one of his most poignant lessons came by way of his blockmate, Nathan Grant, whose brother Nik has Hunter Syndrome.

“It’s an important part of his life. Nathan talks a lot about sibling care. I had known people in passing with some type of disease, but meeting and getting to know him better was a pretty formative experience,” Gao said.

Similarly, Jack Deschler ’19 described his tightknit House experience as “one of the best things to happen to me at Harvard.”

“There’s something to be said of a shared experience of 300 people that wouldn’t happen if everyone lived off campus or if we could choose where to live,” he said.

So passionate about Cabot House life is the rising senior studying computer science and government that he co-chairs of the student House committee, which helps create programming such as Cabot’s theater program and House-wide events such as formals and weekly study breaks.

“The committee itself is pretty diverse, with a majority women, and that’s informed the decisions we’ve made in positive ways,” said Deschler, 21. “Having those voices in the room when we’re discussing things makes me feel better when we’re making decisions.”

Tom Conley and Verena Andermatt Conley, who have been faculty deans of Kirkland House for 18 years, are present when most decisions about residential life are made. Sitting in their living room with Max and Bella, two of their three Bernese mountain dogs, they pored over Kirkland directories from 2003 and 2017.

“There is so much more diversity now. The transformation has been absolutely fabulous,” said Verena, a long-term visiting professor of comparative literature and of Romance languages and literature.

Added Tom, the Abbott Lawrence Lowell Professor of Romance Languages and Literatures and of Visual and Environmental Studies, “We take it as our task to make it a very level and lush playing field. Biases are reduced through the art and act of living and of making a community.”

The Conleys expect to steward nearly 400 students in Kirkland through meals, seminars, theater performances, and other activities next year.

“Our mission is to make a House where people feel comfortable, where they can meet with people from a variety of backgrounds,” said Verena. “Mutual respect and understanding have led to much more interaction between different races, nationalities, and cultures than there had been when we first arrived. The microcosm of the House is really the world of tomorrow.”