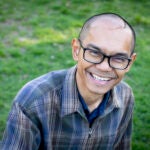 Reflecting on Charles Hamilton Houston, the Harvard Law grad who systematically questioned ‘separate but equal’ in the courts

When the U.S. Supreme Court outlawed segregation in public schools on May 17, 1954, in its ruling on Brown v. Board of Education, the accolades mostly went to Thurgood Marshall, the NAACP lawyer who litigated the case before the court.

But then and later, Marshall, who became the first African-American Supreme Court justice in 1967, gave credit to his mentor and teacher Charles Hamilton Houston, HLS ’22, S.J.D. ’23, a special counsel for the NAACP who conceived the legal campaign to desegregate public schools. At Houston’s funeral in 1950, Marshall said, “We wouldn’t have been anyplace if Charlie hadn’t laid the groundwork for it.”

With the anniversary of Brown v. Board nearing, the Gazette sat down with Tomiko Brown-Nagin, Daniel P.S. Paul Professor of Constitutional Law at Harvard Law School and faculty director of the Charles Hamilton Houston Institute for Race & Justice, to discuss Houston’s role and influence. Brown-Nagin took over the directorship a year ago, succeeding Charles Ogletree, the Jesse Climenko Professor of Law and founder of the institute. (Brown-Nagin has just been named dean of the Radcliffe Institute for Advanced Study and will assume her new role on July 1.)

She spoke about Houston, his legal strategy to dismantle Jim Crow laws in the courts, and the institute’s mission to continue Houston’s “unfinished” work.

GAZETTE: What should we know about Charles Hamilton Houston’s legacy in the fight against segregation in the United States?

BROWN-NAGIN: You should know that Houston was a special counsel for the NAACP for many years, and he was the intellectual architect of the NAACP’s legal strategy against Jim Crow. He was also one of Harvard Law School’s most distinguished graduates. In 1922, he was the first black student elected to the editorial board of the Harvard Law Review.

Houston was also a law teacher and the vice dean of Howard Law School, and that’s important to know because he wanted to raise the standards and the profile of Howard Law School in hopes of servicing the African-American community. Houston felt very strongly about the need to train lawyers for public service to send them out into the world so they could serve the special legal needs of the black community around the issues of racial oppression and exclusion and discrimination in the labor market. As you might imagine, white lawyers were not inclined, certainly those in the South, to represent blacks.

GAZETTE: Houston played a leading role in the legal campaign against segregation that eventually led to Brown v. Board. How did he come up with the strategy?

BROWN-NAGIN: In 1930, the NAACP hired attorney Nathan Margold to think of a plan for a legal campaign to undermine segregation, and he suggested that the way to do it was to challenge segregation in schools. Houston decided that the legal strategy should be done incrementally, step by step, to show there was widespread inequality through a series of legal decrees to build the groundwork leading to the fight against segregation in schools.

Houston focused on the 1896 Plessy v. Ferguson case, the “separate but equal” rule, to argue that that was never followed. He came up with a series of cases to illustrate that despite Plessy v. Ferguson, which ruled that segregation is constitutional if the facilities are equal, the Southern states were not meeting their obligations.

BROWN-NAGIN: First, a report commissioned by the Garland Fund, in the 1930s, recommended strategies for undermining segregation and thus improving the quality of life and conditions for black Americans; the report became the blueprint that Houston relied on to challenge segregation in schools. Second, Houston had studied at Harvard and was aware of the trend in the law to apply social science to legal strategy to make change. Third, Houston traveled to the South, with his then–law student Thurgood Marshall, and conducted an investigation of the conditions in which African-Americans lived. They visited the schools for black children and saw they were terrible compared with the schools for white children.

GAZETTE: Can you take us through the sequence of legal cases that paved the way for Brown v. Board?

BROWN-NAGIN: The first legal decree issued by a state court was Murray v. Pearson in 1936, involving the University of Maryland Law School. Houston and Marshall attained a legal order stipulating that a black person was entitled to admission to the University of Maryland Law School because he couldn’t otherwise get an equal legal education in the state, and it wasn’t feasible to create a whole new law school for blacks. That was a really important case in and of itself, but also because Thurgood Marshall was from Maryland and had been unable to attend the law school in his state.

There was another case, Gaines v. Canada in 1938, this time involving the University of Missouri School of Law, where the U.S. Supreme Court ruled that under the separate-but-equal doctrine, Missouri had to admit a black student or create a second school for blacks.

GAZETTE: Houston also litigated other cases outside education to attack segregation. What was his rationale?

BROWN-NAGIN: Houston wasn’t only interested in education, because segregation encompassed a range of areas — the electoral system, the criminal justice system, housing, employment. Among other cases, Houston litigated a case involving the exclusion of blacks from a labor union. In Steele v. Louisville & Nashville Railroad Co. in 1944, he was able to get the Supreme Court to rule that it was unlawful for a union to refuse to represent black workers; unions had a duty to represent all workers.

Houston also litigated racially restrictive housing covenants. He was the lead lawyer in Hurd v. Hodge, the 1948 U.S. Supreme Court case that undermined the legal and policy basis for excluding blacks, Jews, and other people deemed undesirable at the time from purchasing homes in white neighborhoods in Washington, D.C. — Houston’s hometown. Along with Shelley v. Kraemer in 1948, the court ruled that judges could not enforce these exclusionary covenants.

Houston argued many other cases before the Supreme Court. He was a remarkable figure, an incredibly brilliant man who laid the foundation for Brown v. Board of Education, the 20th century’s most important constitutional case, holding segregation in schools unlawful.

GAZETTE: And yet, Houston is not as well-known as Thurgood Marshall and other civil rights advocates …

BROWN-NAGIN: Houston is well-known by some academics, lawyers, and students of African-American history, but he certainly is not a popular figure in the way that Thurgood Marshall has become. There are no movies about Houston in the way there are several about Marshall, but it was Houston who laid the building blocks used by his prized student, Marshall, to litigate and win Brown v. Board of Education.

Houston died in 1950, the same year the NAACP went from litigating cases testing Plessy to an all-out attack on segregation in schools. Had he not died, he would have been right there arguing Brown v. Board of Education before the Supreme Court. And it’s a shame that he was not around to take part in the litigation. And yet people should know that it’s Houston, his legal strategy, and his intellectual and political energy behind that work.

GAZETTE: The Charles Hamilton Houston Institute for Race & Justice was founded to preserve Houston’s legacy and to continue his unfinished work. Can you explain?

BROWN-NAGIN: The institute’s mission focuses on the unfinished legacy of Houston in education, safety and healing, employment, and other areas because this country has still a long way to go, notwithstanding the fact that formal segregation in education was banished in 1954 and, more generally, through the Civil Rights Act of 1964. Despite these formal changes, and as Houston himself knew, there is a big difference between law on the books and law on the ground. The reality is that on the ground, African-Americans and other racial minorities, including students, are disadvantaged in terms of resources and also still are subjected to discrimination, and still need our help.

In education, the Houston Institute hopes to continue to advocate for those students and raise awareness about the forms of discrimination that they face, including schools that tend to have fewer resources than some of the suburban, majority-white schools; teachers who are less experienced; and disproportionate discipline, which funnels some of these students into the criminal justice system, where, again, discrimination and disadvantage are rampant. The Houston Institute, together with UCLA’s Civil Rights Project, recently published a report, Disabling Punishment, that documents the shocking inequalities in school discipline suffered by black students with disabilities. That problem is a part of Charles Hamilton Houston’s unfinished business.