A plan to pay it forward, each step of the way 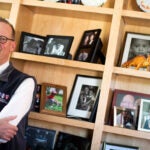 Raj Salhotra, who will graduate with a J.D. from Harvard Law School (HLS), has always had mentors to show him the way — from his parents to professors to politicians in his native Houston.

But Salhotra, 27, knows not everyone is so lucky. And he has a plan to help those less fortunate.

“The responsibility of privilege is to pay it forward,” Salhotra said. “I’m lucky that I have been able to meet people and build a network. It’s my responsibility to connect folks in my network to those who are striving but aren’t there yet.”

Salhotra said he’s passionate about education policy, and believes that improved access to higher education can lessen societal inequality. In 2015, he and a friend in Houston launched SWAG to College (the SWAG stands for “Students With Ambition Go”), a nonprofit that provides peer mentors to help underserved high school students get into college, college students graduate, and college graduates enter the workforce.

The idea came to Salhotra in 2015. Ordering lunch at a Subway restaurant, he asked the register clerk about his college plans. The clerk answered he wanted to go to the University of Houston, but even though he was on track to graduate high school and had a job, he didn’t know where he’d get the money for tuition.

To Salhotra, the clerk personified a tremendous need. Teenagers at private schools get help navigating the path to college, but qualified public school students tend to get less support securing financial aid and other basics.

“You realize that there are far too many students who are working hard and have a dream and they’re not able to reach their dreams,” Salhotra said. “We started SWAG to College because we knew people need mentors to succeed. I knew firsthand.”

His own first mentors were his parents, who were driven to realize the American Dream. Salhotra’s father, an environmental engineer, came from India to America as a graduate student with only $42. His mother arrived from India as a child, became a microbiologist, and taught at the University of Houston.

At first, Salhotra shared their wish that he study business at Rice University. But a White House internship at which he helped high school students complete their college applications inspired him to change course and pursue public education policy. When the next semester began, Salhotra signed up for classes in social inequality and educational inequity.

After graduating in 2013, Salhotra decided not to a pursue advanced degrees in education. Instead, he applied to HLS to learn the skills of a practicing lawyer that he said would prepare him for a career in politics and public policy.

Salhotra has distinguished himself at HLS, said Mark Jefferson, the School’s director of Community Engagement and Equity. Jefferson, who has known Salhotra throughout his Harvard career, said he is naturally inquisitive and respected by classmates for his ability to make connections.

“I think Raj has a unique combination of keen intellectual ability and real emotional intelligence,” Jefferson said. “You know how many smart lawyers there are? Lots of them. The challenge will be what else do you bring to the table to be successful. Raj gets that part. He gets that it has to do with people and relationships and connections.”

Salhotra said mentoring can only do so much to break down barriers to social equality, which is why he plans to run for public office at some point after returning to Houston.

“A mentor can guide you on a path, a mentor can open doors for you,” he said. “But a mentor cannot breakdown systemic barriers. That takes policy solutions.”

Salhotra said he saw that as an intern working for the city of Houston, where he helped officials scour the budget to find funding for deserving programs. After Commencement he’ll return there to work for one of the city’s most prominent law firms, Baker Botts. And while he can’t say when, he said he “absolutely” plans to run for elective office in Houston.

“A public official has the opportunity to really shape policy and provide opportunities for folks who maybe aren’t able to reach their dreams or don’t have equal opportunities right now,” Salhotra said.