Her app for a socio-medical goal: Anthropology without borders 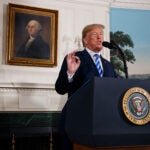 The split-second pause Margot Mai ’18 took before deciding to let her cellphone go to voicemail wasn’t just the usual. The message would reveal the fate of her caller, “Kaitlyn,” a 24-year-old Nigerian woman seeking asylum in France.

Instead of taking the call in the public gallery at the Minda de Gunzburg Center for European Studies (CES), she waited to share that moment privately.

“Waiting” Mai said, is a principle concept in her work as an “anthropologist caregiver,” a term that carries weight.

Mai, 22, spent last summer in Marseille, working with a French nongovernmental organization (NGO) that aims to rehabilitate Nigerian sex workers — undocumented women who migrate to Europe through a dangerous infrastructure in search of a better life. Mai’s mission is to help provide that opportunity for women like Kaitlyn.

“There is a moral necessity for care, and it’s important to me that health and well-being — as basic rights — are accessible. I’d like to be part of making this available to people who don’t have it, in a way that’s sensitive and consensual,” Mai said.

It is the imposition of frameworks in medicine and developmental programs, some of which hobble the ability to seek better health, that drove the student anthropologist to offer assistance to the young migrants.

“Rather than perhaps impose [on them] the mentality that you’re a trafficked victim who needs to be saved from the streets, [it instead] is to understand that you are a person who found international mobility through this work, and right now you’re dependent on it. So how can we address your needs overall,” Mai said. “It’s a complex situation, focusing on an urgent need for this specific, almost displaced population.”

Mai’s interest in medicine began as a child in California, when her mother showed her a magazine article about Doctors Without Borders. Captivated by the story as a 6-year-old, her connection to the mission of providing immediate medical care developed. Although no one in her family practiced medicine, she grew up admiring her pediatricians. In high school, she volunteered in the emergency room at University of California, San Francisco, Benioff Children’s Hospital Oakland.

“I didn’t choose medicine; it emerged and I couldn’t ignore it,” Mai said. “If I sense that there’s a need, or someone is suffering or is having an ugly experience, it’s hard for me to ignore, I feel compelled to attend to it.”

Mai came to Harvard to pursue biology and pre-med, only to discover anthropology; she changed her concentration early in her sophomore year. Anthropology at Harvard includes a long collaboration in medicine — specifically as medical anthropology — and she found her calling.

But it is not a straightforward path for Mai, whose secondary concentration in global health and health policy helped shape her decision to pursue an M.D.-Ph.D. The dual degree in both medicine and anthropology can be a 10-year endeavor.

“A couple of things have become clear to me during my time at Harvard: how I envision health and how I want to practice health,” Mai said. “Anthropology has been really helpful for me to view medicine as very much global and holistic, far-reaching and not just limited to physical symptoms and a biomedical report.”

It was her time in Marseille researching the social-legal integration of sex workers that solidified her ambition to become a physician-anthropologist.

Employing a Senior Thesis Research Grant from CES and and a Summer Travel Grant from the Weatherhead Center for International Affairs, Mai immersed herself in the precarious setting where migrants live in a repressive holding pattern.

Uncertain of their fate or even their identities, they are not only trying to survive, but also recover from the trauma of migration. After enduring inhumane conditions, under a constant threat of rape or murder, drowning or starving, burns and other injuries transcribed on their bodies, their problems are not over when they arrive in Europe. She provided volunteer street outreach, distributed risk-reduction supplies, and even spent time cooking meals and going to church services.

“She got to know these vulnerable young women extremely well and was able to come to a deep understanding of their emotional, social, and moral condition,” he said. “She became friends with them and they told her things that I suspect few people would have ever heard from them. Her ability to elicit this information to build friendships and work on behalf of these women is quite extraordinary.”

Mai’s efforts in Europe were both academic and personal. Fluent in both French and Italian, she maintains Italian citizenship through her mother, who was born in Naples.

“Europe feels like home to me because of my roots, and there is so much social change happening there. I am inspired that institutionally at Harvard, and at the Center for European Studies in particular, there is care about what is happening with the migrant crisis and people who are excluded in the European sphere,” said Mai. “It was significant to me that I could do my research there to build toward something where I can make a difference not just individually in these people’s lives, but on a larger scale one day.”

Mai intends to continue with her research, but after receiving a postgraduate Frederick Sheldon Traveling Fellowship, is taking a gap year to practice martial arts in China. Mai, whose grandfather immigrated to the United States from China, doesn’t yet speak Chinese, but she is a black belt in Taekwondo.

“I’ve always wanted to visit China partially because there’s that sense of wanting to be more connected to my heritage,” Mai said. “I’ll be in Beijing first, learning Chinese at a university. I don’t speak Chinese, so this will be challenging.”

But not as challenging as what Kaitlyn continues to face. Her asylum application was rejected, but with the help of a French LGBTQ rights NGO, she successfully petitioned for her case to be reconsidered this fall. Waiting, Mai said, becomes your life process, and sometimes healing is not so much about processing negativity as knowing not to hold it so close anymore.

“There isn’t a lot I can do in that situation. It’s difficult to just be a witness, but you figure out how to make yourself present for the other person,” she said. “The relationships with the people there, and the deep friendships I have formed, are nothing to be taken for granted.”