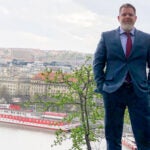 Paramedic to Prague to Harvard

Gabrielle Scrimshaw walks a path for others to follow

When Gabrielle Scrimshaw held her nephew Ethan for the first time, hours after his birth in 2006, she was touched by an overwhelming feeling of love but also by a sudden resolve.

Growing up a Dene in north central Canada, one of the 600 aboriginal groups of Canada’s First Nations, Scrimshaw knew firsthand the challenges that mark the lives of Indigenous peoples.

“I realized that because Ethan was born First Nations, he’d have to face a potentially challenging life,” Scrimshaw recalled on a sunny afternoon near the Charles River. “I also realized that he didn’t have a say in the world he was about to grow up in, and I decided that I was going to do everything I could to make his life better.”

Over the past decade, Scrimshaw has been doing that and more. A Gleitsman Fellow at the Harvard Kennedy School of Government, Scrimshaw is completing a Master in Public Administration. Last year, she earned an M.B.A. from the Stanford Graduate School of Business.

Scrimshaw grew up in a town of 800 people in Saskatchewan, home to the Hatchet Lake First Nation, of which Dene people are part. When her nephew was born, she had just been accepted to the University of Saskatchewan, becoming the first in her family to go to college. To celebrate, her father took her to the only diner in town, where she “had the best BLT sandwich” ever, she said. She and her two sisters were raised by her father.

And so Scrimshaw started down an unfamiliar path for Indigenous peoples in Canada, home to more than 1.5 million aboriginal people, divided among First Nations people, Métis, and Inuit. Together they represent 5 percent of Canada’s population, but a much greater percentage of the country’s poor and unemployed.

From the moment Scrimshaw went to college, she was determined to forge her own trajectory. She graduated with a bachelor’s in marketing and traveled to 18 countries in four years, meeting indigenous peoples around the world and discovering their common history of colonization, discrimination, and forced assimilation. She still feels outrage at the injustices committed against native peoples all over the world, but she prefers to focus on being inspired by their shared strength and resilience.

But it was after Scrimshaw moved to Toronto to work in finance that she became an activist. Working in a bank, Scrimshaw realized there were other Indigenous people who were “quietly succeeding,” and she co-founded the Aboriginal Professional Association of Canada to offer a network and support and keep their cultures alive.

As the group grew, it became a platform to fight against stereotypes and racist assumptions, said Scrimshaw. “I started to stand up a little bit taller and speak a little bit louder about the things I knew to be true about Indigenous peoples,” she said. “I knew Indigenous peoples to be beautiful and strong, more than just statistics flashing on the news about poverty, suicide, and substance abuse.”

More than half the native populations in Canada and the United States is under 30, and Scrimshaw finds reasons to be hopeful. “If we don’t invest in them, there will be tremendous economic costs,” she said, “but if we give people the same opportunities in health care, education, etc., as [we do] the rest of Canadian citizens, we can be the inclusive country that Canada so aspires to be.”

Named “three young aboriginal Canadians to watch” by the Huffington Post, Scrimshaw prides herself on her upbringing and culture. At the Kennedy School, she enjoys regaling classmates with childhood stories of growing up on the Canadian prairie, attending powwows in the summer, having a freezer full of wild meats from deer to caribou to moose, and learning how to skin a bear when she was 12.

Scrimshaw’s mother, like many Indigenous children in Canada until the mid-1970s, was forced to attend a federally run Indian residential school on the way to assimilation. In 2008, the Canadian government apologized for the harm it inflicted on thousands of people by separating children from their families and allowing horrific abuses to occur in the residential schools.

As the person in the middle of three generations, between her mother and her nephew, Scrimshaw sees herself as the one responsible to make sure her nephew’s future is better than hers and her mother’s.

“In the Indigenous communities, our Elders always remind us to think about how our decisions are going to affect the seventh generation,” said Scrimshaw. “This is not a short-term project. It’s a generational thing. When I think about the work I do, I have to think about my kids, my grandkids, and my great-grandkids.”

Scrimshaw plans to start an investment firm to invest in tribal businesses and Indigenous entrepreneurs, which could function as a bridge between Indigenous communities and corporate Canada.

Scrimshaw toyed with working in advocacy or technology, but her time at the Kennedy School strengthened her resolve to invest herself in Indigenous economic development. She said a story told her by an Indigenous Elder helped her see what her mission in the world was. In the story, a young boy is having a hard time following his father as they both trudge through snow. Finally the boy tells his father that it would be much easier if he could step in his father’s footprints. The Elder told Scrimshaw that everything she has done were footprints and that she had to make sure they were the right ones for people to follow.

Scrimshaw is certain she wants to leave footprints for her nephew to step in, and for future generations of Indigenous children to have footprints that give them pride in their cultures and belief in an equal opportunity to succeed in life.

“There is Ethan, but there are so many Indigenous kids living and facing the same circumstances, and those circumstances are not ones they chose for themselves, or what their families chose,” Scrimshaw said. “My goal is to help empower my community with the tools, assets, network, and capabilities that I now have to do right for my community.”