From playing a DA on TV to running for Congress 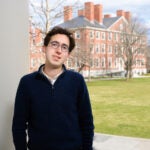 An opportunist looking to learn

Diane Neal has spent much of her life in the glow of a photographer’s flash or the focus of a TV film camera. For a model and actress, it has been lucrative work, but Neal, who graduates with an associate degree from the Harvard Extension School in May, knows a hefty paycheck isn’t everything.

“Money buys you two things: time and opportunity,” said Neal, on campus recently for one of the School’s creative writing seminars. “But if you don’t make use of either one of those things, it’s pointless.”

Best known for her role as assistant district attorney Casey Novak on the popular police procedural “Law & Order: Special Victims Unit,” Neal has made the most of both. She has devoted much of her off-screen time to charity work, and then taken the opportunity to go back to school and use her Harvard education to inform her current political campaign.

“This run is about the people of NY19. I want to represent us. Big money and the party machines have enough advocates,” said Neal, who announced her candidacy for New York’s 19th Congressional District seat in February.

Neal once dreamed of a different spotlight entirely. She graduated high school at 16. “I was the kind of kid nobody spoke to unless they needed their homework done. I did no school plays. I was a science kid. I thought I was going to go into medicine or be an astrophysicist. A Nobel or a MacArthur ‘genius’ prize, that’s the kind of thing I would fantasize about.”

Instead, in 1993 she landed a modeling contract after her sister signed her up for a contest during her first semester of college. For the next few years, Neal crisscrossed the globe for photo shoots, excited by foreign countries and cultures. The travel fueled her interest in and compassion for others. “You see all these people who have such capacity, and because of their circumstances, they are never going to have the opportunity to live up to it.”

Later, on breaks during filming “Law and Order: SVU,” Neal quizzed the show’s guest stars. What “motivates you? What gets you going? What’s your worst fear?” she asked them. “I wanted to absorb everything I could about every part of everyone I met even in every job, from the wealthy people to the poor people to everyone in between.”

She was also eager to know more about the world. “I wanted to go back to school so badly. I was just dying to learn stuff,” said Neal, who recalled “trying to teach myself ancient Greek.”

She considered programs at Columbia and New York University that were closer to most of her filming in Manhattan, but she knew there would be other shoots in more distant locations, and that a flexible schedule was key. “I needed something I could do remotely and in weird pockets of time.” She also wanted a robust program with academic variety. The Harvard Extension School was the perfect fit.

Neal has been enrolled since 2009, working online from New York, or on the road, or on campus for classes when she could. The learning has helped her hone her candidate’s platform.

A course on the psychology of close relationships has helped her better understand other points of view. A class on the ethics of environmental land management has opened her up to new ways of thinking about how humans treat the planet. A course on the science of physical activity has reinforced her belief that staying active is a key to health and that “you can actually build policy around that.”

It was often a struggle to balance her work with her studies. When she was considering dropping a class, she remembers turning to Mark Harmon, whom she worked with during a number of guest appearances on his show “NCIS,” for a pep talk. He offered her some tough love in the form of the Navy SEALs’ unwritten code.

“You just eliminate quitting as an option,” Harmon told her.

Neal persisted despite personal trials, including a divorce, a car accident that sidelined her from work with a back injury needing surgery, and a home ravaged by two hurricanes.

“I’ve been most impressed with Diane’s overall commitment to completing her degree, facing challenges head on, and always with a sense of humor,” said Sue Albrigo, her Extension School academic adviser.

That attitude will come in handy on the campaign trail. Her desire to act crystalized on Nov. 9, 2016. The country’s polarization, she said, fueled her desire to get involved and to “get people excited about this grand experiment of the democratic republic.”

It’s a lofty goal, one she thinks she can accomplish by running as an Independent.

“I wanted to find a way that would have the biggest impact, where the most people would listen,” said Neal. Language on her website echoes that desire. “I offer an alternative to the divisive partisanship where neighbor turns against neighbor for no better reason than a party label. I truly believe in our combined ability to bring out the best in each other.”

For Neal, getting people from both sides of the divide talking is a critical first step, and she plans to use what she’s learned at Harvard to jumpstart the conversation. Her Harvard time, she said, has helped her see the big picture and taught her how to explain difficult concepts. It’s also reinforced her appreciation for listening and for other perspectives, and shown her “how interconnected everything is.”