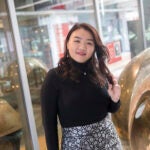 The ROTC commissioning ceremony Wednesday at Tercentenary Theatre saluted the long Crimson line of Harvard students who have joined the military.

Eight years ago, Shawna Sinnott ’10 received her commission as a Navy second lieutenant at a ceremony attended by Harvard President Drew Faust. In January of this year, Sinnott, now a captain in the Marine Corps, sent Faust an American flag she had flown for her in Afghanistan.

“Capt. Shawna Sinnott wrote to explain that on the eve of her fourth deployment, she was sending me a flag she had flown in my honor while she was stationed in Afghanistan,” Faust said in her remarks. “I was deeply moved by her gift and her story, as I have been by the stories of sacrifice and service of all 74 Harvard students I have cheered on as they have taken their officer’s oaths in this ceremony over the past 10 years.”

Faust brought the Reserve Officers’ Training Corps back to campus in 2011 after a nearly 40-year absence. In her speech, she highlighted Harvard’s long tradition of service to the nation.

“Strong connections between Harvard and our armed forces are essential to Harvard’s — and the nation’s — present and future,” she said. “Harvard students aspiring to be leaders and influencers in America and the world need to understand the military. And the military has and will continue to benefit from the contributions of the extraordinary leaders educated here.”

The new officers swore an oath to the Constitution and received their first salute; their relatives pinned their insignias to their uniforms. When the ceremony ended, the warrior-scholars were embraced by families, classmates, and friends.

Asked why he joined the military, Zhu, who grew up in Boston, said he was moved by a desire to give back.

“This country has given a lot to my family and me,” he said. “I wanted to make some kind of impact as a young person — do my part and serve the country.”

Guest speaker Ash Carter, former U.S. Secretary of Defense and director of the Belfer Center for Science and International Affairs at the Kennedy School, commended the new officers for their spirit of sacrifice and for choosing to serve “something bigger than yourselves.”

A historian of the Civil War and the American South and the great-granddaughter of a West Point graduate, Faust saluted the group’s dedication to a “bigger purpose.”

“We do not know yet what path will unfold for those of you on the stage today,” she said. “We do not know what price might be asked. But we know that Harvard has helped you to develop skills and capacities that will enable you to make significant contributions in the year ahead. And we know that the most important and fundamental of your contributions will be the selflessness and service that your decision to join the military represents.”