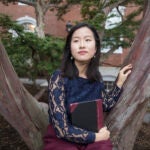 Time off from Harvard helped her thrive

Obstacles aside, physician Wirun Limsawart will return to Thailand with solutions

Neither Wirun Limsawart’s knowledge as a doctor nor his work as a hospital manager could help him resolve Thailand’s national crisis over health care malpractice.

“I had experience as a physician, medical administrator, and medical activist, but all of that couldn’t solve this kind of problem,” Limsawart recalled. “I decided I should have another professional skill.”

But his path to the Graduate School of Arts and Sciences, which culminates in his receiving his Ph.D. in medical anthropology this May, gave him more than additional technical expertise and a double-meaning title to his name.

“I have a particular set of knowledge I made myself. This acumen is useful not only for people in Thailand, but many other places,” he said last month, days before defending his dissertation on universal health care coverage and tuberculosis control.

Limsawart, who is married and has three young children, will return to Thailand to work as a policy researcher for the Ministry of Public Health. In Bangkok, he will join the ministry’s Society and Health Institute, the institution dedicated to bringing medical anthropology into practical applications and policy discussions.

“I’m excited to begin to implement my work. My team in Thailand has begun to write a project to continue working on tuberculosis control, and why we [haven’t been able to] control this epidemic. Even though we have knowledge and technology, we’re stuck,” he said.

The challenging nature of Limsawart’s academic work was matched by a difficult personal journey, one that affected his entire family. Three months before finishing medical school in 2001, he suffered a seizure for what would eventually be diagnosed as a brain tumor. It would return during his Ph.D. studies in the U.S., forcing him to undergo a second surgery, in 2013, and to be hospitalized after another seizure last December. Additionally, Limsawart’s wife has suffered endometriosis and complications caused by delayed care. The chronic pain once left her bedridden for an extended time, and it required the removal of her uterus last year during Limsawart’s fieldwork in the borderland between Thailand and Myanmar.

“It has been a very intense experience,” he said. “Sometimes it was hard to continue with my studies, but I did. My advisers Byron Good and Arthur Kleinman — without them I not only couldn’t have finished my Ph.D., but I could not have survived.”

Kleinman, Esther and Sidney Rabb Professor of Anthropology and professor of medical anthropology in global health and social medicine and of psychiatry at Harvard Medical School, called Limsawart’s work and his humanity “remarkable.”

“What’s most impressive about Wirun is that he belongs to a lineage of deeply morally and politically committed Thai physicians who have brought very high health standards of care to especially very poor Thais living in rural parts of the country. This movement isn’t just admirable; it’s one that needs a fuller understanding,” Kleinman said. “It’s generation by generation of doctors who have gone out to do good in the world. He’s been the chronicler both of this movement and its fruits.”

All the more remarkable for completing his Ph.D. while facing his family’s ongoing health challenges, the 42-year-old has plans to use the lessons learned from their own illnesses, particularly his wife’s, to inform his future work.

“When I speak to people, especially to medical doctors — I’m a doctor myself — sometimes it’s difficult to make them listen to you, especially when you talk about something they don’t believe. In Boston, we met a good gynecologist who did one thing — she listened and believed my wife’s story and her pain,” he said. “When I return home, I will work on tuberculosis for the next decades, but also endometriosis. My wife still suffers as do many women around the world. I think I am now in a good position to pursue study and make change.”