Paramedic to Prague to Harvard 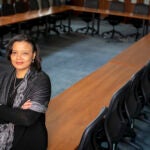 Chan School grad Oren Varnai makes the most of opportunity

When Oren Varnai “checked in” on Facebook from a Budapest café, he didn’t expect to be having lunch a few minutes later with a classmate from the Harvard T.H. Chan School of Public Health.

But the School’s blended, mid-career master of public health program attracts a diverse set of students, many of whom are scattered across America and around the world, brought together by a mix of online and on-campus courses. So Varnai’s classmate being just down the block in Hungary was serendipitous, but perhaps not shocking.

Varnai, a former paramedic and New York City marshal, is himself the kind of person classmates might not be surprised to come across in a far-flung capital. A Foreign Service officer working in the U.S. Embassy in Prague, Varnai came there from a two-year posting in Bratislava, the capital of nearby Slovakia. He’s anticipating a new posting, possibly somewhere in the Balkans, later this year as his term Prague comes to a close in July.

Varnai said the Chan School program, which combines two intensive, three-week on-campus courses with online classes, kicks off with an on-campus session that lets classmates get to know each other face-to-face. After that, they engage remotely for team-based projects, and meet again on campus during the second intensive session.

“Everybody definitely gets culture shock in the first three weeks when you’re there and the fire hoses open,” Varnai said. “The time and effort you put into this are definitely worth it.”

Varnai’s family has roots in Central Europe. His parents left Hungary in 1956, the year the Soviet Union violently suppressed the revolt against Hungary’s communist government. They settled in Israel, where Varnai was born. He moved to New York at age 13.

In 1994 Varnai began studying for his bachelor’s degree at Queens College. A year later, he decided to become a paramedic. He studied nights for his certification and worked full time as a paramedic while continuing his undergraduate studies. He graduated from Queens College with a degree in econometrics and medieval Hebrew literature.

In 2000, when Varnai was working as a paramedic for Jamaica Hospital, he saw an advertisement for the LSATs. On a whim, he took the test, did well, and began studying law at St. John’s University School of Law. After he graduated, Varnai worked as a legal aid attorney, but continued as a paramedic to make ends meet.

His professional paramedic career came to an end in 2007, when he was appointed a marshal of New York City. City marshals work independently from, but parallel with, the sheriff’s office, executing warrants and enforcing civil court orders. They’re also barred from having outside employment.

Though many marshals keep their jobs for decades, Varnai found himself getting restless after a few years. Much of his work involved serving eviction notices, breaking down doors to gain access to properties, and arguing with those being served. Varnai described the job as being the instrument of someone else’s bad day.

In 2010, he took the Foreign Service exam and two years later joined the diplomatic service. Today, he lives in Prague with his wife, Tamar, whose support he said has been critical to his success, both as a diplomat and a student. Foreign Service officers are considered generalists, he said, though they work in particular core areas. In Prague, Varnai works as an economics officer, which gives him a broad area of responsibility, since so many things involve money and finance.

The job also gave him the flexibility to pursue his degree in epidemiology and biostatistics at the Harvard Chan School, which fed his continued interest in health and medicine and which he plans to apply in his Foreign Service work. Varnai said he also benefits from the network of classmates he’s met through the course.

“I had a great time,” Varnai said. “I made more friends here than I did in college because it [Queens College] was commuter college. I still keep in touch with a lot of people.”