The poet and the paleontologist 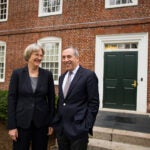 Award-winning writer Kevin Young ’92 developed many of the poems that became his dazzling 1993 debut, “Most Way Home,” while he was still a Harvard College student, so perhaps it was fitting — and even poetic — that he returned “home” to where it all started.

Though there weren’t any odes involving gumbo, aunties, or the Wu-Tang Clan, Young’s deep affinity for music, especially hip-hop (“It changed my life”), and the power of African-American culture and history shone through as Young read selections from his latest poetry collection, “Brown” (Knopf, 2018), as the featured poet of the 228th Phi Beta Kappa (PBK) Literary Exercises, held Tuesday morning at Sanders Theatre. The annual celebration marked the kickoff of Harvard’s Commencement week festivities.

Paleontologist Neil Shubin, Ph.D. ’87, the Bensley Professor of Organismal Biology and Anatomy at the University of Chicago, gave the traditional PBK oration, titled “Learning to See.” He spoke about how frustrated he was initially as a graduate student at Harvard when he would go on expeditions with the field’s leading experts to find fossils, but all he could see were piles of rocks. Eventually, he said, he learned what to look for, what to ignore, and then, seemingly in an instant, everywhere he looked he saw fossils.

Founded in 1776, Phi Beta Kappa is a national honors society that recognizes the outstanding academic achievement of college undergraduates. Honorees are the “best of the best.” They must not only maintain excellent grades, but do so across a breadth of study and pursue the most rigorous courses available. Harvard’s chapter, Alpha Iota of Massachusetts, held its first meeting in 1781. The participating 48 members of the Class of 2018 were formally inducted into the society during a ceremony held last fall.

Young’s book “Brown” refers not to the color, nor to the armed abolitionist John Brown, nor even to the “Godfather of Soul,” James Brown — though all are present — but to the woman who played piano on Sundays in Young’s hometown church back in Topeka, Kan. That was Linda Brown, better known as the plaintiff in the landmark Supreme Court decision against school segregation, Brown v. Board of Education. 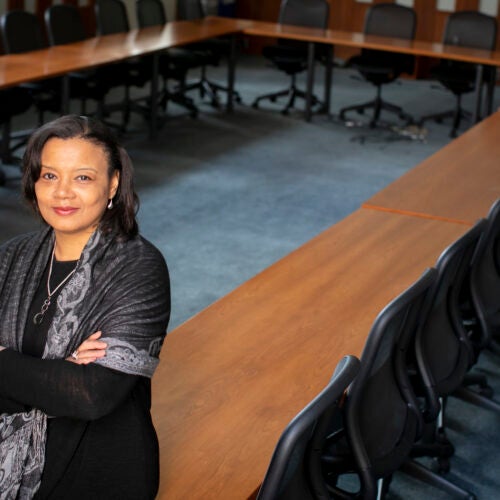 Reflecting on Charles Hamilton Houston, the Harvard Law grad who systematically questioned ‘separate but equal’ in the courts

Young read selections from a sonnet cycle, “De La Soul Is Dead” (the title taken from a 1991 album by the rap group De La Soul), which riffs on and reminisces about his youth. In hindsight, he wrote that it was a carefree time (“No one was dead yet,” he says in one poem), in which hip-hop’s golden age, 1988‒1992, synched up perfectly with his time at Harvard.

In a segment of “I Doubt It,” he compares that bygone era to the world his young son lives in, one that doesn’t afford him such luxuries.

Though we boys were full
of confidence. Sleeping bags
a war zone where nobody died.

to keep us company
till dawn. This is how
we learnt about tomorrow –

by the hand, somewhat
awake, sleeping
bag under your arm

empty as a chrysalis.

As a student, Young won the Thomas T. Hoopes Prize for his College thesis and studied under Harvard faculty Lucie Brock-Broido and Nobel Prize-winner Seamus Heaney. In 2003, he was named a Guggenheim Fellow and he is now poetry editor at The New Yorker. He also teaches creative writing at Emory University and is the director of the Schomburg Center for Research in Black Culture in New York City.

Seven members of the College Class of 1968 received honorary membership into the Harvard PBK chapter, along with Young and Shubin.