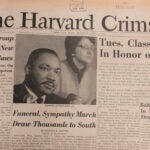 From a distance of 15 years and more than 3,000 miles, relatives of people killed by Bolivian security forces in 2003 have had their first taste of justice.

Brought by the families of eight of those slain, the lawsuit charged that Sánchez de Lozada and José Carlos Sánchez Berzaín orchestrated the use of military force to quash protests against the government. Bolivian soldiers killed 58 people, including children, and injured more than 400, nearly all from indigenous Aymara communities. The turmoil forced both defendants to resign and flee to the U.S., where they have lived ever since.

The lawsuit was brought to trial with the help of the International Human Rights Clinic, the practice arm of the Human Rights Program at Harvard Law School (HLS), under the Torture Victim Protection Act, which allows civil lawsuits in U.S. courts for extrajudicial killings.

For Teófilo Baltazar Cerro, who lost his pregnant wife and unborn child when they were shot inside their home, the jury’s decision is welcome news. Baltazar Cerro was among several relatives who traveled from La Paz to Fort Lauderdale to take part in the three-week trial.

“I swore on my wife’s grave I would seek justice no matter how long it would take and far I would have to travel,” said Baltazar Cerro by phone from Fort Lauderdale. “This is an example for the whole world to see, so that no other government officials can get away with killing innocent people in their countries and think they can find safe haven in the United States.”

At the opening of the trail on March 6, Etelvina Ramos Mamani described the death of her 8-year old daughter, Marlene, who was shot through the window of the family’s home. A bullet fired by Bolivian soldiers pierced her chest. According to newspaper reports, Ramos Mamani offered painful testimony when she said, “Blood was coming out of her chest like a fountain.”

For the International Human Rights Clinic, which has worked on the case since 2007, the trial is a notable achievement. In 2006, Thomas Becker, J.D. ’08, an HLS student at the time, brought the 2003 slayings to the clinic’s attention after a trip to Bolivia in 2005 left him pondering ways to seek justice for the victims’ families.

Becker, who has worked tirelessly on the case for the past decade, participated in the trial. The jury’s decision is a game-changer for human rights accountability and justice in Bolivia and around the world, he said, but also for the families.

“I’m proud of the plaintiffs, who fought tirelessly for well over a decade to hold these people accountable,” said Becker. “It’s been hard. They kept their wounds open to keep the struggle moving forward, and yet they were willing to do it so this doesn’t happen again.”

Over the past decade, dozens of HLS students have worked on the case, under the supervision of clinical professors Susan Farbstein, J.D. ’04, and Tyler Giannini. Students have drafted briefs, traveled to Bolivia on fact-finding missions, and prepared for oral arguments, all in hopes of bringing the suit to trial.

Farbstein and Giannini, who co-direct the International Human Rights Clinic, hailed the verdict, Giannini calling it “a clear signal that the U.S. is not a safe harbor for individuals who commit violent abuses and, just as importantly, it sends a message that no one is above the law.”

“This is a major win for our clients, who have fought so long and so hard to get justice for their loved ones,” said Farbstein. “It not only is a historic day for those who suffered in Bolivia, but the verdict advances global efforts to hold human rights abusers accountable.”

The trial’s significance was not lost on the Bolivian families, human rights lawyers, and on Bolivian President Evo Morales, who hailed the trial in a tweet. In 2005, Bolivia requested the extradition of the two politicians, but the U.S. government denied the petition. According to the Center for Constitutional Rights, part of the plaintiffs’ legal team, this was the first time in U.S. history that a former head of state sat before his accusers in an American human rights trial.

The plaintiffs are represented by a legal team that includes the Human Rights Clinic, the law firms of Akin Gump Strauss Hauer & Feld, LLP; Schonbrun Seplow Harris & Hoffman, LLP; Akerman LLP; and cooperating attorneys from the Center for Law, Justice and Society (Dejusticia).