A lasting legacy, now on view 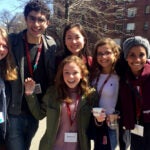 From Visitas participant to chronicler

Even as S. Allen Counter’s portrait was unveiled in the southeast corner of Annenberg Hall, artist Stephen Coit ’71 noted that there was a reason the picture was not in the center of the wall.

“Because there will be more,” said Coit. “This is just the beginning.”

Counter, the founding director of the Harvard Foundation for Intercultural and Race Relations who died last summer, helped bring to the walls of Harvard portraits of minorities who have made significant contributions to the University.

As the 19th picture in the Portraiture Project, Counter’s reflects the legacy of a leader whose impact is felt deeply both at Harvard and abroad.

In an emotional afternoon ceremony, his oldest daughter, Philippa, remembered her father as a Renaissance man who grew up in the Jim Crow South and “worked hard to achieve what he did.”

“Harvard University is a better place, a more welcoming place for students of all backgrounds because of him,” she said.

One such student who found a sense of home at Harvard through her work with Counter was Tiffany Ramos ’16.

“Dr. Counter was deeply devoted to our sense of belonging and our sense of empowerment,” said Ramos, who wrote a poem that read, in part: “To a man who taught dialogue over disengagement, inclusion over exclusion, determination over complacency … your legacy is forever, and we will make sure of it.”

Coit, who donated the portrait to the foundation, described his work in detail. One of the biggest challenges in creating the work was Counter’s yellow tie, his favorite. His lapel pin was the symbol of the Swedish consulate, where he had been an honorary consul. Behind the smiling, bespectacled Counter is a diverse group of students performing in the 2015 Cultural Rhythms at Sanders Theatre. Coit took the image from a YouTube video, though the surrounding circle of blue light on the stage remained a mystery.

Choking back tears, Coit said some who got an early look at the portrait suggested “the blue lights may be part of a halo.”

“It appears there in this portrait to remind all of us that you can’t always see a halo on those who are selected to have them when they are here with us,” Coit said.

Cultural Rhythms, a daylong celebration showcasing more than 30 student organizations, has become as popular a Harvard tradition as the foundation’s bestowal of its humanitarian award. Past recipients of that honor include Malala Yousafzai, Ban Ki-moon, and Rihanna. At Monday’s unveiling, another big-name guest, producer Debbie Allen (“Grey’s Anatomy,” “Fame”) called herself Counter’s “greatest fan.”

“Allen built bridges from Harvard to Hollywood to Sweden to the North Pole to the Suriname, always leaving a trail of hope and inspiring people to be more aware and more congenial and more loving,” said Allen, who plans produce a movie about Counter. “I told Steven Spielberg the real ‘Raider of the Lost Ark’ is Allen Counter.”