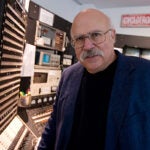 A lifetime of scholarship, recognized

To receive Harvard Foundation Humanitarian of the Year award

The Harvard Foundation has named U.N. Secretary-General Ban Ki-moon the 2014 Humanitarian of the Year. The award will be presented to Ban at a ceremony on Dec. 2.

During his visit, Ban will meet with Harvard President Drew Faust, as well as faculty and students during the Harvard Foundation’s scheduled programs.

A Harvard Kennedy School alumnus, Ban, M.C./M.P.A. ’84, is the fourth U.N. secretary-general honored by the Harvard Foundation during the past 30 years, following Kofi Annan in 1998, Boutros Boutros-Ghali in 1994, and Javier Pérez de Cuéllar in 1985.

The Humanitarian Award, which honors the late Rev. Professor Peter J. Gomes, Pusey Minister in the Memorial Church from 1974 to 2011, will be presented at the Memorial Church at 5 p.m., Dec. 2. The event is open to all Harvard students, faculty, and staff.