A message from the pope in the life of a saint 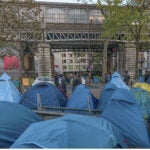 The day before a gunman shot him in the heart as he celebrated Mass, Salvadoran Archbishop Óscar Romero gave a powerful homily in which he urged soldiers to cease in the killing that was engulfing his country.

“The peasants you kill are your own brothers and sisters,” Romero pleaded in a sermon at the Cathedral of San Salvador. “In the name of God, and in the name of this suffering people, whose laments rise to heaven each day more tumultuous, I beg you, I beseech you, I order you, in the name of God: Stop the repression.”

The assassination, on March 24, 1980, intensified a civil war that would last 12 years. It also marked the beginning of Salvadorans’ veneration of Romero as a martyr and a saint.

Last month, just before the 38th anniversary of Romero’s murder, Pope Francis gave his blessing to his canonization, making official the sentiments of Salvadorans. In the Central American country, Romero is called the “people’s saint” for standing with the poor.

“What surprises me about Romero’s canonization is that it took so long and not that it’s happening now,” said June Erlick, who met Romero when she was working as an international correspondent in Central America in the late 1970s. “He gave his life in every sense, both in the pastoral and the political, for the people he was serving.”

Romero became archbishop in 1977, as the right-wing military government and left-wing political groups plunged into bloody confrontation. In sermons from the Cathedral’s pulpit, he spoke against injustice and human rights abuses by the military forces. In visits to small villages and slums, he listened more than he preached. Erlick, editor in chief of ReVista, a magazine published by the David Rockefeller Center for Latin American Studies, accompanied Romero on one such visit.

“What really impressed me was how much of a minister Romero was,” she said. “He wasn’t talking to these people about human rights abuses. He was there as a pastor, confirming young girls and boys, and mostly listening to what people had to say.”

The decision to canonize Romero represents a political statement from the Catholic Church, which wavered for many years on his nomination for sainthood, said Francis X. Clooney, Parkman Professor of Divinity at the Divinity School.

“When the pope makes him a saint, he’s saying that this is a model for Catholics everywhere in the world,” said Clooney. “Under previous popes, there were certain hesitations about Romero. But what Francis is saying is that the policies of the church should be on the side of those who are in need, and therefore the church should hold up, as an example for everyone, this man who gave his life for the sake of the poor.”

“What Francis is saying is that the policies of the church should be on the side of those who are in need, and therefore the church should hold up, as an example for everyone, this man who gave his life for the sake of the poor.”
— Francis X. Clooney, Parkman Professor of Divinity

Romero’s legacy weighs heavily in his country’s consciousness, said Professor Jocelyn Viterna, an expert in the Salvadoran civil war and director of undergraduate studies in the Department of Sociology. Sainthood ensures that Romero’s example will live on, she said.

“People would remember that he came to their villages, that he talked to them, that he shook hands, that he touched their children,” Viterna said. “But they also remembered that he saw the violence they were suffering and spoke out, when everyone else was pretending it didn’t exist, when the U.S. didn’t want to admit it was there, when the elites who were in power didn’t want to admit it was there. Romero named the violence. And that was critical not just for bringing more international attention to El Salvador but also for the dignity of people who were suffering.”

“If we want to see what the canonization of Romero really means, we have to look at five, 10 years from now not only in El Salvador and Central America but also around the Catholic Church,” said Clooney. “Does the example of Romero make Catholics elsewhere in the world change their lives? Does it tip the balance in the church on behalf of the poor?”