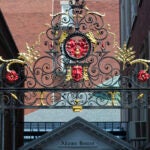 Divinity School’s Cnossen pushes himself in body and spirit

This time it wasn’t about the medals. For Daniel Cnossen, it was about recapturing what drove his passion for the Navy SEALs: discipline, intensity, training, focus, commitment, and teamwork. And it was about adding another challenge to the adventure he’s lived since losing both his legs above the knee to an improvised explosive device in Afghanistan.

That devastating experience, in 2009, only fueled Cnossen’s competitive drive. Over the past eight years, Cnossen, currently a candidate for a master’s in theology at Harvard Divinity School, has hit the track, the pool, the weights, the paddle board, and above all the ski trails, keeping himself physically and mentally sharp and reconnecting with the outdoors.

And while his go-to mantra has become “the effort is the success,” Cnossen’s work in the woods, in the gym, on the Charles River, and at HDS, where his classmates and professors have helped him focus on “what matters,” proved a winning combination last month at the Paralympics in  Pyeongchang, South Korea.

As a member of the U.S. Nordic skiing team, Cnossen captured one gold medal, one bronze, and four silver, securing a spot on the podium in every event he entered: the sprint, 7.5, the 15k sitting cross-country races, and the 7.5, 12.5k, and 15k sitting biathlons.

On a recent afternoon, just back from the closing ceremonies, Cnossen reflected on challenges on and off the ski track. According to the farm boy from Topeka, Kan., Harvard has played a pivotal role in overcoming them.

“I think the educational program at HDS is making me a better person,” said the retired lieutenant commander, whose time at the Kennedy School, where he earned a master’s in public administration in 2016, introduced him to scholars of different perspectives who shared his interest in politics and humanitarian work. One was Ali Asani, a professor of Indo-Muslim and Islamic religion and cultures, who became an important mentor and helped guide Cnossen to the Divinity School.

Cnossen considers his coursework in religion, ethics, and politics “applied philosophy, because it exists in the world in the form of belief systems that do affect how people act and see things.”

His HDS curriculum, which includes texts by “wonderful philosophers and ethicists,” has led Cnossen to more “refined questions about existence and purpose and meaning,” and to a refined definition of success.

“What is success? We as a society attribute it to medals. I don’t think that’s the right form of success for me at the personal level. It’s more about, ‘Do I love this? Does my body still tell me it wants to do this? Does my happiness increase because I am doing this?’” The answer to all those questions, he said, is “yes.”

Four years ago, as a full-time athlete living in Colorado, Cnossen felt pressure to bring back a medal from his first Paralympics. This time around, his classroom experience altered his perspective on competition.

“I did draw upon the classes that I have taken at the Divinity School to help get me get in this mental space that I felt like would be ideal for performance, and I think it really worked.”

What also helped was “meeting so many people and experiencing so many new ideas,” he said, and juggling skiing with a full-time course load. “So much of my day is taken up by things that are not in any way related to skiing or results … that has just been so much better for me.”

Even as he’s pushed his body to the limit, Cnossen has let his spirit reconnect with nature. 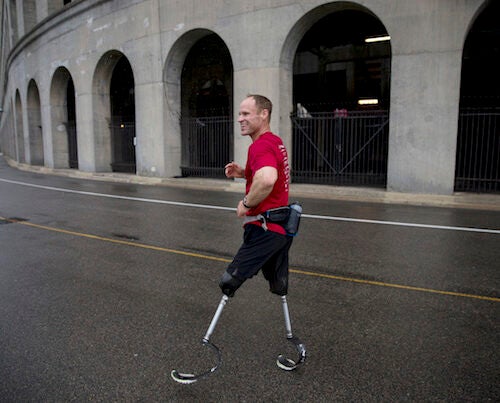 Before Afghanistan, he was an avid explorer and mountaineer who had trekked to Patagonia and Alaska and hiked in California’s Yosemite Valley. Since his war service, “things that are vertical” have been challenging, he admitted. Seated cross-country skiing was a way to test his physical and mental strength. It was also a chance to get lost in the woods.

“There’ve been days that I have been out, snow softly falling, no one else on the trail, going through pines,” said Cnossen. “That’s why I do this.”

More cross-country competitions are in his future, including a 50-kilometer race on a glacier in Iceland at the end of this month, and the World Para Nordic Skiing Championships in Prince George, British Columbia, Canada, next year. No doubt, he’ll carry his Harvard experience with him.

In addition to being physically and mentally tougher and wiser, Cnossen said he now also has the “maturity to realize that the medal stuff, it just subsides … the journey is what you should enjoy.”