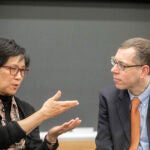 The problem is obvious: The U.S. lags far behind other countries in terms of maternal and parental leave. But the remedies are complex.

No single evidence-based solution presented itself as the “Gender Equality: It’s About Time” conference on Friday turned toward public policy. However, on the second day of a two-day conference presented by the Weatherhead Initiative on Gender Inequality, a number of intriguing suggestions were raised, all posing possible ways forward.

Bringing together scholars from Europe as well as the U.S., the conference focused on different national contexts and state policies, with the goal of comparing methods and results.

As conference organizer and initiative co-director Mary Brinton, Reischauer Institute Professor of Sociology, noted beforehand, maternal or parental leave is key to solving gender inequality: “There’s a well-established wage penalty that women face when they become mothers, or they are more or less forced out of the workplace because they can’t convert their jobs to a part-time job. What are the possibilities and how can we think about pushing the implementation of policies at the level of the workplace that lessen gender inequality?”

To open the discussion, Monika Queisser, head of the division for social policy at the Organization for Economic Cooperation and Development (OECD), based in France, spoke about parental leave policies in OECD countries. Outlining the stark comparison between most of Europe, where leave is measured in months, and the U.S., where only five states have mandated leave to supplement temporary disability insurance and the Family Medical Leave Act, Queisser discussed the implications of that predicament. While the effects on the parents — and on a nation’s overall labor participation — may be obvious, study has now progressed to the implications on the well-being of children, said Queisser.

“We need to think about child development and the way nations think about their children,” she said, noting that children benefit when their mothers have less stress and more financial stability. “We would argue that it is not acceptable for nations not to think of children as their responsibility.”

Maya Rossin-Slater, assistant professor of health research at Stanford University School of Medicine, looked at existing policies in the U.S. Because of restrictions on the Family Medical Leave Act, she said, many private-sector employees aren’t covered. Therefore, many single mothers and those in otherwise financially challenged situations cannot afford to take leave.

In states where paid leave is mandated, such as California, the rate of leave-taking is doubled for mothers with infants under the age of 1, from three weeks on average to six weeks, with the largest estimated effects for economically disadvantaged families. For mothers, she continued, this means a higher employment rate nine to 12 months after childbirth and more work hours and higher wages in the child’s second year.

Rossin-Slater compared these policies to Norway’s, where paid maternity leave was introduced in 1979, resulting in improved outcomes for children. The largest implications were for the least advantaged children, a result that she concluded has “the most implications for the U.S. as we consider such policies.”

Christopher Ruhm, professor of public policy and economics at the University of Virginia, discussed the differences between the European and U.S. markets. “If we were to put in a six-month parental leave policy here, we don’t have a clue what would happen,” he said. “We need to be careful.”

For example, he said, in Europe and Asia, increased fertility is a major goal since birth rates decline and can threaten national productivity. In the U.S., fertility is not an issue, although basic concerns of gender equity, family well-being, and child and maternal health are.

This has implications as the country wrestles with the costs of new policies and fiscal responsibility. Ruhm said that the current U.S. political climate has resulted in some odd dichotomies. For example, although business coalitions tend to fight the idea of paid leave, studies show that individual employers actually favor it. “People like these policies,” he said. “They think they’re important, and they might be willing to pay for them.”

In a Q&A session led by Claudia Olivetti, economics professor at Boston College, more unexpected results were discussed. For academics, prolonging the “tenure clock,” for example, was first introduced as a parental benefit to allow additional time for childcare and bonding. The benefit has been most often utilized by women. However, as men increasingly take advantage of this extra time, ostensibly for parenting, their productivity has increased. “Men are publishing more,” said Rossin-Slater. “While the women are actually taking that extra year for childcare, they are being judged against the standards of men — so the gender-equality policy backfires.”

Noting the “complexity of these issues and how they interact,” Olivetti concluded: “It’s about time to talk about this.”