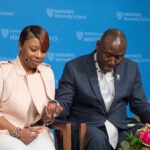 Afro-Brazilian activist Marielle Franco, set to speak at symposium, was gunned down last month in Rio

The recent killing of Brazilian politician and human rights activist Marielle Franco in downtown Rio de Janeiro, in what appeared to be a targeted assassination, brought massive protests in her home country and condemnation around the world.

At Harvard, where Franco was set to speak at a symposium about the living conditions of black Brazilians, her death came as a jolt, and imbued the event with a sense of loss.

“It’s a tragedy in so many ways,” said symposium co-organizer Sidney Chalhoub, professor of Latin American history and of African and African American Studies. “Franco’s death is a serious setback for the struggle of Brazilians of African descent for a more equal society in Brazil.”

A black woman who rose from a Rio slum to attend college and become a sociologist, Franco focused her activism on the plight of the poor, women’s rights, and police brutality. On March 14, the day after condemning the police killing of a young black man, she was gunned down in a drive-by shooting.

The weekend conference, sponsored by the Afro-Latin American Research Institute (ALARI) at the Hutchins Center, will be dedicated in memory of Franco’s work as a scholar and activist, said Chalhoub, who is co-organizing the event with Alejandro de la Fuente, the Robert Woods Bliss Professor of Latin American History and Economics and Professor of African and African American Studies, and founding  director of the institute.

“She represented a change in Brazilian society,”  Chalhoub said. “She was a black woman, a lesbian, a socialist, a college-educated person from a poor background. She was everything that could represent a more inclusive society.”

The conference is part of an initiative to promote the work of activists and scholars committed to social and racial justice in Latin America, in the context of the International Decade for People of African Descent (2015‒2024). Last year, the institute hosted a symposium on Cubans of African descent.

At nearly 110 million people, Brazil’s black population is the world’s largest after Nigeria. More African slaves were brought to Brazil than to the U.S. in the early 19th century. Today, despite a reputation for “racial democracy,” the country is deeply segregated along racial lines, Chalhoub said.

Over the past 15 years, the Brazilian government, under the leftist Workers’ Party, has tried to make amends for the country’s history of racial and social inequities, in part through affirmative action and education in African history and culture. Social policies that reward poor families with cash for vaccination and school enrollment have helped lift nearly 20 million Brazilians, many of them black, out of poverty.

But Franco’s death shows that gains by black Brazilians are still tenuous. Of 51 city councilors in Rio, Franco was the only black woman. Her death, which came a month after a presidential order put the military in charge of public security in the city, is a sign of the risks activists face in Brazil, Chalhoub said.

“Franco’s murder is not an isolated case,” he said. “Dozens and dozens of activists have been killed in many parts of the country. But there is something routine about the killings of poor people, most of whom happen to be black, and it is that you never find out who the killers were.

“We may never know, but we need to hold the Brazilian government accountable for her killing.”